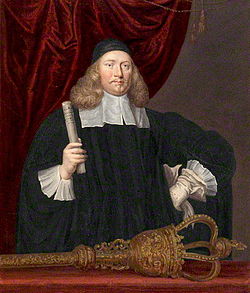 Edward Turnor was son of Arthur Turnor of Little Parndon, Essex. Passing from Abingdon School to Queen's College, Oxford, he became a barrister, called at Middle Temple, and member of parliament in turn for Essex (1654–61) and Hertford (1661–71). It was while Turnor sat for Hertford that he served as Speaker of the Commons (1661–71) and Solicitor General. He was knighted in (1660).[1]

According to Geoffrey Robertson (in his book, The Tyrannicide Brief), a "Sir Edward Turner" (sic) was a "Counsel for the Victim" (the Duke of York) in the 1660 regicide trials (see pages 291 and 303 of the Vintage paperback edition). Evidence supporting the argument that Robertson misspelt "Turnour" as "Turner" includes the entry for Sir Edward Turnour provided in “The judges of England, from the time of the Conquest” by Edward Foss.

Turnor was one of the judges appointed under the Fire of London Disputes Act 1666 to deal with property disputes arising as a result of the Great Fire of London.[2]

He died on circuit in Bedford on 4 Mar 1676 and was buried at Little Parndon. His son Edward was MP for Orford, Suffolk.