Edward of Middleham, Prince of Wales

Edward of Middleham, Prince of Wales, Earl of Chester, Duke of Cornwall, 1st Earl of Salisbury (December 1473 – 9 April 1484), was the only child of King Richard III of England and his queen consort, Anne Neville. He was Richard's only legitimate child and died aged ten.[1]

In 1485 Richard III was killed at the Battle of Bosworth and the throne of England passed to the Lancastrian claimant, Henry Tudor, a descendant of Edward III of England through his mother, Lady Margaret Beaufort.

Edward was allegedly born in December 1473[2] at Middleham Castle, a stronghold close to York that became Richard and Anne's principal base in northern England.[3] The date of 1473 is, however, not universally accepted; Professor Charles Ross wrote that the date 1473 "lacks authority. In fact, he was probably not born until 1476."[4] The act of Parliament that settled the dispute between George of Clarence and Richard over Anne Beauchamp's inheritance just as if the Countess of Warwick "was naturally dead" was dated May 1474.[5] The doubts cast by Clarence on the validity of Richard and Anne's marriage were addressed by a clause protecting their rights in the event they were divorced (i.e. of their marriage being declared null and void by the Church) and then legally remarried to each other, and also protected Richard's rights while waiting for such a valid second marriage with Anne.[6] There were no provisions, however, for their heirs in case of this said divorce, which seems to confirm Richard and Anne had no children as of 1474. But such provision was the provence of the ruling king for those of royal blood so would have been moot.

Edward was mostly kept at Middleham, and was known to be a sickly child.[7]

On 26 June 1483, his father became King of England, following a sermon preached outside St Paul's Cathedral which declared the late King Edward IV's children illegitimate and his brother, Richard, the rightful king. After the citizens of London, nobles, and commons convened, a petition was drawn up that asked Richard to assume the throne. He accepted and was crowned at Westminster Abbey on 6 July 1483, along with his wife. His title to the throne was later confirmed by Parliament in January 1484 by the document Titulus Regius.

Edward did not attend his parents' coronation, likely due to illness.[3] He was created Prince of Wales and Earl of Chester in a splendid ceremony in York Minster on 8 September 1483, following his parents' Royal Progress across England.[8]

The reasons of his sudden death are unknown. The Croyland Chronicle reads:

Edward's sudden death left Richard without a legitimate child and heir.[10] Contemporary historian John Rous recorded that Richard declared his nephew Edward, Earl of Warwick, his heir in his place, but there is no other evidence of this.[11] Similarly, John de la Pole, 1st Earl of Lincoln also seemed to have been designated as Richard's new heir, but was never publicly proclaimed as such.[12]

Richard's enemies were inclined to believe that Edward's sudden death was divine retribution for Richard's involvement in the usurpation and subsequent disappearance of the sons of Edward IV, Edward V of England and Richard, Duke of York. 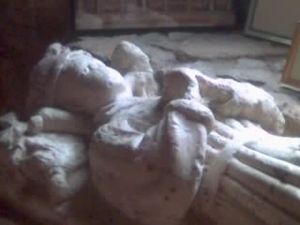 Cenotaph at Sheriff Hutton Church long believed to represent Edward of Middleham, but now thought to be an earlier work.

The location of Edward's burial is unknown. A mutilated white alabaster cenotaph ("empty tomb")[13] in the church at Sheriff Hutton with an effigy of a child was long believed to represent Edward of Middleham, but is now thought to be an earlier work depicting one of the Neville family.[14]

It is perhaps most probable that Edward, having died in Middleham Castle, was buried in the nearby parish church of Saints Mary and Alkelda in Middleham, where his father had intended to found a college. However evidence for this suggestion is lacking.

Edward of Middleham appeared in Sharon Penman's The Sunne in Splendour and in Sandra Worth's The Rose of York series. In the latter series, it is implied that Edward was poisoned at the behest of Margaret Beaufort as part of her efforts to secure the throne for her son, the eventual Henry VII.

Since 1483, Edward used the arms of his father; debruised with a label of three points Argent.