Edwin Arlington Robinson (22 December 1869 – 6 April 1935) was an American poet. Robinson won the Pulitzer Prize for Poetry on three occasions and was nominated for the Nobel Prize in Literature four times.[2]

Robinson was born in Head Tide, Lincoln County, Maine, but his family moved to Gardiner, Maine, in 1871. He described his childhood in Maine as "stark and unhappy".[3] His parents were Edward and Mary née Palmer. They had wanted a girl, and did not name him until he was six months old, when they visited a holiday resort—at which point other vacationers decided that he should have a name, and selected the name "Edwin" from a hat containing a random set of boy's names. The man who drew the name was from Arlington, Massachusetts, so "Arlington" was used for his middle name.[4] Throughout his life, he hated not only his given name but also his family's habit of calling him "Win". As an adult, he always used the signature "E. A."[5] 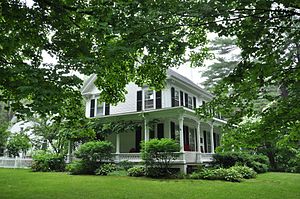 Robinson's early struggles led many of his poems to have a dark pessimism and his stories to deal with "an American dream gone awry."[6] His eldest brother, Dean Robinson, was a doctor and had become addicted to laudanum while self-medicating for neuralgia.[7] The middle brother, Herman, a handsome and charismatic man, married the woman Edwin loved, Emma Löehen Shepherd.[8] Emma thought highly of Edwin and encouraged his poetry,[8] but he was deemed too young to be in realistic competition for her hand, which didn't keep him from being rattled deeply by witnessing what he considered her being bamboozled by Herman's charm and choosing shallowness over depth.[7] The marriage was a great blow to Edwin's pride, and during the wedding ceremony, February 12, 1890, the despondent poet stayed home and wrote a poem of protest, "Cortège", the title of which refers to the train that took the newly married couple out of town to their new life in St. Louis, Missouri.[5] Herman Robinson suffered business failures, and also started working life as an alcoholic, and ended up estranged from his wife and children. Herman died impoverished in 1909 of tuberculosis at Boston City Hospital. Robinson's poem Richard Cory was thought by Emma (Herman's wife) to refer to her husband.[9]

At the age of 21, Robinson entered Harvard University as a special student. He took classes in English, French, and Shakespeare, as well as one on Anglo-Saxon that he later dropped. He did not aim to get all A's; as he wrote his friend Harry Smith, "B, and in that vicinity, is a very comfortable and safe place to hang."

His real desire was to get published in one of the Harvard literary journals. Within the first fortnight of being there, The Harvard Advocate published Robinson's "Ballade of a Ship." He was even invited to meet with the editors, but when he returned, he complained to his friend Mowry Saben, "I sat there among them, unable to say a word."

Edwin's father, Edward, died after Edwin's first year at Harvard. Edwin returned to Harvard for a second year, but it was to be his last one as a student there. Though short, his stay in Cambridge included some of his most cherished experiences, and there he made his most lasting friendships. He wrote his friend Harry Smith on June 21, 1893:

I suppose this is the last letter I shall ever write you from Harvard. The thought seems a little queer, but it cannot be otherwise. Sometimes I try to imagine the state my mind would be in had I never come here, but I cannot. I feel that I have got comparatively little from my two years, but still, more than I could get in Gardiner if I lived a century.

Robinson had returned to Gardiner by mid-1893. He had plans to start writing seriously. In October he wrote his friend Gledhill:

Writing has been my dream ever since I was old enough to lay a plan for an air castle. Now for the first time I seem to have something like a favorable opportunity and this winter I shall make a beginning. 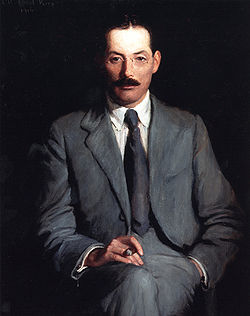 With his father gone, Robinson became the man of the household. He tried farming and developed a close relationship with his brother's wife Emma Robinson, who after her husband Herman's death, moved back to Gardiner with her children. She twice rejected marriage proposals from Edwin, after which he permanently left Gardiner. He moved to New York, where he lived as an impoverished poet while cultivating friendships with other writers, artists, and intellectuals. In 1896, he self-published his first book, The Torrent and the Night Before, paying 100 dollars for 500 copies.[citation needed] Robinson meant it as a surprise for his mother. Days before the copies arrived, his mother died of diphtheria.

His second volume, Children of The Night, had a somewhat wider circulation. Its readers included President Theodore Roosevelt's son Kermit, who had received a copy from his teacher, who happened to be a friend of Robinson. Kermit then recommended it to his father, who, impressed by the poems and aware of Robinson's straits, invited Robinson to join him for dinner at the White House (though Robinson declined due to his lacking "suitable clothes"[10]) and in 1905 offered the writer a sinecure at the New York Customs Office. According to Edmund Morris, author of Theodore Rex, a tacit condition of his employment was that, in exchange for his desk and two thousand dollars a year, he should work "with a view to helping American letters", rather than the receipts of the United States Treasury. Robinson remained in the job until Roosevelt left office.[11] In 1913, Robinson lived on Lighthouse Hill, Staten Island.[12]

Gradually his literary successes began to mount. He won the Pulitzer Prize three times in the 1920s,[13] and he was described as "more artful than Hardy and more coy than Frost and a brilliant sonneteer".[14] During the last 20 years of his life he became a regular summer resident at the MacDowell Colony in New Hampshire, where several women made him the object of their devoted attention.[15] Robinson and artist Elizabeth Sparhawk-Jones visited MacDowell at the same times over a cumulative total of ten years.[16] They had a romantic relationship in which she was in love with him,[17] devoted to him and understood him, and was relaxed in her approach with him. He called her Sparhawk and was courteous towards her.[18] They had a relationship that D. H. Tracy described as "courtly, quiet, and intense".[18] She described him as a charming, sensitive, and emotionally grounded man with high moral values.[18]

Robinson never married.[15] He died of cancer on April 6, 1935, in the New York Hospital (now New York Cornell Hospital) in New York City.[19] When he died, Sparhawk-Jones attended his vigil and then painted several works in his memory.[18]