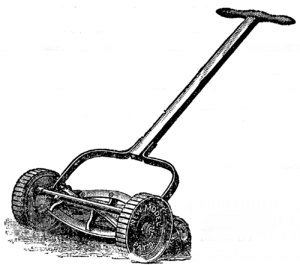 Budding had the idea of the lawnmower after seeing a machine in a local cloth mill which used a cutting cylinder (or bladed reel) mounted on a bench to trim the irregular nap from the surface of woollen cloth and give a smooth finish.[1] Budding's mower was designed primarily to cut the lawn on sports grounds and extensive gardens, as a superior alternative to the scythe, and was granted a British patent on 31 August 1830.[2] It took ten more years and further innovations to create a machine that could be worked by animals, and sixty years before a steam-powered lawn mower was built. The first machine produced was 19 inches in width with a frame made of wrought iron. The mower was pushed from behind with the motive power coming from the rear land roller which drove gears to transfer the drive to the knives on the cutting cylinder; the ratio was 16:1. There was another roller placed in between the cutting cylinder and the land roller which was adjustable to alter the height of cut. On cutting, the grass clippings were hurled forward into a tray like box. It was soon realized, however, that an extra handle was needed in front of the machine which could be used to help pull it along. Two of the earliest Budding machines sold went to Regent's Park Zoological Gardens in London and the Oxford Colleges.[3] In an agreement between John Ferrabee and Edwin Budding, dated 18 May 1830, Ferrabee paid the costs of development, obtained letters of patent and acquired rights to manufacture, sell and license other manufacturers in the production of lawn mowers. Budding realised that a similar device could be used to cut grass if the mechanism was mounted in a wheeled frame to make the blades rotate close to the lawn's surface. Budding went into partnership with a local engineer, John Ferrabee, and together they made mowers in a factory at Thrupp near Stroud.[4]

Examples of the early Budding type mowers can be seen in Stroud Museum, the London Science Museum and at Milton Keynes Museum.

Budding is also credited with the invention of the screw adjustable spanner.[5]