Edwin Thomas Booth (November 13, 1833 – June 7, 1893) was a famous 19th-century American actor who toured throughout America and the major capitals of Europe, performing Shakespearean plays. In 1869 he founded Booth's Theatre in New York, a spectacular theatre that was quite modern for its time.[2] Some theatrical historians consider him the greatest American actor, and the greatest Hamlet, of the 19th century.[3] However, his achievements are often overshadowed by his relationship with his brother, John Wilkes Booth, the man who assassinated President Abraham Lincoln.

Booth was born in Bel Air, Maryland, into the English American theatrical Booth family. He was the illegitimate son of another famous actor, Junius Brutus Booth, an Englishman, who named Edwin after Edwin Forrest and Thomas Flynn, two of Junius' colleagues. He was the older brother of John Wilkes Booth, himself a successful actor who gained notoriety as the assassin of President Lincoln.

Nora Titone, in her book My Thoughts Be Bloody, recounts how the shame and ambition of Junius Brutus Booth's three illegitimate actor sons, Junius Brutus Booth, Jr. (who never achieved the stage stardom of his two younger actor brothers), Edwin Booth, and John Wilkes Booth, spurred them to strive, as rivals, for achievement and acclaim—Edwin, a Unionist, and John Wilkes, a Confederate and the assassin of Abraham Lincoln.[4]

In early appearances, Booth usually performed alongside his father, making his stage debut as Tressel or Tressil in Colley Cibber's version of Richard III in Boston in 1849. His first appearance in New York City was in the character of Wilford in The Iron Chest, which he played at the National Theatre in Chatham Street, on the 27th of September 1850. A year later, on the illness of the father, the son took his place in the character of Richard III.[5]

After his father's death in 1852, Booth went on a worldwide tour, visiting Australia and Hawaii, and finally gaining acclaim of his own during an engagement in Sacramento, California, in 1856.[6]

Before his brother assassinated Lincoln, Edwin had appeared with his two brothers, John Wilkes and Junius Brutus Booth Jr., in Julius Caesar in 1864. John Wilkes played Marc Antony, Edwin played Brutus, and Junius played Cassius. It was a benefit performance, and the only time that the three brothers appeared together on the same stage. The funds were used to erect a statue of William Shakespeare that still stands in Central Park just south of the Promenade. Immediately afterwards, Edwin Booth began a production of Hamlet on the same stage, which came to be known as the "hundred nights Hamlet", setting a record that lasted until John Barrymore broke the record in 1922, playing the title character for 101 performances.

From 1863 to 1867, Booth managed the Winter Garden Theatre in New York City, mostly staging Shakespearean tragedies. In 1863, he bought the Walnut Street Theatre in Philadelphia.[7]

After John Wilkes Booth's assassination of President Lincoln in April 1865, the infamy associated with the Booth name forced Edwin Booth to abandon the stage for many months. Edwin, who had been feuding with John Wilkes before the assassination, disowned him afterward, refusing to have John's name spoken in his house.[8] He made his return to the stage at the Winter Garden Theatre in January 1866, playing the title role in Hamlet,[6] which would eventually become his signature role. 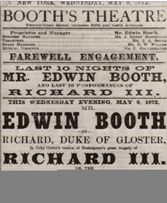 Booth's Theatre Playbill of his Richard III circa 1872

In 1867, a fire damaged the Winter Garden Theatre, resulting in the building's subsequent demolition. Afterwards, Booth built his own theatre, an elaborate structure called Booth's Theatre in Manhattan, which opened on February 3, 1869, with a production of Romeo and Juliet starring Booth as Romeo, and Mary McVicker as Juliet. Elaborate productions followed, but the theatre never became a profitable or even stable financial venture. The panic of 1873 caused the final bankruptcy of Booth's Theatre in 1874. After the bankruptcy, Booth went on another worldwide tour, eventually regaining his fortune.

Booth was married to Mary Devlin from 1860 to 1863, the year of her death. They had one daughter, Edwina, born on December 9, 1861, in London.The shock of Mary's death and him not being able to be by her side at the time due to him usually unable to come after hard drinking led him to become abstinent. He later remarried, wedding his acting partner Mary McVicker in 1869, and became a widower again in 1881. 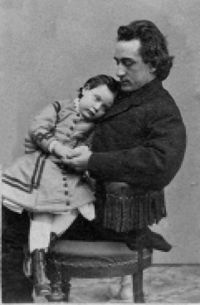 Edwin Booth with daughter Edwina, circa 1864

In 1869, Edwin acquired his brother John's body after repeatedly writing to President Andrew Johnson pleading for it. Johnson finally released the remains, and Edwin had them buried, unmarked, in the family plot at Green Mount Cemetery in Baltimore. 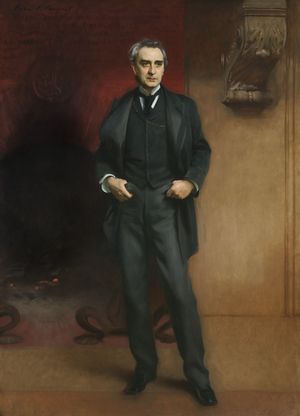 Portrait of Edwin Booth by John Singer Sargent, 1890, which hung at the Players Club. Now in the collection of the Amon Carter Museum of American Art.

In 1888, Booth founded the Players' Club, for actors and others associated with the arts, and dedicated his home on Gramercy Park to it.

His final performance was, fittingly, in his signature role of Hamlet, in 1891 at the Brooklyn Academy of Music.

Edwin Booth had a small stroke (1891) which made his health rapidly decline after the event. On April 1893 he had another stroke which made his health worse and in the end died June 1893 at the Players', and was buried next to his first wife at Mount Auburn Cemetery in Cambridge, Massachusetts.His bedroom in the club has been kept untouched since his death.[9] The New York Times also wrote an article of his sad departure shown here.[10]

Edwin Booth saved Abraham Lincoln's son,[11] Robert, from serious injury or even death. The incident occurred on a train platform in Jersey City, New Jersey. The exact date of the incident is uncertain, but it is believed to have taken place in late 1864 or early 1865. Robert Lincoln recalled the incident in a 1909 letter to Richard Watson Gilder, editor of The Century Magazine.

The incident occurred while a group of passengers were late at night purchasing their sleeping car places from the conductor who stood on the station platform at the entrance of the car. The platform was about the height of the car floor, and there was of course a narrow space between the platform and the car body. There was some crowding, and I happened to be pressed by it against the car body while waiting my turn. In this situation the train began to move, and by the motion I was twisted off my feet, and had dropped somewhat, with feet downward, into the open space, and was personally helpless, when my coat collar was vigorously seized and I was quickly pulled up and out to a secure footing on the platform. Upon turning to thank my rescuer I saw it was Edwin Booth, whose face was of course well known to me, and I expressed my gratitude to him, and in doing so, called him by name.

Booth did not know the identity of the man whose life he had saved until some months later, when he received a letter from a friend, Colonel Adam Badeau, who was an officer on the staff of General Ulysses S. Grant. Badeau had heard the story from Robert Lincoln, who had since joined the Union Army and was also serving on Grant's staff. In the letter, Badeau gave his compliments to Booth for the heroic deed. The fact that he had saved the life of Abraham Lincoln's son was said to have been of some comfort to Edwin Booth following his brother's assassination of the president.

Statue of Booth as Hamlet, Gramercy Park by Edmond T. Quinn, circa 1916

Edwin's acting style was distinctly different from that of his father. While the senior Booth was, like his contemporaries Edmund Kean and William Charles Macready, strong and bombastic, favoring characters such as Richard III, Edwin played more naturalistically, with a quiet, more thoughtful delivery, tailored to roles like Hamlet.

A number of modern dramatizations have been made of Edwin Booth's life, on both stage and screen. One of the best known is the 1955 film Prince of Players written by Moss Hart, based loosely on the popular book of that name by Eleanor Ruggles. It was directed by Philip Dunn and stars Richard Burton and Raymond Massey as Edwin and Junius Brutus Booth, Sr., with Charles Bickford and Eva Le Gallienne, who plays Gertrude to Burton's Hamlet. The film depicts events in Booth's life well before, and then surrounding, the assassination of Lincoln by Booth's younger brother.[12]

The Brothers BOOTH!, by W. Stuart McDowell, which focuses on the relationships of the three Booth brothers leading up to the assassination of Lincoln, was workshopped and given a series of staged readings featuring David Strathairn, David Dukes, Angela Goethals, Maryann Plunkett, and Stephen Lang at the New Harmony Project,[13] and at The Guthrie Theatre Lab in Minneapolis, and later presented in New York at the Players' Club, the Second Stage Theatre, and the Boston Athenaeum. It was given its first fully staged professional production at the Bristol Riverside Theatre outside Philadelphia in 1992.[14][15][16] A second play by the same name, The Brothers Booth, which focuses on "the world of the 1860s theatre and its leading family"[17] was written by Marshell Bradley and staged in New York at the Perry Street Theatre in 2004. 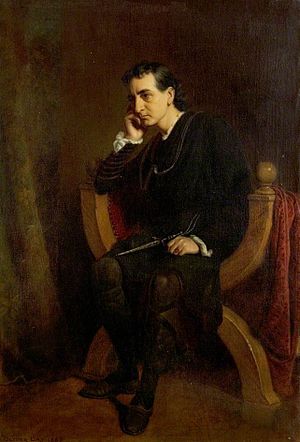 Austin Pendleton's play, Booth, which depicts the early years of the brothers Edwin, Junius, and John Wilkes Booth and their father, was produced off Broadway at the York Theatre, starring Frank Langella as Junius Brutus Booth, Sr. In a review, the play was called "a psychodrama about the legendary theatrical family of the 19th century" by the New York Times.[18] Pendleton had adapted this version from his earlier work, Booth Is Back, produced at Long Wharf Theatre in New Haven, Connecticut, in the 1991-1992 season.

The Tragedian, by playwright and actor Rodney Lee Rogers, is a one-man show about Booth that was produced by PURE Theatre of Charleston, South Carolina, in 2007. It was revived for inclusion in the Piccolo Spoleto Arts Festival in May and June 2008.[19]

A play by Luigi Creatore called Error of the Moon played off-Broadway on Theatre Row in New York City from August 13 to October 10, 2010. The play is a fictionalized account of Booth's life, hinging on the personal, professional, and political tensions between brothers Edwin and John Wilkes, leading up to the assassination of Lincoln.[20]

In 1959, the actor Robert McQueeney played Booth in the episode "The Man Who Loved Lincoln" on the ABC/Warner Brothers western television series, Colt .45, starring Wayde Preston as the fictitious undercover agent Christopher Colt, who in the story line is assigned to protect Booth from a death threat.[21]

In 1966, Martin Landau played Edwin Booth in the episode "This Stage of Fools" of the NBC western television series, Branded, starring Chuck Connors as Jason McCord. In the story line, McCord takes a job as the bodyguard to the actor Edwin Booth, brother of the presidential assassin, John Wilkes Booth.[22][23]

In 2013, Will Forte played Edwin Booth in the "Washington, D.C." episode of the Comedy Central's series, Drunk History, created by Derek Waters.

In December 2010, descendants of Edwin Booth reported that they obtained permission to exhume the Shakespearean actor's body to obtain DNA samples to compare with a sample of his brother John's DNA to refute the rumor he had escaped after the assassination. However, Bree Harvey, a spokesperson from the Mount Auburn Cemetery in Cambridge, Massachusetts, where Edwin Booth is buried, denied reports that the family had contacted them and requested to exhume Edwin's body.[24] The family hopes to obtain DNA samples from artifacts belonging to John Wilkes, or from remains such as vertebrae stored at the National Museum of Health and Medicine in Maryland.[25][26] On March 30, 2013, museum spokesperson Carol Johnson announced that the family's request to exhume DNA from the vertebrae had been rejected.[27] 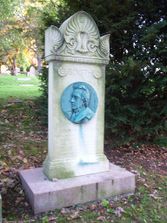