Eel Pie Island is an island in the River Thames at Twickenham in the Borough of Richmond upon Thames, London. It is situated on the Tideway and can be reached only by footbridge or boat. The island was known as a major jazz and blues venue in the 1960s.

Eel Pie Island was earlier called Twickenham Ait and, before that, The Parish Ait; even earlier the island was three separate aits. A bridge to the island was proposed in 1889, but it was not until 1957 that one was completed. Today, the island has about 50 houses with 120 inhabitants, a couple of boatyards and some small businesses and artists' studios. It has nature reserves at either end, but there is no public access to these.

The island is privately owned and the public can only access the main pathway from the bridge, passing all the doors and gates of the houses and businesses on the island. On a few weekends a year, usually in June and December and dubbed "Artists' Open Studios", the public are invited to visit the collection of art studios, known as Eel Pie Island Art Studios.

The Eel Pie Studios or Oceanic Studios at The Boathouse on the mainland nearby, formerly owned by Pete Townshend, were the location of several significant pop and rock recordings. Townshend's publishing company, Eel Pie Publishing, is also named after the ait. 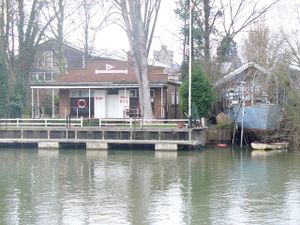 The island is also home to Twickenham Rowing Club, one of the oldest rowing clubs on the Thames, and Richmond Yacht Club.

The island was the site of the now legendary Eel Pie Island Hotel which was a genteel nineteenth-century building that hosted ballroom dancing during the 1920s and 1930s. In 1956 trumpeter Brian Rutland, who ran a local band called The Grove Jazz Band, started jazz sessions at the newly reopened hotel.[1] Sometime afterwards Arthur Chisnall took over the running of the club and continued to promote various jazz bands and then in the 1960s rock and R&B groups.[2][3]

Famous names who performed at the dance hall between 1957 and 1967 include:

In 1967, the hotel was forced to close because the owner could not meet the £200,000 cost of repairs demanded by police.[4] In 1969, the club briefly reopened as Colonel Barefoot's Rock Garden,[5] with bands such as Black Sabbath,[5] The Edgar Broughton Band,[5] Stray, Genesis, and Hawkwind[5] (then known as Hawkwind Zoo) performing there. "I approached the owner Mr. Snapper who lived in Kingston & we agreed a rental deal. I called it Colonel Barefoot's Rock Garden & plastered west london with quad crown posters. I booked in bands Edgar Broughton, Free, Spooky Tooth, Deep Purple, King Crimson, Genesis (support) Wishbone Ash, Mott The Hoople (my best ever attendance), Savoy Brown plus many more. There were two stages: the headliner was on the big stage and the support on the small stage with the light show projectionist above it. We had a bar doing tea, soft drinks, hot dogs and hamburgers. We then did Colonel Barefoot's Killer Punch (cider, cooking brandy and cinnamon) and we gave it away along with beer in half pint plastic disposable cups. I had rows with the fire department as the emergency exits were chained shut to stop people bunking in. Eventually, after a raid by the Fire Chief, I closed down and walked. I was living in Chiswick at this time." – Caldwell Smythe (entrepreneur, pro vocalist, ex Riot Squad & briefly The Honeycombs).

In 1971, the Eel Pie Island Hotel burned down in a mysterious fire.[4][7] The centre of the island was devastated by fire in 1996, and a year later, the footbridge was damaged by a utilities contractor.[7] A new footbridge opened in August 1998.[7]

For his 2005 television show How To Start Your Own Country, presenter Danny Wallace claimed to be "Leader" of Eel Pie Island after "invading" the island via the footbridge. After a few hours, the Metropolitan Police Service forced him to give the island back peacefully to Queen Elizabeth II.[8]

Despite its small size, Eel Pie Island has a wide variety of building styles.

Eel Pie Island was also the setting of a murder mystery, The Eel Pie Murders by David Frome (Zenith Brown), published in 1933.[11] It was part of the Mr. Pinkerton series, featuring amateur sleuth, Evan Pinkerton, a widower Welshman, and his friend, Chief Inspector J. Humphrey Bull of Scotland Yard.

The island was also mentioned in the 2011 novel Rivers of London by Ben Aaronovitch.