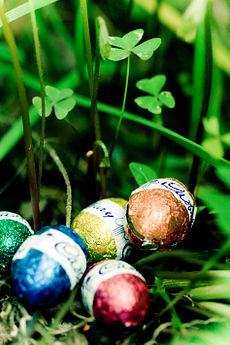 Chocolate Easter eggs hidden as part of an egg hunt

An egg hunt is a game during which decorated eggs, real hard-boiled ones or artificial, filled with or made of chocolate candies, of various sizes, are hidden in various places for children to find. The game may be both indoors and outdoors.

When the hunt is over, prizes may be given out for various achievements, such as the largest number of eggs collected, for the largest or smallest egg, for the most eggs of a specific color, consolation prizes, booby prizes, etc.[1]

Real eggs may further be used in egg tapping contests. If eggs filled with confetti left from Mardi Gras (cascarones) are used, then an egg fight may follow.[1] 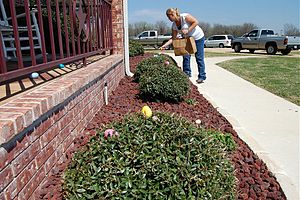 A young woman hides Easter eggs for preschool-aged children to find. She is careful not to make their location and retrieval too difficult.

Eggs are placed with varying degree of concealment, to accommodate children of varying ages. In South German folk traditions it was customary to add extra obstacles to the game by placing them into hard-to reach places among nettles or thorns.[2]

The egg was a symbol of the rebirth of the earth in pre-Christian celebrations of spring. However, the Easter egg itself was defined by early Christians as an Easter symbol of the resurrection of Jesus: the egg symbol was likened to the tomb from which Christ arose.[3]

Lizette Larson-Miller, a professor with the Graduate Theological Union of Berkeley, traces the specific custom of the Easter egg hunt to the Protestant Christian Reformer Martin Luther, stating "We know that Martin Luther had Easter egg hunts where the men hid the eggs for the women and children, and it probably has this connection back to this idea of eggs being the tomb."[4] The Reverend MaryJane Pierce Norton, the Associate General Secretary of Leadership Ministries at the General Board of Discipleship, states that "there’s something about going to hunt the eggs just as we might go to hunt for Jesus in the tomb. And when we find them it’s that joy that the women had when they reached the tomb first and found that Jesus was no longer there."[5] Traditionally the game is associated with Easter and Easter eggs (Easter egg hunt), but it has also been popular with spring time birthday parties.[1]

At least since the 17th century the idea of the Easter Bunny to bring the Easter eggs has been known. The novelty of the introduction of Easter egg hunts into England is evidenced by A. E. Housman's inaugural lecture as Professor of Latin at University College, London in 1892, in which he said, "In Germany at Easter time they hide coloured eggs about the house and garden that the children may amuse themselves in discovering them."[6]

Egg hunts are a subject of the Guinness Book of World Records. For example, Homer, Georgia, United States was listed in 1985 with 80,000 eggs to hunt in a town of 950 people.

There have been a number of companies whom have made use of the popularity of Easter and more specifically Easter egg hunts. Most notable unsurprisingly those better known for their Easter campaigns have been chocolatiers including Cadbury with their annual Easter Egg Trail. Also this year Thorntons has made use of the geocaching community and have placed over 50 hidden Easter Eggs across the United Kingdom. 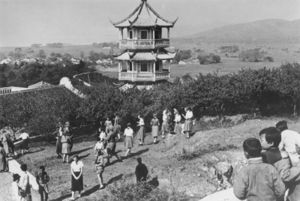