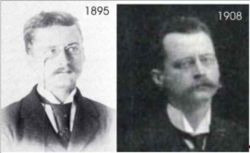 He was born in 1873 as the son of the court and Gerichtsadvokaten Emil von Schweidler born in Vienna. After studying physics and mathematics, he earned his doctorate with a dissertation "On the internal friction of mercury and some Amalgamen" (1895). He was assistant to Franz Exner.

From an historical view, his major works in the field of atmospheric electricity should be mentioned. Schweidler's scientific work was recognized very early (1907) with the award of "Baumgartner Prize" of the Vienna Academy of Sciences for the study of the anomalies in the behavior of dielectrics. He pointed (in 1899) with Stefan Meyer, among others, the statistical nature of the radioactive decay or the magnetic deflection of beta radiation as fast electrons. His predicted variations (1905) of the ionization radiation formed in the end a large number of theoretical and experimental investigations.