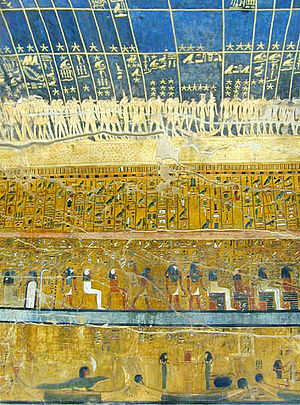 Despite this consensus, disagreements remain within the scholarly community, resulting in variant chronologies diverging by about 300 years for the Early Dynastic Period, up to 30 years in the New Kingdom, and a few years in the Late Period.[1]

Scholarly consensus on the general outline of the conventional chronology current in Egyptology has not fluctuated much over the last 100 years. For the Old Kingdom, consensus fluctuates by as much as a few centuries, but for the Middle and New Kingdoms, it has been stable to within a few decades. This is illustrated by comparing the chronology as given by two Egyptologists, the first writing in 1906, the second in 2000 (all dates in the table are BC).[2]

The disparities between the two sets of dates result from additional discoveries and refined understanding of the still very incomplete source evidence. For example, Breasted adds a ruler in the Twentieth dynasty that further research showed did not exist. Following Manetho, Breasted also believed all the dynasties were sequential, whereas it is now known that several existed at the same time. These revisions have resulted in a lowering of the conventional chronology by up to 400 years at the beginning of Dynasty I. 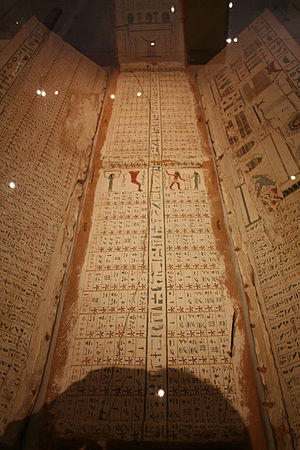 The backbone of Egyptian chronology are the regnal years as recorded in Ancient Egyptian king lists. Surviving king lists are either comprehensive but have significant gaps in their text (for example, the Turin King List), or are textually complete but fail to provide a complete list of rulers (for example, the Abydos King List), even for a short period of Egyptian history. It is further complicated by occasional conflicting information on the same regnal period from different versions of the same text; thus, the Egyptian historian Manetho's history of Egypt is only known by extensive references to it made by subsequent writers, such as Eusebius and Sextus Julius Africanus, and the dates for the same pharaoh often vary substantially depending on the intermediate source.

Regnal periods have to be pieced together from inscriptions, which will often give a date in the form of the regnal year of the ruling pharaoh, which will only ascertain a minimum reign length and may or may not include any coregencies with a predecessor or successor. In addition, some Egyptian dynasties may have overlapped, with different pharaohs ruling in different regions at the same time, rather than serially. Not knowing whether monarchies were simultaneous or sequential may lead to widely differing chronological interpretations.

Where the total number of regnal years for a given ruler is not known, Egyptologists have identified two indicators to provide that total number: for the Old Kingdom, the number of cattle censuses; and for later periods, the celebration of a sed festival. A number of Old Kingdom inscriptions allude to a periodic census of cattle, which experts at first believed took place every second year; thus records of as many as 24 cattle censuses indicate Sneferu had reigned 48 years. However, further research has shown that these censuses were sometimes taken in consecutive years, or after two or more years had passed.[3] The sed festival was usually celebrated on the thirtieth anniversary of the Pharaoh's ascension, thus rulers who recorded recording one could be assumed to have ruled at least 30 years. However, once again, this may not be the usual practice in all case.[4]

In the early days of Egyptology, the compilation of regnal periods may also have been hampered due to biblical bias on the part of the Egyptologists.[who?][citation needed] This was most pervasive before the mid 19th century, when Manetho's figures were recognized as conflicting with biblical chronology based on Old Testament references to Egypt (see Pharaohs in the Bible). In the 20th century, such biblical bias has mostly been confined to alternative chronologies outside of scholarly mainstream.

A useful way to work around these gaps in knowledge is to find chronological synchronisms, which can lead to a precise date. Over the past decades, a number of these have been found, although they are of varying degrees of usefulness and reliability.

A number of suggestions for alternatives to the consensus on the conventional chronology have been presented during the 20th century: