From Infogalactic: the planetary knowledge core
(Redirected from Egyptologist)
Jump to: navigation, search
For the book by Dugald Steer, see Egyptology: Search for the Tomb of Osiris. 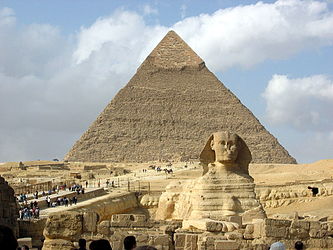 Egyptology (from Egypt and Greek -λογία, -logia. Arabic: علم المصريات‎‎) is the study of ancient Egyptian history, language, literature, religion, architecture and art from the 5th millennium BC until the end of its native religious practices in the 4th century AD. A practitioner of the discipline is an "Egyptologist". In Europe, particularly on the Continent, Egyptology is primarily regarded as being a philological discipline, while in North America it is often regarded as a branch of archaeology.

The first explorers were the ancient Egyptians themselves. Thutmose IV restored the Sphinx and had the dream that inspired his restoration carved on the famous Dream Stele. Less than two centuries later, Prince Khaemweset, fourth son of Ramesses II, is famed for identifying and restoring historic buildings, tombs and temples including the pyramid.[1]

Some of the first historical accounts of Egypt were given by Herodotus, Strabo, Diodorus Siculus and the largely lost work of Manetho, an Egyptian priest, during the reign of Ptolemy I and Ptolemy II in the 3rd century BC. The Ptolemies were much interested in the work of the ancient Egyptians, and many of the Egyptian monuments, including the pyramids, were restored by them (although they built many new temples in the Egyptian style). The Romans too carried out restoration work in this most ancient of lands.

Development of the field

European exploration and travel writings of ancient Egypt commenced from the 13th century onward, with only occasional detours into a more scientific approach, notably by Claude Sicard, Benoît de Maillet, Frederic Louis Norden and Richard Pococke. In the early 17th century, John Greaves measured the pyramids, having inspected the broken Obelisk of Domitian in Rome, then destined for the Earl of Arundel's collection in London.[3] He went on to publish the illustrated Pyramidographia in 1646, while the Jesuit scientist-priest Athanasius Kircher was perhaps the first to hint at the phonetic importance of Egyptian hieroglyphs, demonstrating Coptic as a vestige of early Egyptian, for which he is considered a "founder" of Egyptology.[4] In the late 18th century, with Napoleon's scholars' recording of Egyptian flora, fauna and history (published as Description de l'Egypte), the study of many aspects of ancient Egypt became more scientifically oriented. The British captured Egypt from the French and gained the Rosetta Stone. Modern Egyptology is generally perceived as beginning about 1822. 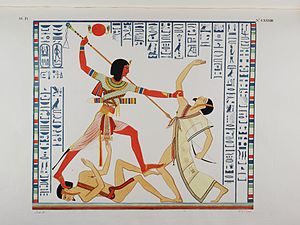 Hieroglyphs and depictions transcribed by Ippolito Rosellini in 1832

Egyptology's modern history begins with the invasion of Egypt by Napoleon Bonaparte. The subsequent publication of Description de l'Égypte between 1809 and 1829 made numerous ancient Egyptian source materials available to Europeans for the first time.[5] Jean-François Champollion, Thomas Young and Ippolito Rosellini were some of the first Egyptologists of wide acclaim. The German Karl Richard Lepsius was an early participant in the investigations of Egypt; mapping, excavating, and recording several sites. Champollion announced his general decipherment of the system of Egyptian hieroglyphics for the first time, employing the Rosetta Stone as his primary aid. The Stone's decipherment was a very important development of Egyptology. With subsequently ever-increasing knowledge of Egyptian writing and language, the study of Ancient Egyptian civilization was able to proceed with greater academic rigour and with all the added impetus that comprehension of the written sources was able to engender. Egyptology became more professional via work of William Matthew Flinders Petrie, among others. Petrie introduced techniques of field preservation, recording, and excavating. Howard Carter's expedition brought much acclaim to the field of Egyptology. Many highly educated amateurs now also travelled to Egypt, however, including women such as Harriet Martineau and Florence Nightingale, who both left philosophical accounts of their travels, which revealed learned familiarity with all the latest European Egyptology.[6]

In the modern era, the Ministry of State for Antiquities[9] controls excavation permits for Egyptologists to conduct their work. The field can now use geophysical methods and other applications of modern sensing techniques to further Egyptology.

Egyptology as an academic discipline 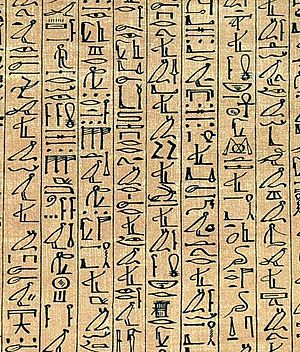 A section of the Papyrus of Ani showing cursive hieroglyphs

Egyptology was established as an academic discipline through the research of Emmanuel de Rougé in France, Samuel Birch in England, and Heinrich Brugsch in Germany. In 1880, Flinders Petrie, another British Egyptologist, revolutionized the field of archaeology through controlled and scientifically recorded excavations. Petrie's work determined that Egyptian culture dated back as early as 4500 BCE. The British Egypt Exploration Fund founded in 1882 and other Egyptologists promoted Petrie's methods. Other scholars worked on producing a hieroglyphic dictionary, developing a Demotic lexicon, and establishing an outline of ancient Egyptian history.[5]

In the United States, the founding of the Oriental Institute at the University of Chicago and the expedition of James Henry Breasted to Egypt and Nubia established Egyptology as a legitimate field of study. In 1924, Breasted also started the Epigraphic Survey with the goal of making and publishing accurate copies of monuments. In the late 19th and early 20th century the Metropolitan Museum of Art; the University of Pennsylvania; the Museum of Fine Arts, Boston; the Brooklyn Institute of Fine Arts; and the Institute of Fine Arts, New York University also conducted excavations in Egypt, expanding American collections.[5]

Societies for Egyptology include:

According to the UCLA the standard text that scholars referenced for studies of Egyptology was for three decades or more, the Lexicon der Ägyptologie. The first volume published in 1975 (containing largely German-language articles, with a few in English and French).[15]

Other related disciplines not mentioned in the article: