The Eighteenth Amendment (Amendment XVIII) of the United States Constitution effectively established the prohibition of alcoholic beverages in the United States by declaring the production, transport, and sale of alcohol (though not the consumption or private possession) illegal. The separate Volstead Act set down methods of enforcing the Eighteenth Amendment, and defined which "intoxicating liquors" were prohibited, and which were excluded from prohibition (e.g., for medical and religious purposes). The Amendment was the first to set a time delay before it would take effect following ratification, and the first to set a time limit for its ratification by the states. Its ratification was certified on January 16, 1919, with the amendment taking effect on January 16, 1920.

For the following 13 years Prohibition was officially in effect, though the ability to enforce it was limited by the Volstead Act and by corrupt and complacent politicians who overlooked illicit manufacturing and smuggling.[1] The amendment was repealed in 1933 by ratification of the Twenty-first Amendment, the only instance in United States history that a constitutional amendment was repealed in its entirety.

Section 1. After one year from the ratification of this article the manufacture, sale, or transportation of intoxicating liquors within, the importation thereof into, or the exportation thereof from the United States and all the territory subject to the jurisdiction thereof for beverage purposes is hereby prohibited.

Section 2. The Congress and the several States shall have concurrent power to enforce this article by appropriate legislation.

Section 3. This article shall be inoperative unless it shall have been ratified as an amendment to the Constitution by the legislatures of the several States, as provided in the Constitution, within seven years from the date of the submission hereof to the States by the Congress.

The Eighteenth Amendment was the result of decades of effort by the temperance movement in the United States and at the time was generally considered a progressive amendment.[2]

Many state legislatures had already enacted statewide prohibition prior to the ratification of the Eighteenth Amendment, but did not ban consumption of alcohol in most households. 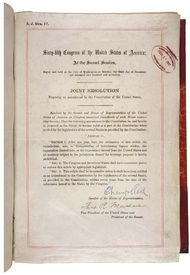 Amendment XVIII in the National Archives

On August 1, 1917, the Senate passed a resolution containing the language of the amendment to be presented to the states for ratification. The vote was 65 to 20, with the Democrats voting 36 in favor and 12 in opposition; and the Republicans voting 29 in favor and 8 in opposition. The House of Representatives passed a revised resolution[3] on December 17, 1917.

The amendment and its enabling legislation did not ban the consumption of alcohol, but made it difficult to obtain alcoholic beverages legally, as it prohibited the sale and distribution of them in U.S. territory.

The proposed amendment was the first to contain a provision setting a deadline for its ratification. That clause of the amendment was challenged, with the case reaching the US Supreme Court. It upheld the constitutionality of such a deadline in Dillon v. Gloss (1921).

The ratification of the Amendment was completed on January 16, 1919, when Nebraska became the 36th of the 48 states then in the Union to ratify it. On January 29, acting Secretary of State Frank L. Polk certified the ratification.[6]

The following states ratified the amendment:[7]

The following states rejected the amendment:

To define the language used in the Amendment, Congress enacted enabling legislation called the National Prohibition Act, better known as the Volstead Act, on October 28, 1919. President Woodrow Wilson vetoed that bill, but the House of Representatives immediately voted to override the veto and the Senate voted similarly the next day. The Volstead Act set the starting date for nationwide prohibition for January 17, 1920, which was the earliest date allowed by the 18th Amendment.[4]

After the Eighteenth Amendment's adoption, there was a significant reduction in alcohol consumption among the general public and particularly among low-income groups.[11] Likewise, there was a general reduction in overall crime, mainly in the types of crimes associated with the effects of alcohol consumption, though there were significant increases in crimes involved in the production and distribution of illegal alcohol to supply the segment of the population that refused to quit alcohol. Those who continued to use alcohol tended to turn to organized criminal syndicates, who were able to take advantage of weak enforcement, understaffed police forces, and corrupt public officials to establish powerful smuggling networks. Anti-prohibition groups arose once it became apparent that Prohibition was a catastrophe.

The Twenty-first Amendment repealed the Eighteenth Amendment on December 5, 1933. The amendment remains the only constitutional amendment to be repealed in its entirety; leaving only the power to regulate transportation solely to the federal government.[12]