Eisenacher Motorenwerk (EMW) was an East German manufacturer of automobiles and motorcycles based in Eisenach. EMW also entered Formula One as a constructor in 1953, but participated in only one race, the 1953 German Grand Prix. The car retired after 12 laps with exhaust problems.[1]

One of the pre-World War II BMW factories was located in Eisenach, which after the war was taken over by the Soviets, since Eisenach was situated in the Soviet occupation zone. The factory continued producing cars and motorcycles under the BMW brand, but after a lawsuit in 1952 they had to change the name to EMW instead. The logotype was also similar, but instead of the blue BMW used, EMW used red.

Later the automobile section of EMW became VEB Automobilwerk Eisenach and built the Wartburg. Motorcycle manufacture ended in the 1950s and was replaced by the AWO 425 built by Simson at Suhl. 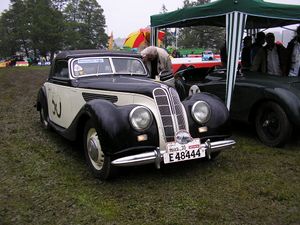 An EMW. Note the BMW-like grille.

* Constructors' Championship not awarded until 1958.