From Infogalactic: the planetary knowledge core
Jump to: navigation, search
Not to be confused with the New Executive Office Building.

The Eisenhower Executive Office Building (EEOB) — formerly known as the Old Executive Office Building (OEOB) and even earlier as the State, War, and Navy Building — is a U.S. government building situated just west of the White House in the U.S. capital of Washington, D.C. Maintained by the General Services Administration, it is occupied by the Executive Office of the President, including the Office of the Vice President of the United States. Located on 17th Street NW, between Pennsylvania Avenue and New York Avenue, and West Executive Drive, the building, commissioned by Ulysses S. Grant, built between 1871 and 1888, on the site of the original 1800 War/State/Navy Building and the White House stables, in the French Second Empire style, is a National Historic Landmark. It was for years the world's largest office building, with 566 rooms and about ten acres of floor space. Many White House employees have their offices in the massive edifice. 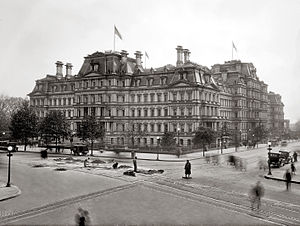 The building—originally called the State, War, and Navy Building because it housed the Departments of State, War, and the Navy—was built between 1871 and 1888 in the French Second Empire style.[3] It was designed by Alfred B. Mullett, Supervising Architect. Patterned after French Second Empire architecture that clashed sharply with the neoclassical style of the other Federal buildings in the city, it was generally regarded with scorn and disdain, and the architect of the exterior, Alfred B. Mullett, ended his life in litigation and suicide. The OEOB was referred to by Mark Twain as "the ugliest building in America."[4] Harry Truman called it "the greatest monstrosity in America."[5] Historian Henry Adams called it Mullet's “architectural infant asylum.”[6]

Much of the interior was designed by Richard von Ezdorf using fireproof cast-iron structural and decorative elements, including massive skylights above each of the major stairwells and doorknobs with cast patterns indicating which of the original three occupying departments (State, Navy, or War) occupied a particular space. The total cost to construct the building came in at $10,038,482.42 when constructed ended in 1888, after 17 years. The original tenants of the building quickly outgrew it and finally vacated it completely in the late 1930s. The building gradually came to be seen as inefficient and was nearly demolished in 1957. In 1969, the building received the highest recognition possible, becoming a National Historic Landmark. In 1981, plans began to restore all the "secretary of" suites. The main office of the Secretary of the Navy was restored in 1987 and is now used as the ceremonial office of the Vice President of the United States. Shortly after 11 September 2001, the 17th Street side of the building was vacated and has since been modernized. The building continues to house various agencies that compose the President's Executive Office, such as the Office of the Vice President, the Office of Management and Budget, and the National Security Council. However, its most public purpose is that of the Vice President's Ceremonial Office, which is mainly used for special meetings and press conferences.[7]

Many celebrated national figures have participated in historical events that have taken place within the Old Executive Office Building. Theodore Roosevelt, William Howard Taft, Franklin D. Roosevelt, Dwight D. Eisenhower, Lyndon B. Johnson, Gerald Ford, and George H. W. Bush all had offices in this building before becoming President. It has housed 16 Secretaries of the Navy, 21 Secretaries of War, and 24 Secretaries of State. Sir Winston Churchill once walked its corridors and Japanese emissaries met there with Secretary of State Cordell Hull after the bombing of Pearl Harbor. President Herbert Hoover occupied the Secretary of the Navy's office for a few months following a fire in the Oval Office on Christmas Eve 1929. Dwight D. Eisenhower held the first televised Presidential news conference in the building's Indian Treaty Room (room 474) on January 19, 1955.[8] In recent history, Richard Nixon had a private office there during his presidency, where his secret taping system recorded some of the conversations that proved the Watergate scandal. Vice President Lyndon B. Johnson was the first in a succession of Vice Presidents who have had offices in the building.[7] The first wife of a Vice President to have an office in the building was Marilyn Quayle, wife of James Danforth Quayle. He served as the Vice President to George H.W. Bush. In keeping up with the times, the building unveiled the White House website in 1994.

A small fire on December 19, 2007 damaged an office of the vice-president's staff and included the VP ceremonial office.[10][11] According to media reporting, the office of the Vice President's Political Director, Amy Whitelaw, was heavily damaged in the fire.[12] 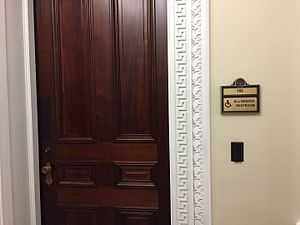 In 2015 the Obama administration announced it had opened a gender-neutral bathroom in the building.[13]