An eisteddfod (Welsh: [ə(i)ˈstɛðvɔd]; plural eisteddfodau [ə(i)stɛðˈvɔdaɨ]) is a Welsh festival of literature, music and performance. The tradition of such a meeting of Welsh artists dates back to at least the 12th century, when a festival of poetry and music was held by Rhys ap Gruffydd of Deheubarth at his court in Cardigan in 1176 but, with the decline of the bardic tradition, it fell into abeyance. The present-day format owes much to an eighteenth-century revival arising out of a number of informal eisteddfodau. The closest English equivalent to eisteddfod is "session"; the word is formed from two Welsh morphemes: eistedd, meaning "sit", and bod, meaning "be".[1]

The date of the first eisteddfod is a matter of much debate among scholars, but boards for the judging of poetry definitely existed in Wales from at least as early as the twelfth century, and it is likely that the ancient Celtic bards had formalized ways of judging poetry as well. The first eisteddfod can be traced back to 1176, under the auspices of Lord Rhys, at his castle in Cardigan. There he held a grand gathering to which were invited poets and musicians from all over the country. A chair at the Lord's table was awarded to the best poet and musician, a tradition that prevails in the modern day National Eisteddfod. The earliest large-scale eisteddfod that can be proven beyond all doubt to have taken place, however, was the Carmarthen Eisteddfod, which took place in 1451. The next recorded large-scale eisteddfod was held in Caerwys in 1568. The prizes awarded were a miniature silver chair to the successful poet, a little silver crwth to the winning fiddler, a silver tongue to the best singer, and a tiny silver harp to the best harpist. Originally, the contests were limited to professional Welsh bards who were paid by the nobility. To ensure the highest standard possible, Elizabeth I of England commanded that the bards be examined and licensed. As interest in the Welsh arts declined, the standard of the main eisteddfod deteriorated as well and they became more informal. In 1789, Thomas Jones organised an eisteddfod in Corwen, where for the first time the public were admitted. The success of this event led to a revival of interest in Welsh literature and music.

Iolo Morganwg (bardic name of Edward Williams) founded "Gorsedd Beirdd Ynys Prydain" (Gorsedd of the Bards of the Isle of Britain) in 1792 to restore and replace the ancient eisteddfod. The first eisteddfod of the revival was held in Primrose Hill, London.

The Gentleman's Magazine of October 1792 reported on the revival of the eisteddfod tradition.

This being the day on which the autumnal equinox occurred, some Welsh bards resident in London assembled in congress on Primrose Hill, according to ancient usage. Present at the meeting was Edward Jones who had published his "The Musical and Poetical Reelicks of the Welsh Bards" in 1784 in a belated effort to try to preserve the native Welsh traditions being so ruthlessly stamped out by the new breed of Methodists.

The Blue Books' notorious attack on the character of the Welsh as a nation in 1846 led to public anger and the belief that it was important for the Welsh to create a new national image. By the 1850s people began to talk of a national eisteddfod to showcase Wales's culture. In 1858 John Williams ab Ithel held a "National" Eisteddfod complete with Gorsedd in Llangollen. "The great Llangollen Eisteddfod of 1858" was a significant event. Thomas Stephens won a prize with an essay demolishing the claim of John Williams (the events organiser) that Madoc discovered America. As Williams had expected Stephens's essay to reinforce the myth, he was not willing to award the prize to Stephens and, it is recorded, "matters became turbulent". This eisteddfod also saw the first public appearance of John Ceiriog Hughes who won a prize for a love poem, Myfanwy Fychan of Dinas Brân, which became an instant hit. There is speculation that this was a result of its depiction of a "deserving, beautiful, moral, well-mannered Welshwoman", in stark contrast to The Blue Books' depiction of Welsh women as having questionable morals. 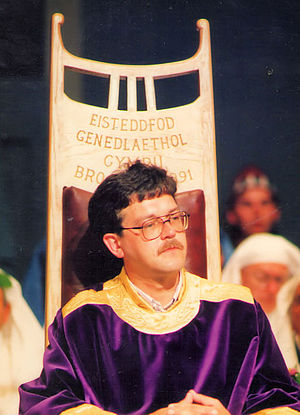 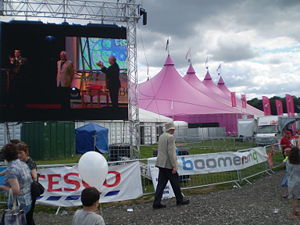 The National Eisteddfod of Wales, Mold 2007

The most important eisteddfod is the National Eisteddfod of Wales, the largest festival of competitive music and poetry in Europe. Its eight days of competitions and performances, entirely in the Welsh language, are staged annually in the first week of August, usually alternating between north and south Wales. (See the main National Eisteddfod of Wales article for a full list of past and future venues.) Competitors typically number 6,000 or more, and overall attendances generally exceed 150,000 visitors.

Another important eisteddfod in the calendar is 'Eisteddfod Yr Urdd', or the Youth Eisteddfod. Organised by Urdd Gobaith Cymru, it involves Welsh youth aged 7 to 24 in a week of competition in singing, recitation, dancing, acting and musicianship during the summer half-term school holiday. The event is claimed to be Europe's premier youth arts festival.[2] Regional heats are held in advance and, as with the National Eisteddfod, the Urdd Eisteddfod is held in a different location each year. With the establishment of the Urdd headquarters in the Wales Millennium Centre, the eisteddfod will return to Cardiff every four years.

The International Eisteddfod is held annually in Llangollen, Denbighshire each year in July. Choirs, singing groups, folk dancers and other groups attend from all over the world, sharing their national folk traditions in one of the world's great festivals of the arts. It was set up in 1947 and begins with a message of peace. In 2004, it was (unsuccessfully) nominated for the Nobel Peace Prize by Terry Waite, who has been actively involved with the eisteddfod.

Smaller-scale local eisteddfodau are held throughout Wales. One of the best known is the Maes Garmon Eisteddfod (Welsh: Eisteddfod Ysgol Maes Garmon, Wyddgrug). Schools hold eisteddfodau as competitions within the school: a popular time for this is on Saint David's Day.

Eisteddfodau in the United States

The 2011 West Coast Eisteddfod: Welsh Festival of Arts in Los Angeles was sponsored by the Meriwether Lewis Memorial Eisteddfod Foundation in association with AmeriCymru, Welsh American social network, and A Raven Above Press, Welsh-American owned and operated small press. The Barnsdall Art Park was chosen as the site for the festival is it was made famous for its architecture of Welsh-American Frank Lloyd Wright and its adjacent location to Griffith Park, known for its founder Griffith J. Griffith a Welsh-American philanthropist.[3] The festival consists of lectures and book readings by authors, film festival, music, art competitions, and outdoor marketplace. AmeriCymru originally founded the festival in 2009 in Portland, Oregon, with the name Left Coast Eisteddfod.[4]

Eisteddfods (Australian plural) have also been adopted into Australian culture. Much like the Welsh original, eisteddfods are competitions that involve testing individuals for singing, dancing, acting and musicianship. The Royal South Street Eisteddfod in Ballarat has been running since 1891.[10] At least 20 years earlier, as described in the diaries of Joseph Jenkins, Ballarat's Welsh community was conducting an annual eisteddfod each St David's Day (1 March). The Sydney Eisteddfod commenced in 1933 and offers some 400 events across all Performing Arts, catering to 30,000 performers annually. Modern equivalents in Australia are competitions reserved for schoolchildren, though many have open sections where anyone (including professionals) may participate and compete. Typically, a prize may be a scholarship to pursue a further career. Many young Australian actors and dancers participate regularly in the various competitions scheduled throughout the year. Many other communities host smaller eisteddfods, including Alice Springs, Darwin and Melbourne. 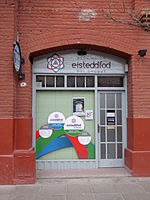 Eisteddfodau have been held since the initial Welsh settlement in Argentina in the late nineteenth century. Competitions nowadays are bilingual, in Welsh and Spanish, and include poetry and prose, translations (Welsh, Spanish, English, Italian, and French), musical performances, arts, folk dances, photography and video among others. There is an annual youth eisteddfod held in Gaiman in September, and the main Chubut Eisteddfod is held in Trelew in October. An annual eisteddfod is also held in Trevelin, in the Andes and Puerto Madryn[citation needed] on the coast.[11]

There are cultural youth events in the Methodist Church in different parts of England called eisteddfods, for example an annual eisteddfod in Kettering in Northamptonshire.

In Cornwall, an analogous event is known as "Esethvos Kernow" (Cornish for "Eisteddfod of Cornwall") and is connected with Gorseth Kernow.

For many years Teignmouth Grammar School in Teignmouth, Devon held an Eisteddfod annually in the Easter term comprising art, music and drama competitions.

The eisteddfod idea has been taken up by non-Welsh speakers in the Channel Islands, particularly for the preservation of Jèrriais and Guernésiais, and is called such. See Jersey Eisteddfod.

In Ireland, Seachtain na Gaeilge is a similar event to Eisteddfod, which celebrates Irish music, culture and promotes the use of the Irish language.

The Scottish Gaelic Mod and the Breton Kan ar Bobl both have similarities to an eisteddfod.

An "International Eisteddfod" was held on 28 July 1915, in San Francisco, California, at the Panama-Pacific International Exposition which drew competing choruses from around the nation, including one mixed group composed of the German members of the Metropolitan Opera Chorus from New York. The tightly-rehearsed all-male Orpheus Club of Los Angeles was judged the winner and awarded $3,000.[12]

In 1926, the Pasadena Playhouse in California, USA, undertook an Eisteddfod of one-act plays by local authors presented to the public, offering a prize for the best. This subsequently evolved into an annual Summer One-Act Play Festival.

The Bristol Festival of Music, Speech and Drama was formerly known as the Bristol Eisteddfod,[13] with the name still being used by the Bristol Dance Eisteddfod.[14]