el jām; Latin Thysdrus) is a town in Mahdia Governorate, Tunisia, population 48,611 (2014 census). It is home to some of the most impressive Roman remains in Africa, like the worldwide famous "Roman amphitheater of Thysdrus". 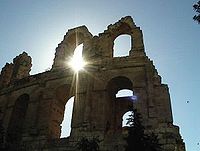 El Djem in the morning

The Roman city of Thysdrus was built, like almost all Roman settlements in ancient Tunisia, on former Punic settlements. In a less arid climate than today's, Thysdrus, which became part of the Roman province of Byzacena, prospered especially in the 2nd century, when it became an important center of olive oil manufacturing for export. It was the seat of a Christian bishopric, which is included in the Catholic Church's list of titular sees.[1]

By the early 3rd century AD, when the amphitheater was built, Thysdrus rivaled Hadrumetum (modern Sousse) as the second city of Roman North Africa, after Carthage. However, following the abortive revolt that began there in 238 AD, and Gordian I's suicide in his villa near Carthage, Roman troops loyal to the Emperor Maximinus Thrax destroyed the city. 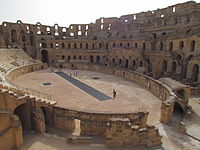 El Djem is famous for its amphitheater, often incorrectly called a Colosseum (roughly translated from Latin as 'that thing by the Colossus'), which is capable of seating 35,000 spectators. Only the Flavian Amphitheater in Rome (about 50,000 spectators) and the ruined theatre of Capua are larger.

The amphitheatre at El Djem was built by the Romans under proconsul Gordian, who was acclaimed Emperor at Thysdrus, around 238 and was mainly used for gladiator shows and small chariot races (like in Ben-Hur).

Many tourists come here to see what it was like to be inside what was once a place where lions and people met their fate. Much of it is crumbled but the essence of it still remains. It is also possible that construction of the amphitheatre was never finished.

Until the 17th century it remained more or less whole. From then on its stones were used for building the nearby village of El Djem and transported to the Great Mosque in Kairouan, and at a tense moment during struggles with the Ottomans, the Turks used cannons to flush rebels out of the amphitheatre.

The ruins of the amphitheatre were declared a World Heritage Site in 1979. It hosts the annual Festival international de musique symphonique d'El Jem.

Drifting sand is preserving the market city of Thysdrus and the refined suburban villas that once surrounded it. The amphiteatre occupies archaeologists' attention: no digging required. Some floor mosaics have been found and published, but field archaeology has scarcely been attempted. Recently with aerophotos has been discovered a huge racetrack stadium.

In the world of writing materials, Thysdrus lay in the Empire of Papyrus, which preserves remarkably well if kept as dry as at El Djem.

During World War II a major military airfield was located near El Djem, used first by the German Luftwaffe. It was attacked on numerous occasions and later used by the United States Army Air Forces Twelfth Air Force as a transport field. There are few, if any, remains of the airfield today with the land being returned to agricultural uses outside of the city.

Today the city of El Djem has nearly 18,000 inhabitants and receives a huge amount of tourists because of the Roman amphiteater.