El Hierro, nicknamed Isla del Meridiano (the "Meridian Island"), is the smallest and farthest south and west of the Canary Islands (an Autonomous Community of Spain), in the Atlantic Ocean off the coast of Africa, with a population of 10,162 (2003). Its capital is Valverde.

The name El Hierro, although spelled like the Spanish word for 'iron', is not related to that word. The H in the name of the metal is derived from the F of Latin ferrum (compare higa for 'fig'). The H in the name of the island dates back to the time in Old Spanish orthography when the distinction between the letters I and J was not yet established and a silent h was written before word-initial ie to ensure that the i was read as a semivowel, not as the consonant [ʒ].

The confusion with the name of the metal had effects on the international naming of the island. As early as the 16th century, maps and texts called the island after the word for 'iron' in other languages: Portuguese Ferro, French l'île de Fer,[2] and Latin Insula Ferri.

Nevertheless, the origin of the name ero or erro or yerro is not definitely known. It is thought to be derived from one of several words in the Guanche language of the pre-Hispanic inhabitants, known as Bimbaches. Juan de Abreu Galindo (in a manuscript translated and published by George Glas in 1764) gives the native name of the island as Esero (or Eseró), meaning 'strong'. [3] Richard Henry Major, however, in notes on his translation of Le Canarien, observes that the Guanche word hero or herro, meaning 'cistern', could easily have lapsed into hierro by a process of folk etymology.[4] It is believed that the Bimbaches had to construct cisterns to save fresh rainwater. The Gran diccionario guanche[5] gives the meaning of the Guanche word hero in Spanish as "fuente" ('spring [water source]').

The ancient natives of the island, called Bimbaches, were subjected to Spanish rule by Jean de Béthencourt – more by the process of negotiation than by military action. Béthencourt had as his ally and negotiator Augeron, brother of the island's native monarch. Augeron had been captured years before by the Europeans and now served as mediator between the Europeans and the Guanches. In return for control over the island, Béthencourt promised to respect the liberty of the natives, but his son eventually broke his promise, selling many of the bimbaches into slavery. Many Frenchmen and Galicians subsequently settled on the island. There was a revolt of the natives against the harsh treatment of the governor Lázaro Vizcaíno, but it was suppressed.

There is evidence of at least three major landslides that have affected El Hierro in the last few hundred thousand years.[6] The most recent of these was the 'El Golfo' landslide that occurred about 15 thousand years ago, involving collapse of the northern flank of the island. The landslide formed the El Golfo valley and created a debris avalanche with a volume of 150–180 km3. Turbidite deposits related to this landslide have been recognized in drill cores from the Agadir Basin to the north of the Canary Islands.[7] Detailed analysis of these deposits suggests that the slope failure did not occur as a single event but a series of smaller failures over a period of hours or days. Local tsunami are likely to have been triggered by these landslides but no evidence has been found to confirm this.[6] 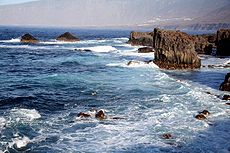 The Instituto Vulcanológico de Canarias (Volcanological Institute of the Canary Islands) and National Geographic Institute’s seismic monitoring station located in Valverde detected increased seismic activity beginning on 17 July 2011.[8] The seismic monitoring network was increased in density on July 21 to allow better detection and location of the seismic events.[8] There was an earthquake swarm with in excess of 400 minor tremors between 20 July and 24 July;[8] by 27 July a further 320 earthquakes had been recorded.[9] On 25 August there were reports that some horizontal deformation had been detected, but that there was no unusual vertical deformation.[10] At that time, the total number of tremors had exceeded 4000.[10] By the end of September, the tremors had increased in frequency and intensity, with experts fearing landslides affecting the town of La Frontera, and also a small possibility of a volcanic eruption through a new vent. Emergency services evacuated several families in the areas at most risk, and made plans to evacuate the island if necessary.[11] Between 4.15 and 4.20am on 10 October 2011 the earthquake swarm changed behaviour and produced a harmonic tremor.[12] Harmonic tremors are produced by magma movements and can indicate that an eruption has begun. A small submarine eruption began, 7 km south of La Restinga.[13] As of 7 November 2011 a confirmed surtseyan type of eruption phase has started at the fissure. On December 4, 2011 the eruption was ongoing with vigorous phreatic bubbles emerging.[14] 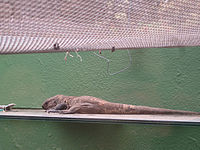 El Hierro is home to many unique species, such as the critically endangered El Hierro giant lizard (Gallotia simonyi), for which there is a captive breeding programme, allowing its reintroduction.[15]

The climate of El Hierro depends on the area. The climate ranges are from humid subtropical climate in the center of the island, to hot semi-arid (BSh) and to desert climate (BWh) in coastal parts (according to the Köppen climate classification). Although the temperatures are very influenced by the ocean. This is the climate chart from El Hierro Airport, which is the only airport in the island and also the island's capital airport:

In 2000, El Hierro was designated by UNESCO as a Biosphere Reserve, with 60% of its territory protected to preserve its natural and cultural diversity.[15]

Like the rest of the Canary Islands chain, El Hierro is sharply mountainous and volcanic, only one eruption has ever been recorded on the island from the Volcan de Lomo Negro vent in 1793. The eruption lasted a month.

El Hierro is a 268.71 km2[1] island, formed approx 1.2 million year ago[18] after three successive eruptions, the island emerged from the ocean as a triangle of basaltic dykes topped with a volcanic cone more than 2,000 metres high.[19] With continued activity resulting in the island expanding to have the largest number of volcanoes in the Canaries (over 500 cones, another 300 covered by more recent deposits), together with approximately 70 caves and volcanic galleries, including the Cueva de Don Justo whose collection of channels is over 6 km in length.[19] Landslides have reduced the size and height of the island.[19] The current highest point is situated in the middle of the island, in Malpaso, 1501 meters high.

Like all of the Canary Islands, El Hierro is a tourist destination. It is served by a small airport—El Hierro Airport at Valverde—and a ferry terminal, both of which connect to Tenerife. Though El Hierro has a Parador, hotel accommodations are generally in small family enterprises; as a UNESCO World Biosphere Reserve, El Hierro has limited construction to less than half of its total surface and buildings to two floors, maintaining its traditional look and social structure more than the other six major Canary Islands.

The island is part of the province of Santa Cruz de Tenerife, and includes three municipalities:

Valverde is situated in the northeast and Frontera in the west, both contain several villages.

The seat of the island government (cabildo insular) is in the town of Valverde, which houses approximately half of the island's population.

El Hierro was known in European history as the prime meridian in common use outside of the future British Empire. Already in the 2nd century A.D., Ptolemy considered a definition of the zero meridian based on the western-most position of the known world, giving maps with only positive (eastern) longitudes. In the year 1634, France ruled by Louis XIII and Richelieu decided that Ferro's meridian should be used as the reference on maps, since this island was considered the most western position of the Old World. (Flores Island lies further west, but the Azores were not discovered by Europeans until the early 15th century, and their identification as part of the Old World is uncertain.) It was thought to be exactly 20 degrees west of the Paris meridian, so indeed the exact position of Ferro was never considered. Old maps (outside of Anglo-America) often have a common grid with Paris degrees at the top and Ferro degrees offset by 20 at the bottom. Louis Feuillée also worked on this problem in 1724.

The most important festival of El Hierro is the Bajada de la Virgen de los Reyes, held every four years, on the first Saturday of July (the last occasion was in 2013, and the next will be in 2017). During the festival, the Virgin of the Kings (Virgen de los Reyes, patron saint of the island of El Hierro) is taken from her sanctuary in La Dehesa (in the municipality of La Frontera) and carried to the capital of the island, Valverde, making a tour of 44 kilometers and running through all the towns of El Hierro.

The annual festival of the Virgin is celebrated every September 24.

File:Wind turbine 2.5mw on el hierro island.jpg
Assembly of the first of five wind turbines with 2.5 MW each, which are the island’s only electricity supply.

According to the Ministry for Industry, Tourism and Commerce, El Hierro will become the first island in the world to be self-sufficient for electrical energy. This will be achieved through a €54 million project combining a greater than 11 megawatt wind farm and two hydroelectric projects.[20][21][22][23]

This hydro- and wind-power project, created by the local Gorona del Viento El Hierro consortium with financial aid from the European Union, and officially inaugurated in 2015, consists of five wind turbines of type E-70 capable of producing 11.5 megawatts of wind power to supply electricity for approximately 11,000 residents, an additional number of tourists, and three water desalination facilities. The hybrid wind/pumped hydro storage system stores surplus wind power by pumping water up 700 meters (approximately 2,300 feet) to fill the crater of an extinct volcano. When winds are calm or when demand exceeds supply, water is released from the crater to generate 11.3 MW of electricity, filling an artificial basin created at the bottom of the extinct volcano. Water in the lower basin is then pumped back up again to the upper reservoir when there is excess wind power.[23]

The closed-loop hybrid wind/hydro system is expected to save approximately US$4M per year (calculated with January 2011 oil prices) previously spent on about 40,000 barrels of crude oil imported annually, and makes the island completely self-sufficient for electrical energy.[23] [24]

The Bimbache openART Festival and Global Initiative for Arts and Sustainability, founded in 2005 by German-born guitarist Torsten de Winkel and other community activists, is a non-profit effort at creating an interdisciplinary platform which seeks to bridge traditional divides, both on a musical and human level, in a globalizing world. The festival is a contribution of the international artist community to El Hierro's "Sustainable Island" program and collaborates with scientists and sustainability-oriented organizations from around the world.

The island of Hierro is mentioned in Umberto Eco's novel The Island of the Day Before (L'isola del giorno prima, 1994), a novel about a 17th-century Italian nobleman trapped on an island on the International Date Line; and in Christopher Isherwood's short story "The Turn Round the World", collected in his Exhumations (1966).