Elbeuf is a commune in the Seine-Maritime department in the Haute-Normandie region in northern France.

A light industrial town situated by the banks of the Seine some 11 miles (18 km) south of Rouen at the junction of the D7, D321 and the D313 roads. The commune’s territory is largely residential to the north but the southern section is covered by thick woodland. Its position by a meander of the Seine leaves the town susceptible to flooding.

The first written record of the town was in the 10th century, on a map of Richard I of Normandy, under the name "Wellebou". According to the Nuttall Encyclopedia of 1907, it had a flourishing manufacturing business in cloth, woollens, and similar items. 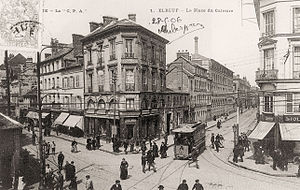 Place du Calvaire and the Tramway around 1900 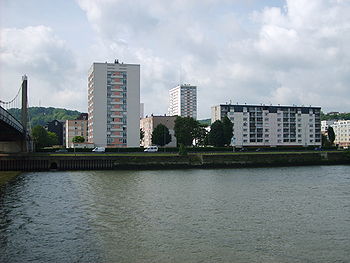