Eleanor Elkins Widener, née Eleanore Elkins[upper-alpha 1] (later known as Eleanor Elkins Widener Rice or Mrs. Alexander Hamilton Rice; c.1862 – July 13, 1937) was an American heiress, socialite, philanthro­pist, and adventuress best remembered for her donation to Harvard University of the Widener Library—​​a memorial to her elder son Harry Elkins Widener, who (along with her first husband, George Dunton Widener) perished in the sinking of the RMS Titanic.

Widener later married Harvard professor Alexander Hamilton Rice, Jr., a surgeon and explorer. She subse­quently accompa­nied Rice on a number of expeditions, including one on which she "went further up the Amazon than any white woman had pene­trated" and, purportedly, he was attacked by cannibals.

Widener was the daughter of Philadelphia streetcar magnate William Lukens Elkins. In 1883 she married George Dunton Widener, son of her father's business partner, thereby "[uniting] two of the largest fortunes in the city. She was known as one of the city's most beautiful women."‍[4] 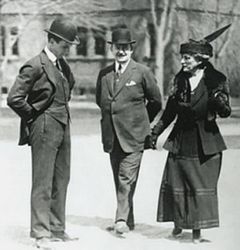 In 1912 Widener and her husband traveled to Paris, with their elder son Harry, in search of a chef for their new hotel, Philadelphia's Ritz Carlton. On April 12 they embarked at Cherbourg on the RMS Titanic for their return to America. George, Harry, and their valet all perished in the Titanic's sinking;[2] but Widener, with her maid, "survived the Titanic by manning the oars in a lifeboat."‍[4][upper-alpha 2]

Soon after, Widener donated, at a cost of some $3.5 million, the Harry Elkins Widener Memorial Library to Harvard University.[8]:14 (Harry Widener, who was "intensely interested in the collection of rare and valuable books", had graduated from Harvard College in 1907.)‍[9] She also[when?] rebuilt St. Paul's Protestant Episcopal Church in Philadelphia's Ogontz neighborhood as a memorial to George Widener, and gave a $300,000 science building to Pottstown, Pennsyl­vania's Hill School, from which Harry Widener had graduated in 1903.[4]

At the library's June 1915 dedication, Widener met[11] Harvard professor Alexander Hamilton Rice, Jr., a surgeon and noted South American explorer,[12] a "certified Boston Brahmin"‍[12] who "knew headwaters the way other society folk knew headwaiters."‍[13]:29 In October she married Rice while wearing her "celebrated [$750,000] string of pearls which she saved from the Titanic disaster".[upper-alpha 3] (Another string, worth $250,000, had been lost.[14] One headline read: "Explorer Weds Titanic Widow".)‍[8]:20 She gave up her Philadelphia home, dividing her time among Newport, New York, and Paris when not accompa­ny­ing Rice in his explorations.[citation needed]

On one such foray Widener became "the first white woman to enter the Rio Negro country [where she] caused a great sensation among the natives. She was kindly treated and was looked upon with reverence. Natives showered her with gifts, and she made many friends with the women of the tribes by her gifts of beads, knives and other trinkets."‍[15][upper-alpha 4]

A 1920 trip on which Widener "went further up the Amazon than any white woman had penetrated" went less smoothly. "The party warded off an attack by savages and killed two cannibals"‍[4]—​​​"scantily clad ... very ferocious and of large stature"‍[16]—​​though "as luck would have it, [Widener had] remained on the specially constructed yacht" during this phase of the explorations.[15] That particular trip "was abandoned on the advice of Indian guides, but the Rices ventured several more times into the jungles."‍[4] (A subsequent headline read: "Explorer Rice Denies That He Was Eaten By Cannibals".‍)[12]