Eleanor Florence Rathbone (12 May 1872 – 2 January 1946) was an independent British Member of Parliament (MP) and long-term campaigner for women's rights. She was a member of the noted Rathbone family of Liverpool.

Rathbone was the daughter of the social reformer William Rathbone VI and his second wife, Emily Lyle. Her family encouraged her to concentrate on social issues. Rathbone went to Kensington High School (now Kensington Prep School), London; and later went to Somerville College, Oxford, over the protests of her mother, and supported by Classics coaching from Lucy Mary Silcox.[1]

After graduation, Rathbone worked alongside her father to investigate social and industrial conditions in Liverpool, until he died in 1902. They also opposed the Second Boer War. In 1903 Rathbone published their Report on the results of a Special Inquiry into the conditions of Labour at the Liverpool Docks. In 1905 she assisted in establishing the School of Social Science at the University of Liverpool, where she lectured in public administration. Her connection with the university is still recognised by the Eleanor Rathbone building, lecture theatre and Chair of Sociology.

Rathbone was elected as an independent member of Liverpool City Council in 1909 for the seat of Granby Ward, a position she maintained until 1934. The same year she published her first book How the Casual Labourer Lives. She also wrote a series of articles to a suffragist magazine The Common Cause. In 1913 with Nessie Stewart-Brown she co-founded the Liverpool Women Citizen's Association to promote women's involvement in political affairs. At the outbreak of the World War I, Rathbone organised the Town Hall Soldiers' and Sailors' Families Organisation to support wives and dependants of soldiers. Rathbone formed the "1918 Club" in Liverpool (still meeting at the Adelphi Hotel), reputedly the oldest women's forum still meeting.

From 1918 onwards, Rathbone was arguing for a system of family allowances paid directly to mothers. She also opposed violent repression of rebellion in Ireland. She was instrumental in negotiating the terms of women's inclusion in the 1918 Representation of the People Act.

In 1919, when Millicent Fawcett retired, Rathbone took over the presidency of the National Union of Societies for Equal Citizenship (the renamed National Union of Women's Suffrage Societies), and as such was responsible for the creation of the Liverpool Personal Service Society. She became the first chair of PSS. She also campaigned for women's rights in India.

In 1922 she contested the General Election as an Independent candidate at Liverpool East Toxteth against the sitting Unionist MP and was defeated.[2]

In 1924 in the Disinherited Family, she argued that economic dependence of women was based on the practice of supporting variably-sized families with wages that were paid to men, regardless of whether the men had families or not. Later she exposed insurance regulations that reduced married women's access to unemployment benefits and health insurance.

In 1929 Rathbone entered parliament as an independent MP for the Combined English Universities. One of her first speeches was about clitoridectomy in Kenya. During the Depression, she campaigned for cheap milk and better benefits for the children of the unemployed. In 1931 she helped to organise the defeat of a proposal to abolish the university seats in the parliament and won re-election in 1935. 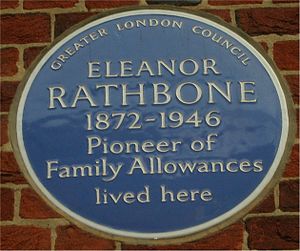 Blue plaque on her house in Tufton Street, Westminster

Rathbone realised the nature of Nazi Germany and in the 1930s joined the British Non-Sectarian Anti-Nazi Council to support human rights. In 1936 she began to warn about a Nazi threat to Czechoslovakia. She became an outspoken critic of appeasement in Parliament. She denounced British complacency in Hitler's remilitarisation of the Rhineland, the Italian conquest of Abyssinia and about the Spanish Civil War. Once she tried to hire a ship to run the blockade of Spain and remove Republicans at risk from reprisals.

Her determination was such that junior ministers and civil servants of the Foreign Office would reputedly duck behind pillars when they saw her coming. She supported the points of Winston Churchill and Clement Attlee but earned the enmity of Neville Chamberlain.

In 1936, Rathbone was one of several people who supported the British Provisional Committee for the Defence of Leon Trotsky, and signed a letter to the Manchester Guardian defending Trotsky's right to asylum and calling for an international inquiry into the Moscow Trials.[3]

On 30 September 1938, Rathbone denounced the just-publicised Munich Accords. She pressured the parliament to aid the Czechoslovaks and grant entry for dissident Germans, Austrians and Jews. In late 1938 she set up the Parliamentary Committee on Refugees to take up individual cases from Spain, Czechoslovakia and Germany. During World War II she regularly chastised Osbert Peake, undersecretary at the Home Office, and in 1942 pressured the government to publicise the evidence of the Holocaust.

In 1945, the year before her death, Eleanor Rathbone saw the Family Allowances Act pass into law.

The School of Law and Social Justice at the University of Liverpool renders homage to Eleanor by carrying her name, and Edge Hill University has a hall of residence called Eleanor Rathbone in honour of her work as a social reformer.[4]

Papers of Eleanor Rathbone are held at The Women's Library at the Library of the London School of Economics, ref 7ELR