Eleanor of Castile, Queen of Navarre

Eleanor of Castile (after 1363 – 27 February 1416) was an infanta of Castile and the Queen consort of Navarre.

She was the daughter of King Henry II of Castile and his wife, Juana Manuel of Castile, from a cadet branch of the Castilian royal house. Eleanor was a member of the House of Trastámara.

Eleanor was subject to marriage plans with Ferdinand I of Portugal in 1371 however, the King refused the match as he had secretly married noblewoman Leonor Telles de Menezes.[1]

A betrothal took place in 1373 in Burgos with Prince Charles, heir to his father Charles II of Navarre. The couple were married at Soria in May 1375.[2] A testament dated at Burgos on 29 May 1374, shows that King Henry II bequeathed property to his daughter Eleanor as a part of her dowry.[3]

The Years in Castile

However, the newly married royal couple went through certain marital disputes. In 1388, Eleanor asked at a meeting between her husband and her brother John I of Castile, for permission to retire for some time to her homeland of Castile, in order to recover from an illness in the local climate, which she had believed to be best for her health. She took her young daughters, whom she bore her husband during the first thirteen years of their marriage. Eleanor and her children resided in Valladolid and by 1390 she bore two more daughters to Charles. Two years later, she was demanded by her husband to return because they needed to be crowned King and Queen of Navarre as her father-in-law King Charles had died. Eleanor's brother King John supported the request of Charles III. Eleanor did not contend, claiming she was ill-treated in Navarre and believed members of the Navarrese nobility wished to poison her. As a result, Eleanor remained in Castile whilst her husband was crowned in February 1390 in Pamplona. By the end of the 1390s, Eleanor had given her husband six daughters, all surviving infancy but no sons and so for this reason, Eleanor handed her oldest daughter Joanna over to Charles III as she was heiress to the Kingdom.

0n 9 October 1390, Eleanor's brother John died and was succeeded by his minor son Henry. Charles then again requested Eleanor's return to Navarre however, she refused. Eleanor opposed her nephew's accession and she formed the League of Lillo along with her illegitimate half-brother Fadrique and her cousin Pedro. King Henry opposed the League, he besieged Eleanor in her castle at Roa around mid-1394 and obliged her to return to her husband in February 1395.[4]

Eleanor then returned to Charles and was very involved in the political life of Navarre. Her relationship with her husband improved and she bore him the long-awaited sons Charles and Louis however, they died young. On 3 June 1403 her coronation as Queen of Navarre took place in Pamplona. Upon several occasions when Charles stayed in France, Eleanor took to the role of regent. She also helped to maintain good relations between Navarre and Castile. As a result of the good relations, members of the Castillian nobility including the Duke of Benavente and members of the powerful families of Dávalos, Mendoza and Zuñiga settled in Navarre.

Upon the couple's absences, their daughter Joanna acted as regent as she was heiress. Tragically, Joanna died in 1413 without issue and in the lifetime of both her parents therefore the succession turned to their second daughter Blanche who would eventually succeed as Queen of Navarre upon Charles' death.

There is confusion surrounding Eleanor's death. She is believed to have died at Olite on 27 February 1415 or at Pamplona 5 March 1416.[5] Her husband died in 1425 and they were buried together at Pamplona in the Cathedral of Santa María la Real. 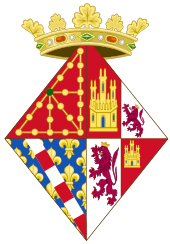 The coat of arms of Eleanor as Queen of Navarre

Eleanor and Charles had eight children, five of their daughters lived to adulthood: