She was born at Woodstock Palace in Oxfordshire to King Edward II of England and his queen Isabella of France.[1] She was a younger sister of Edward III of England and the second wife of Reginald II of Guelders, "the Black". Eleanor’s maternal grandfather was famous King Philip the Fair.[2]

The princess was named after her paternal grandmother, Eleanor of Castile. £333 was given for her churching by father. In 1324 she was taken into care by her cousin Eleanor de Clare then sent to the care of Ralph de Mothermer and Isabella Hastings with her younger sister Joan of the Tower at Pleshey. In 1325, there were negotiations between England and Castile for Eleanor to be betrothed to Alphonso XI of Castile, but this fell through due to the dowry.

Eleanor was reunited with her mother and in 1330 negotiations were made by her mother for her and her brother John of Eltham, Earl of Cornwall to marry a son and daughter of her relative Philip VI of France, however they fell through also.

In May 1332 Eleanor married the reigning Count of Guelders, Reinoud II "the black" (English: Reginald), of the House of Wassenberg (born c. 1287), a marriage arranged by her mother's cousin Joan of Valois. The groom, quite dark of colour and character, was a widower with four daughters. He was known for having imprisoned his father for over six years.

As she sailed from Sandwich, her wedding trousseau included a wedding gown of Spanish cloth, caps, gloves, shoes, a bed, rare spices and loaves of sugar.

She was well received in Guelders and bore her husband two sons:

Due to her unhappy childhood, Eleanor grew nervous and over-eager to please her husband, who tired of her and sent her from court (1338) by pretending she had leprosy. Her husband then tried to annul the marriage. Eleanor turned up in Court in Nijmegen to contest the annulment, and proceeded to strip down, proving she was no leper, and thus forcing her husband to take her back. He died from a fall from his horse on 12 October 1343.

After the death of her spouse, Eleanor became the regent of Guelders for her nine-year-old son Reginald. Her regency was official and formal, but she had trouble in getting it recognized, and in 1344, she was forced to resign her post as regent. She and Reginald later quarreled over making peace with his younger brother, and he confiscated her lands.

On 22 April 1355, twelve years after she became a widow, Eleanor died in poverty in a Cistercian convent aged 36. She had been too proud to ask her brother Edward III for help and was buried in Deventer Abbey. Her tombstone had the simple inscription ELEANOR on it; however, in England, on the south side of Queen Philippa of Hainault's tomb in Westminster Abbey there is an image of her and her husband. 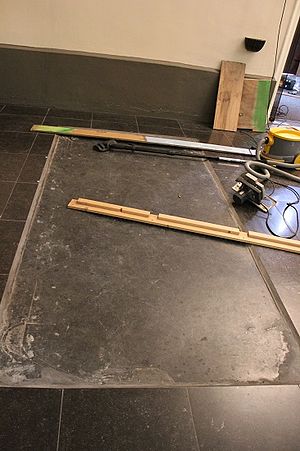 Eleanor of Woodstock Tombstone at the Broederenchurch in Deventer