Not to be confused with Super Tuesday, for primary elections

Election Day in the United States is the day set by law for the general elections of public officials. It occurs on the Tuesday right after the first Monday in November[1](this does not necessarily mean the "first Tuesday" in a month because the first day of a month can be a Tuesday). The earliest possible date is November 2, and the latest possible date is November 8. The 2012 election was held on November 6, 2012.

For federal offices (President, Vice President, and United States Congress), Election Day occurs only in even-numbered years. Presidential elections are held every four years, in years divisible by four, in which electors for President and Vice President are chosen according to the method determined by each state. Elections to the United States House of Representatives and the United States Senate are held every two years; all Representatives serve two-year terms and are up for election every two years, while Senators serve six-year terms, staggered so that one-third of Senators are elected in any given general election. General elections in which presidential candidates are not on the ballot are referred to as midterm elections. Terms for those elected begin in January the following year; the President and Vice President are inaugurated ("sworn in") on Inauguration Day, which is usually on January 20.

Many state and local government offices are also elected on Election Day as a matter of convenience and cost saving, although a handful of states hold elections for state offices (such as governor) during odd-numbered "off years", or during other even-numbered "midterm years".

Congress has mandated a uniform date for presidential (3 U.S.C. § 1) and congressional (2 U.S.C. § 1 and 2 U.S.C. § 7) elections, though early voting is nonetheless authorized in many states.

Election Day is a civic holiday in some states, including Delaware, Hawaii, Kentucky, Montana, New Jersey, New York, Ohio, West Virginia, and the territory of Puerto Rico. Some other states require that workers be permitted to take time off from employment without loss of pay. California Elections Code Section 14000 provides that employees otherwise unable to vote must be allowed two hours off with pay, at the beginning or end of a shift. A coincidental federal holiday, Democracy Day, has been unsuccessfully proposed.

No federal law regulated the 1788 federal election. In 1792, federal law permitted each state to conduct presidential elections in the state (i.e., to choose their electors) at any time in a 34-day period[2] before the first Wednesday of December, which was the day set for the meeting of the electors of the U.S. president and vice-president (the Electoral College), in their respective states.[3] This gave each state some flexibility in the holding of their elections. An election date in November was seen as convenient because the harvest would have been completed (important in an agrarian society) and the winter-like storms would not yet have begun in earnest (especially an advantage in the days before paved roads and snowplows). However, in this arrangement the states that voted later could be influenced by a candidate's victories in the states that voted earlier, a problem later exacerbated by improved communications via train and telegraph. In close elections, the states that voted last might well determine the outcome.[4]

A uniform date for choosing presidential electors was instituted by the Congress in 1845.[1] Many theories have been advanced as to why the Congress settled on the first Tuesday after the first Monday in November.[5] The actual reasons, as shown in records of Congressional debate on the bill in December 1844, were fairly prosaic. The bill initially set the day for choosing presidential electors on "the first Tuesday in November," in years divisible by four (1848, 1852, etc.). But it was pointed out that in some years the period between the first Tuesday in November and the first Wednesday in December (when the electors are required to meet in their state capitals to vote) would be more than 34 days, in violation of the existing Electoral College law. So, the bill was reworded to move the date for choosing presidential electors to the Tuesday after the first Monday in November, a date scheme already used in New York.[6] The period between Election Day and the first Wednesday in December is always 29 days.[citation needed] The effect of the change was to make November 2 the earliest day on which Election Day may fall.

In 1845, the United States was largely an agrarian society. Farmers often needed a full day to travel by horse-drawn vehicles to the county seat to vote. Tuesday was established as election day because it did not interfere with the Biblical Sabbath or with market day, which was on Wednesday in many towns.[7]

In modern times, the United States is no longer primarily an agrarian society, and Tuesday is now normally a work day throughout the country with most voters working on that day. This has led activists to object to Election Day being on a Tuesday on the grounds that it currently decreases voter turnout. They advocate either making Election Day a federal holiday, as in the Democracy Day proposal, or allowing voters to cast their ballots over two or more days. The United Auto Workers union has negotiated making Election Day a holiday for workers of U.S. domestic auto manufacturers. Some employers allow their employees to come in late or leave early on Election Day to allow them an opportunity to get to their precinct and vote. Activists encourage voters to make use of early voting and postal voting facilities when available and convenient.

Most states allow for early voting, allowing voters to cast ballots before the Election Day. Early voting periods vary from 4 to 50 days prior to Election Day. Unconditional early voting in person is allowed in 32 states and in D.C.[8] Also, most states have some kind of absentee ballot system. Unconditional absentee voting by mail is allowed in 27 states and D.C., and with an excuse in another 21 states.[8] Unconditional permanent absentee voting is allowed in 7 states and in D.C.[8] In Oregon and Washington state all major elections are by postal voting, with ballot papers sent to voters several weeks before Election Day.[9] In Oregon, all postal votes must be received by a set time on Election Day, as is common with absentee ballots in most states (except overseas military ballots which receive more time by federal law). Washington State requires postal votes be postmarked by Election Day. For the 2008 presidential election, 32% of votes were early votes.[10] Colorado is now the 3rd state to allow voters to cast ballots by mail. 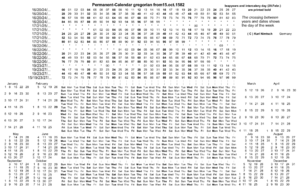 This perpetual calendar can be used to find the first Tuesday after the first Monday in November for any year through A.D. 2799.

Elected offices of municipalities, counties (in most states), and other local entities (such as school boards and other special-purpose districts) have their elections subject to rules of their state, and in some states, they vary according to choices of the jurisdiction in question. For instance, in Connecticut, all towns, cities, and boroughs hold elections in every odd-numbered year, but as of 2004, 16 have them on the first Monday in May, while the other 153 are on Election Day. In Massachusetts, the 50 cities are required to hold their elections on Election Day, but the 301 towns may choose any date, and most have traditionally held their elections in early spring, after the last snowfall.