Azerbaijan elects on national level a head of state – the president – and a legislature. The president is elected for a five-year term by the people; before a referendum changed this in 2009, the position was limited to two terms. The National Assembly (Milli Məclis) has 125 members. Before 2005 100 members elected for a five-year term in single-seat constituencies and 25 members elected by proportional representation. Since 2005 all 125 members are elected in single-seat constituencies. Azerbaijan is a one party dominant state. Opposition parties beside the New Azerbaijan Party are allowed but are widely considered to have no real chance of gaining power.

On Sunday, 7 November 2010, elections for parliament were held. On Wednesday, 9 October 2013, the most recent presidential election was held. 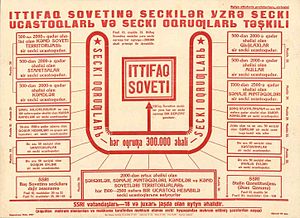