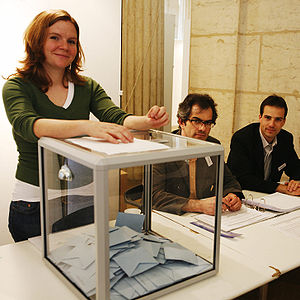 Scene inside a polling station during the French presidential election of 2007: election officials and a standard transparent ballot box.

France is a unitary semi-presidential republic with a bicameral legislature. Public officials in the legislative and executive branches are either elected by the citizens (directly or indirectly) or appointed by elected officials. Referendums may also be called to consult the French citizenry directly on a particular question, especially one which concerns amendment to the Constitution.

France elects on its national level a head of state – the president – and a legislature.

In addition, French citizens elect a variety of local governments. There also are public elections for some non-political positions, such as those for the judges of courts administering labour law (conseils de prud'hommes), elected by workers and employers, or those for judges administering cases of rural land leases.

French politics has ordinarily displayed some tendencies characterizing a two-party system in which power alternates between relatively stable coalitions, each being led by a major party: on the left, the Socialist Party, on the right, Les Républicains and its predecessors. This pattern was upset in 2017, when neither of those parties' candidates reached the second round of the presidential election and the newly formed party En Marche! gained both the presidency and a comfortable majority in the National Assembly.

Elections are conducted according to rules set down in the Constitution of France, organisational laws (lois organiques), and the electoral code. Voting is not compulsory.

Elections are held on Sundays.[1] The campaigns end at midnight the Friday before the election;[2] then, on election Sunday, by law, no polls can be published,[3] no electoral publication and broadcasts can be made.[4] The voting stations open at 8 am and close at 6 pm in small towns or at 8 pm in cities, depending on prefectoral decisions. By law, publication of results or estimates is prohibited prior to that time; such results are however often available from the media of e.g. Belgium and Switzerland, or from foreign Internet sites, prior to that time. The first estimate of the results are thus known at Sunday, 8pm, Paris time; one consequence is that voters in e.g. French Guiana, Martinique and Guadeloupe knew the probable results of elections before polling booths close. It has been alleged that this discourages voting in these places. For this reason, since the 2000s,[when?] elections in French possessions in the Americas, as well as embassies and consulates there, are held on Saturdays as a special exemption.

The next national election will take place in 2022. Current President Emmanuel Macron is eligible for re-election in that year. 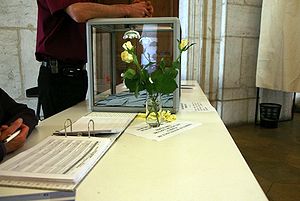 Standard transparent ballot box used in France. The voter puts the envelope containing the name or the list of people for whom he or she votes and then signs the electoral roll to avoid double votes. 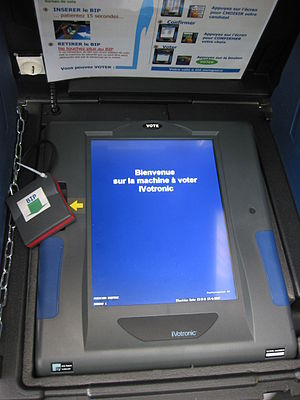 Some French cities use voting machines.

With the exception of senatorial election, for which there is an electoral college, the voters are French citizens over the age of 18 registered on the electoral rolls. People are automatically registered on reaching the age of 18. For municipal and European, but not national elections, citizens aged 18 or older of other European Union countries may vote in France. Registration is not compulsory, but the absence of registration precludes the possibility of voting.

Citizens may register either in their place of residence or in a place where they have been on the roll of taxpayers for local taxes for at least 5 years, but not in more than one place. Citizens living abroad may register at the consulate responsible for the region in which they live.

Only citizens legally registered as voters can run for public office.[5]

There are exceptions to the above rules. Convicted criminals may be deprived of their civic rights, which include the right to vote, for a certain period of time depending on the crime. In particular, elected officials who have abused public funds may be deprived of the right to run for national public office for as long as 10 years. The application of such rules in the case of certain politicians has been controversial; see for instance the case of Alain Juppé.

Voting by proxy is possible when the citizen cannot easily attend the polling station (reasons include: health problems, the citizen does not live in the voting constituency, away for work or vacations, jailed but has not yet been sentenced and deprived of civic rights etc.) The citizen designates a proxy, who must be a voter from the same commune. The designation of the proxy must be made before a legally capable witness: a judge, a judicial clerk, or an officier of judicial police, or, outside France, before an ambassador or consul. In the case of handicapped or severely ill people, an officer of judicial police or delegate thereof can be sent to the home of the citizen to witness the designation. The procedure is meant to avoid pressures on voters.

For elections to the European Parliament and some local elections, proportional voting is used.

The 577 members of the National Assembly are elected using a two-round system with single-member constituencies. To be elected in the first round, a candidate is required to secure an absolute majority of votes cast, and also to secure votes equal to at least 25% of eligible voters in their constituency. Should none of the candidates satisfy these conditions, a second round of voting ensues. Most constituencies proceed to a second round election. Only first-round candidates with the support of at least 12.5% of eligible voters are allowed to participate, but if only 1 candidate meets that standard the two candidates with the highest number of votes in the first round may continue to the second round. In the second round, the candidate with a plurality is elected. Of the 577 constituencies, 539 are in metropolitan France, 27 are in overseas departments and territories and 11 are for French citizens living abroad.[6]

Primary elections, within registered political parties, are used to select presidential candidates for the general election. Primaries also use two-round runoff voting when there are multiple candidates within a party. (see Category:Primary elections in France). Open primaries, where any eligible voter may participate with minimal requirements, also occur. 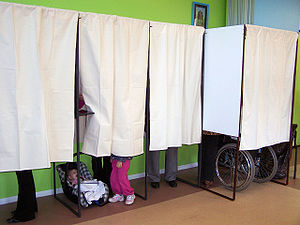 In general, voting is done using paper and manual counting. The voter gets pre-printed ballot papers (bulletin) from a table at the entrance of the voting office (mail-in voting is not allowed in France[7]). There is one ballot paper for each candidate, pair of candidates (for departmental elections) or list. These ballot papers are also sent by mail to voters before the election. The voter then has their identity and registration checked by an official, after which the voter takes an envelope. If they also act as a proxy for another voter, they take a second envelope. The voter then enters a curtained booth (isoloir), where they are hidden from sight, and inserts the ballot paper of their candidate into the envelope. They walk to the ballot box, where the president of the voting office or their deputy formally checks their identity[8][9] (in conurbations with more than 5000 inhabitants, an identification document must be shown[10]). After the officials have acknowledged their right to vote, the ballot box is opened and the voter inserts the envelope. One of the officials, traditionally loudly, announces "A voté! (Has voted!)". This is purely ceremonial and has a double meaning: the voter's voix (voice) will be taken into account and they have accomplished their civic duty. The voter then signs the voters' list and their voter registration card is stamped.

Procedures differ when electronic voting is used. It is not widespread in France, but is used in some cities, despite controversy over its safety and effectiveness.

Regional elections have been held since 1986 to elect regional councillors and regional presidents: all elected to serve 6-year terms.

Elections for the French delegation to the European parliament are held every five years.

French senators are renewed by halves every six years through an indirect electoral college composed of elected officials and general, regional, and some local councillors.

Municipal elections to elect city mayors and councillors are held every six years.

Departmental (Cantonal prior to 2015)

The Constitution of France defines in Article 3 that "National sovereignty shall vest in the people, who shall exercise it through their representatives and by means of referendum."[11] The Constitution describes two ways for holding a referendum:

The Constitution explicitly states that a referendum can be called only on a Government Bill "which deals with the organization of the public authorities, or with reforms relating to the economic or social policy of the Nation, and to the public services contributing thereto, or which provides for authorization to ratify a treaty which, although not contrary to the Constitution, would affect the functioning of the institutions" (Article 11 of the Constitution[11]).

The second procedure for holding a referendum has several limitations:

The second procedure for holding a referendum was added to the Constitution in 2008, and it still has not come into effect (as of 2013). It will come into effect when appropriate legislation is implemented by the Parliament.

The Constitution of France can be amended in two ways:

Most constitutional revisions went through the super-majority of the Parliament in Congress.

Ratification of treaties of accession of states to the EU must go through the same procedure as amendment of Constitution of France. All of ratifications went through the super-majority of the Parliament, except the first EU enlargement in 1973.

There were 9 referendums in the Fifth Republic: