Elections in Germany include elections to the Bundestag (Germany's federal parliament), the Landtags of the various states, and local elections.

Several articles in several parts of the Basic Law for the Federal Republic of Germany govern elections and establish constitutional requirements such as the secret ballot, and requirement that all elections be conducted in a free and fair manner. The Basic Law also requires that the federal legislature enact detailed federal laws to govern elections; electoral law(s). One such article is Article 38 which is regarding the election of deputies in the federal Bundestag. Article 38.2 of the Basic Law establishes universal suffrage: "Any person who has attained the age of eighteen shall be entitled to vote; any person who has attained the age of majority may be elected."

German federal elections are for all members of the Bundestag, which in turn determines who is the Chancellor of Germany. Federal elections were held in 2009 and in 2013.

After the unification of Germany under Emperor Wilhelm I in 1871, elections were held to the German Reichstag or "Imperial Assembly", which supplanted its namesake, the Reichstag of the Norddeutscher Bund. The Reichstag could be dissolved by the Kaiser or, after the abdication of Wilhelm II in 1918, the Reichspräsident. With the Weimar Republic's Constitution of 1919, the voting system changed from single-member constituencies to proportional representation. The election age was reduced from 25 to 20 years of age.[1] Women's suffrage had already been established by a new electoral law in 1918 following the November Revolution of that year.

Following the Nazi seizure of power in January 1933, another national election was held on March 5. This was the last competitive election before World War II, although it was neither free nor fair. Violence and intimidation by the Sturmabteilung, SS and Stahlhelm had been underway for months against trade-unionists, communists, social democrats, and even centre-right Catholics.[2] On February 27th, just prior to the election, the Reichstag Fire Decree suspended freedom of the press and most civil liberties. Mass arrests followed, including all Communist (KPD) and several Social Democrat (SPD) delegates to the Reichstag. 50000 members of the Hilfspolizei (auxiliary Nazi police) "monitored" polling places on election day to further intimidate voters.[3] While the NSDAP performed better than it had in the elections of November 1932, it still won only 43% of the vote. By placing their rivals in jail and intimidating others not to take their seats, the Nazis went from a plurality to the majority. Just two weeks after election, the Enabling Act of 1933 effectively gave Hitler dictatorial power. Three more elections were held in Nazi Germany before the war. They all took the form of a one-question referendum, asking voters to approve a predetermined list of candidates composed exclusively of Nazis and nominally independent "guests" of the party. 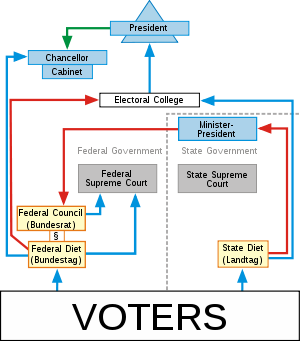 Federal elections are conducted approximately every four years, resulting from the constitutional requirement for elections to be held 46 to 48 months after the assembly of the Bundestag.[4] Elections can be held earlier in exceptional constitutional circumstances: for example, were the Chancellor to lose a vote of confidence in the Bundestag, then, during a grace period before the Bundestag can vote in a replacement Chancellor, the Chancellor could request the Federal President to dissolve the Bundestag and hold elections. Should the Bundestag be dismissed before the four-year period has ended, elections must be held within 100 days. The exact date of the election is chosen by the President[5] and must be a Sunday or public holiday.

German nationals over the age of 18 who have resided in Germany for at least three months are eligible to vote. Eligibility for candidacy is essentially the same.

The federal legislature in Germany has a one chamber parliament—the Bundestag (Federal Diet); the Bundesrat (Federal Council) represents the regions and is not considered a chamber as its members are not elected. The Bundestag is elected using a mixed member proportional system. The Bundestag has 598 nominal members, elected for a four-year term. Half, 299 members, are elected in single-member constituencies by first-past-the-post voting, while a further 299 members are allocated from party lists to achieve a proportional distribution in the legislature, conducted according to a form of proportional representation called the Mixed member proportional representation system (MMP). Voters vote once for a constituency representative, and a second time for a party, and the lists are used to make the party balances match the distribution of second votes. Overhang seats may add to the nominal number of 598 members: for example, in the 2009 federal election there were 24 overhang seats, giving a total of 622 seats. This is caused by larger parties winning additional single-member constituencies above the totals determined by their proportional party vote.

In 2008, some modifications to the electoral system were required under an order of the Federal Constitutional Court. The court had found that a provision in the Federal Election Law by which it was possible for a party to experience a negative vote weight, thus losing seats due to more votes, violated the constitutional guarantee of the electoral system being equal and direct.[6]

The court allowed three years to amend the law. Accordingly, the 2009 federal election was allowed to proceed under the previous system. The changes were due by 30 June 2011, but appropriate legislation was not completed by that deadline. A new electoral law was enacted in late 2011, but declared unconstitutional once again by the Federal Constitutional Court upon lawsuits from the opposition parties and a group of some 4,000 private citizens.[7] 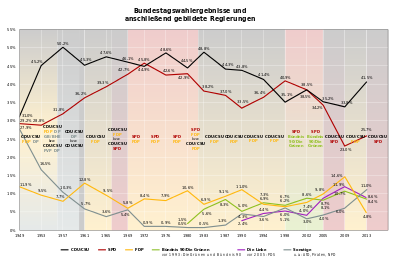 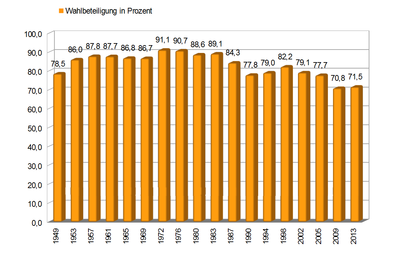 State elections in the Federal Republic of Germany

State elections are conducted under various rules set by the Länder (states). In general they are conducted according to some form of party-list proportional representation, either the same as the federal system or some simplified version. The election period is generally four to five years, and the dates of elections vary from state to state.

In the German Democratic Republic, elections to the Volkskammer were effectively controlled by the Socialist Unity Party of Germany and state hierarchy, even though multiple parties existed pro forma. The 18 March 1990 election were the first free ones held in the GDR, producing a government whose major mandate was to negotiate an end to itself and its state.

Local elections in Germany (German: Kommunalwahlen) include elections for most regional and local subdivisions, unless their representatives are appointed or elected by another assembly or office. Such local elections are conducted for representatives in districts, cities, towns, villages and various other administrative regional organizations. In cities and towns local elections usually include voting for a lord mayor or mayor. Smaller villages and settlements may elect a representative (German: Ortsvorsteher) with limited administrative power. Local elections are also often combined with polls about important local matters and questions of general public interest (i.e. the construction of local roads or other infrastructure facilities). While such polls are not legally binding in most cases, their results have considerable influence on local political decisions.

After the Maastricht Treaty of 1992 to strengthen the European integration, Germany and other EU member states implemented legislative changes to grant foreigners of other EU countries the right to vote in local elections in their host country. Foreign EU citizens can vote in elections on district and municipal level in Germany, after the German states adapted their regulations between 1995 and 1998.