Elections in the People's Republic of China

From Infogalactic: the planetary knowledge core
Jump to: navigation, search
See also: Legislative system of the People's Republic of China 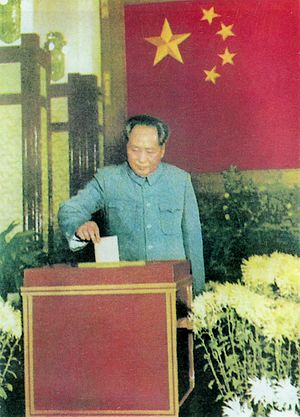 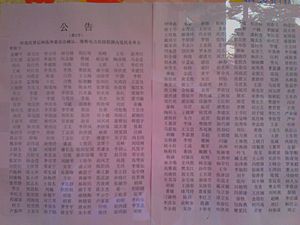 A list of voters posted in a neighbourhood in Shenzhen, Guangdong. April 11, 2014.

Under the electoral law of 1 July 1979, nomination of candidates for direct elections (in counties, townships, etc.) can be made by the Communist Party of China, the various other political parties, mass organizations, or any voter seconded by at least 3 others.[5] The final list of electoral candidates must be worked out through "discussion and consultation" or primary elections,[5] but in practice is determined by the election committee in consultation with small groups of voters, through a process known as the "three ups and three downs" (三上三下, sān shàng sān xià).[6] According to the Chinese government, the "three ups and three downs" process is supposed to operate as follows:

The number of candidates for an election should be 50% to 100% larger than the number of seats, voting is to be done by secret ballot, and voters are theoretically entitled to recall elections.[8] Eligible voters, and their electoral districts, are chosen from the family (户籍) or work unit (单位 or dānwèi) registers for rural and urban voters, respectively, which are then submitted to the election committees after cross-examination by electoral district leaders.[9] Electoral districts at the basic level (townships, towns, etc.) are composed of 200–300 voters but sometimes up to 1000, while larger levels (counties, etc.) are composed of 2000–5000 voters.[10]

Since taking power in 1978, Deng Xiaoping experimented with direct democracy at the local level. Villages have been traditionally the lowest level of government in China's complicated hierarchy of governance. In the early 1980s, a few southern villages began implementing "Vote for your Chief" policies, in which free elections are intended to be held for the election of a village chief, who holds a lot of power and influence traditionally in rural society. Many of these elections were successful, involving candidate debates, formal platforms, and the initiation of secret ballot boxes. The suffrage was universal, with all citizens above age 18 having the right to vote and be elected. Such an election comprises usually over no more than 2000 voters, and the first-past-the-post system is used in determining the winner, with no restriction on political affiliation. The elections, held every three years, are always supervised by a higher level of government, usually by a County Government.

Under the Organic Law of Village Committees, all of China's approximately 1 million villages are expected to hold competitive, direct elections for sub-governmental village committees. A 1998 revision to the law called for improvements in the nominating process and enhanced transparency in village committee administration. The revised law also explicitly transferred the power to nominate candidates to villagers themselves, as opposed to village groups or Chinese Communist Party (CCP) branches. According to the Ministry of Civil Affairs, as of 2003 the majority of provinces had carried out at least four or five rounds of village elections.

According to BBC News, state media regularly reports on vote buying and corruption during these elections to discredit wider implementation in higher levels of government.[14]

Some townships and urban areas also have experimented with direct elections of local government leaders.

People's Congresses of provinces (省), directly controlled municipalities (直辖市), and cities divided into districts (设区的市) are indirectly elected by the People's Congress of the level immediately below.[1]

The Local People's Congress at each administrative level—other than the village level in rural areas, which hold direct elections—elects candidates for executive positions at that level of government.

The National People's Congress (NPC) has 2987 members, elected for five year terms. Deputies are elected (over a three-month period) by the people's congresses of the provinces of China, autonomous regions, municipalities directly under the Central Government, special administrative regions of Hong Kong and Macau, and the armed forces. The size of each college of delegates is related to the number of electors in the constituency. 36 deputies are elected in Hong Kong.

In the 2008 election for the Chairman of the Central Military Commission, for example, president Hu Jintao, the only candidate, received a majority of approval votes. However, some electors chose to write in other names; the most popular write-in candidate was former premier Zhu Rongji.

For appointed positions requiring the approval of the People's Congress, such as the premier and cabinet ministers, delegates may either approve or disapprove of the appointment. Relevant laws provide that if the single candidate does not receive more than 50% approval, the position is left vacant until the next session of the People's Congress. This rarely happens in practice, and has never happened at the national level.

Officially, the People's Republic of China is a multi-party socialist state under the leadership of the Communist Party of China. There are a small number of independent candidates for people's congress, particularly in neighborhoods of major cities, who sometimes campaign using weibos posted on the internet.[16][17]

Although there is no legal requirement for either membership in or approval by the Communist Party of China (CPC), in practice the membership of the higher people's congresses and people's governments are largely determined by the Party.[18] Independent candidates are strongly discouraged and face government intervention in their campaigns.[19] In practice, the power of parties other than the Communist Party of China is severely limited.[17] Because none of the minor parties have independent bases of support and rely on Communist Party approval for appointment to positions of power, none have the capacity to serve as a true opposition party. Whereas there are Communist Party Committees in People's Congresses at all levels, none of the other parties operate any form of party parliamentary groups. In order to represent different segments of the population and bring in technical expertise, the CCP does ensure that a significant minority of people's congress delegates are either minor party members or unaffiliated, and there is tolerance of disagreement and debate in the legislative process where this does not fundamentally challenge the role of the Communist Party.

Communist Party regulations require members of the People's Congresses, People's Governments, and People's Courts to implement CPC recommendations (including nominations) pursuant to the CPC Regulations on the Selection and Appointment Work of Cadres of Both CPC and Government Organs.[18] Elected leaders remain subordinate to the corresponding CCP secretary, and most are appointed by higher-level party organizations.[18] Furthermore, while legally responsible for the oversight of the administration, it is difficult for a person in a people's congress without party support to exercise effective control or power over the administration of the executive at a given level.

No parties other than the Communist Party and the eight allied parties were allowed at the elections, which took place from October 2012 to March 2013. The same nine parties are represented at the Chinese People's Political Consultative Conference.

The first electoral law was passed in March 1953, and the second on 1 July 1979.[5] The 1979 law allowed for ordinary voters to nominate candidates, unlike the 1953 law which provided no such mechanism.[5] The 1979 law was revised in 1982, removing the reference to the ability of political parties, mass organizations, and voters to use "various forms of publicity", and instead instructing that the "election committees should introduce the candidates to the voters; the political parties, mass organizations, and voters who recommend the candidates can introduce them at group meetings of the voters".[21] In 1986, the election law was amended to disallow primary elections.[22]

Traditionally, village chiefs were appointed by the township government.[4] The Organic Law of Village Committees was enacted 1987 and implemented in 1988, allowing for direct election of village chiefs instead.[23]