An elective monarchy is a monarchy ruled by an elected monarch, in contrast to a hereditary monarchy in which the office is automatically passed down as a family inheritance. The manner of election, the nature of candidate qualifications, and the electors vary from case to case. Historically it is not uncommon for elective monarchies to transform into hereditary ones over time, or for hereditary ones to acquire at least occasional elective aspects.

Many, if not most, kingdoms were officially elective historically, though the candidates were typically only from the family of the deceased monarch. Eventually, however, most elected monarchies introduced hereditary succession, guaranteeing that the title and office stayed within the royal family and specifying, more or less precisely, the order of succession.

Today, almost all monarchies are hereditary monarchies in which the monarchs come from one royal family with the office of sovereign being passed from one family member to another upon the death or abdication of the incumbent.

The kings of Macedon and of Epirus were elected by the army, which was similar in composition to the ecclesia of democracies, the council of all free citizens. Military service often was linked with citizenship among the male members of the royal house.

In the ancient Kingdom of Rome, the kings were elected by the Assemblies. Once the Roman kings were overthrown, there remained an absolute prohibition for royal establishment in the Roman constitution, a prohibition which formally remained in place during imperial times, both Roman and Byzantine, although in practice the empire was an absolute monarchy. Therefore, the office of Roman and Byzantine emperor remained vaguely elective (albeit with the election procedure never strictly defined, but generally understood to be a matter for the Senate) and heredity never was, and could never be, formally established in law. In order to bypass this prohibition and ensure dynastic continuity, many reigning Byzantine emperors had their heirs crowned co-emperor so that the throne could not be considered vacant at their own death and thus the need for succession by election would not arise.

In medieval Serbia a strong level of collective parliamentarism was evolved, which elected the Prince. The rulers often in respect to tradition remained a member of the dynasty, even more so with the recognition as a Kingdom in 1077 and the title's restoration after loss in 1217 which strengthened the Monarch's authority, however they were elected all the way until even the Imperial period. It was only in the Byzantine-modelled later Serbian Despotate that the monarchy was de facto transferred into a hereditary monarchy.

The Holy Roman Empire is perhaps the best-known example of an elective monarchy. However, from 1453 to 1740, a Habsburg was always elected emperor, becoming unofficially hereditary.[1] During that period, the emperor was elected from within the House of Habsburg by a small council of nobles called prince-electors. The secular electoral seats were hereditary. However, spiritual electors (and other prince-(arch)bishops) were usually elected by the cathedral chapters as religious leaders, but simultaneously ruled as monarch (prince) of a territory of imperial immediacy (which usually comprised a part of their diocesan territory). Thus the prince-bishoprics were elective monarchies too. The same holds true for prince-abbeys, whose prince-abbesses or prince-abbots were elected by a college of clerics and imperially appointed as princely rulers in a pertaining territory.

Originally, the Kings of Sweden were elected by all free men at the Mora Thing. Elective monarchy continued until 1544, when the Riksdag of the Estates designated the heirs of King Gustav Vasa as the heirs to the throne. The Danish monarchy was also officially elective, although the eldest son of the reigning monarch was usually elected. This continued until 1660, when a hereditary and absolute monarchy was instituted by Frederick III. Though the monarchy of Norway was originally hereditary, it too became elective in the twelfth and thirteenth centuries. Candidates had to be of royal blood, but the kingship was elected by a council of noblemen, rather than automatically passing to the eldest son. In 1905 Prince Carl was elected King of Norway, after the male population in an election decided Norway should still be a monarchy.

The Scandinavian kingdoms were united under the Danish crown by Margaret I of Denmark in 1389, but many of her successors had the united kingdoms split up as Sweden elected a different king than Denmark and Norway upon succession. The election was usually contested through a Danish invasion of Sweden until Christian II of Denmark after his reconquest of Sweden had all those voting against him executed in the Stockholm Bloodbath (1520), which ended all support for the Danish king on the Swedish throne.

In modern times the Norwegian people voted yes to allow Prince Carl of Denmark to ascend to the Norwegian throne as King of Norway. where he took the name Håkon VII. A NO would have forced Norway to become a republic. 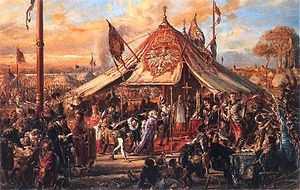 The Republic at the Zenith of Its Power. Golden Liberty. The Royal Election of 1573, by Jan Matejko
Main article: Royal elections in Poland

In Poland, after the death of the last Piast in 1370, Polish kings were initially elected by a small council; gradually, this privilege was granted to all members of the szlachta (Polish nobility). Kings of Poland and Grand Princes of Lithuania during the times of the Polish–Lithuanian Commonwealth (1569–1795) were elected by gatherings of crowds of nobles at a field in Wola, today a neighbourhood of Warsaw. Since in Poland all sons of a noble were nobles, and not only the eldest, every one of an estimated 500,000 nobles could potentially have participated in such elections in person - by far the widest franchise of any European country at the time. During the election period, the function of the king was performed by an interrex (usually in the person of the primate of Poland). This unique Polish election was termed the free election (wolna elekcja).

The Republic of Venice employed an elaborate system whereby a Great Council, consisting of over 2000 Venetian aristocrats, elected a head of government, known as a doge, who served for life. The Republic was therefore controlled by the city's wealthy noble elite. The title doge derives from the Latin dux and corresponds to the English word duke.

In 1800, leaders in Malta drafted a Declaration of Rights which was presented to the British Admiral Sir Alexander Ball, stating that they agreed to come "under the protection and sovereignty of the King of the free people, His Majesty the King of the United Kingdom of Great Britain and Ireland" - regarding the rule of the British King preferable to that of Napoleon's France and of the Knights of Malta, the two other choices available to them at the time. The Declaration further stated that "his Majesty has no right to cede these Islands to any power...if he chooses to withdraw his protection, and abandon his sovereignty, the right of electing another sovereign, or of the governing of these Islands, belongs to us, the inhabitants and aborigines alone, and without control."[2]

A system of elective monarchy existed in Anglo-Saxon England (see Witenagemot), Visigothic Spain, and medieval Scandinavia and in the Principality of Transylvania. Medieval France was an elective monarchy at the time of the first Capetian kings; the kings however took the habit of, during their reign, having their son elected as successor. The election soon became a mere formality and vanished after the reign of Philip II of France.

At the start of the 20th century, the first monarchs of several newly independent nations were elected by parliaments: Norway is the prime example. Previously, following precedent set in newly independent Greece, new nations without a well-established hereditary royal family often chose their own monarchs from among the established royal families of Europe, rather than elevate a member of the local power establishment, in the hope that a stable hereditary monarchy would eventually emerge from the process. The first king of Belgium, as well as the now-deposed royal families of Greece, Bulgaria, Albania (unsuccessfully) and Romania, were originally appointed in this manner.

In Africa, the Mali Empire functioned as both a constitutional and elective monarchy. The mansa, or emperor, had to be approved by the Great Assembly known as the Gbara, despite hereditary claims. The Kingdom of Kongo was a purer example of an elective monarchy, where blood claims had even less pull. Nobles elected a king's successor, and it was common for the successor to be of a different family as his predecessor. This form of elective monarchy existed in the kingdom from its inception in around 1400 until its complete disintegration in the early 20th century. In the pre-colonial period, a number of West African rulers, such as the kings and chieftains of the Yoruba people, were elected from amongst the various royal families of their polities by colleges of noblemen known as kingmakers.

The ancient Korean kingdom of Silla elected its first king by a conference of tribal and village elders in 57 BC; later, the monarchy of Silla became hereditary in nature.

Gopala, the first emperor of the Pala Empire was chosen by independent regional warchiefs in the 8th century.

In the Mongol Empire, the Great Khan was chosen by the Kurultai.

In the Islamic World the Caliphs, successors to Muhammad, were originally elected by consensus of the community. The first four Caliphs were elected in this fashion as Sunni Muslims believed Muhammad had originally intended before Muawiyah, the fifth caliph, turned the Caliphate into what is known as the Umayyad Dynasty, a hereditary monarchy. In Sunni Islam, the first four elected caliphs were remembered as the Four Rightly Guided Caliphs. They were elected by a process known as Shura.

Other monarchs, such as the former Shah of Iran, have been required to undergo a parliamentary vote of approval before being allowed to ascend to the throne.

In 1858, the central tribes of North Island elected Potatau te Wherowhero as their monarch. The Tainui tribal elders have continued this tradition and the New Zealand Maori Kingitanga movement alive to the present.

The Kingdom of Hawaii was a constitutional elective monarchy until its overthrow.

In the United Arab Emirates, the hereditary emirs of the emirates elects one of themselves as president of the federation.

The Tlatoanimeh of the Aztec Empire were chosen by a council of elders, nobles, and priests. He would be selected from a pool of four candidates.

An attempt to create an elective monarchy in the United States failed. Alexander Hamilton argued in a long speech before the Constitutional Convention of 1787 that the President of the United States should be an elective monarch, ruling for "good behavior" (i.e., for life, unless impeached) and with extensive powers. Hamilton believed that elective monarchs had sufficient power domestically to resist foreign corruption, yet there was enough domestic control over their behavior to prevent tyranny at home.[3] His proposal was resoundingly voted down in favor of a four-year term with the possibility of reelection. In his later defense of the Constitution in The Federalist Papers, he often hints that a lifetime executive might be better, even as he praises the system with the four-year term.

The Empire of Haiti, established in 1804, was also elective.[citation needed]

In a hereditary monarchy, election may occasionally be used to fill a vacant throne. For example, the royal family may become extinct; depending on how precisely the succession to the throne is defined in law, several candidates with equally, or almost equally, strong claims could emerge, with an election being held to choose from among them. This differs from a formally elective monarchy in that it is an extraordinary measure, and with the new monarch the succession again becomes hereditary.

Alternatively, the monarch may be deposed, as in a revolution. While sometimes a monarch may be forced to abdicate in favour of his or her heir, on other occasions the royal family as a whole has been rejected, the throne going to an elected candidate. Examples include:

Currently, the world's only true elective monarchies are: