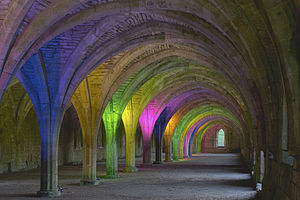 An electric light is a device that produces visible light by the flow of electric current. It is the most common form of artificial lighting and is essential to modern society,[1] providing interior lighting for buildings and exterior light for evening and nighttime activities. Before electric lighting became common in the early 20th century, people used candles, gas lights, oil lamps, and fires.[2]

The two main categories of electric lights are incandescent lamps, which produce light by a filament heated white-hot by electric current, and gas-discharge lamps, which produce light by means of an electric arc through a gas. Once the voltaic pile, created in 1800 by Alessandro Volta, became available as a power source, Humphry Davy developed the first incandescent light in 1802, followed by the first practical electric arc light in 1806. By the 1870s, Davy's arc lamp had been successfully commercialized, and was used to light many public spaces. The development of a steadily glowing filament suitable for interior lighting took longer, but by the early twentieth century Thomas Edison and others had successfully developed options, replacing the arc light with incandescents.[1][2]

The energy efficiency of electric lighting has increased radically since the first demonstration of arc lamps and the incandescent light bulb of the 19th century. Modern electric light sources come in a profusion of types and sizes adapted to a myriad of applications. Most modern electric lighting is powered by centrally generated electric power, but lighting may also be powered by mobile or standby electric generators or battery systems. Battery-powered lights, usually called "flashlights" or "torches", are used for portability and as backups when the main lights fail. The word "lamp" can refer either to a light source or an or the appliance that holds the source.

Types of electric lighting include:

Different types of lights have vastly differing efficiencies and color of light. [1]

*Color temperature is defined as the temperature of a black body emitting a similar spectrum; these spectra are quite different from those of black bodies.

The most efficient source of electric light is the low-pressure sodium lamp. It produces, for all practical purposes, a monochromatic orange/yellow light, which gives a similarly monochromatic perceprtion of any illuminated scene. For this reason, it is generally reserved for outdoor public lighting usages. Low-pressure sodium lights are favoured for public lighting by astronomers, since the light pollution that they generate can be easily filtered, contrary to broadband or continuous spectra. 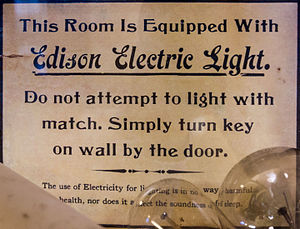 Sign with instructions on the use of light bulbs 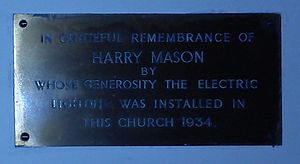 The modern incandescent lightbulb, with a coiled filament of tungsten, was commercialized in the 1920s developed from the carbon filament lamp introduced in about 1880. As well as bulbs for normal illumination, there is a very wide range, including low voltage, low-power types often used as components in equipment, but now largely displaced by LEDs

There is currently interest in banning some types of filament lamp in some countries, such as Australia planning to ban standard incandescent light bulbs by 2010, because they are inefficient at converting electricity to light. Sri Lanka has already banned importing filament bulbs because of high use of electricity and less light. Less than 3% of the input energy is converted into usable light. Nearly all of the input energy ends up as heat that, in warm climates, must then be removed from the building by ventilation or air conditioning, often resulting in more energy consumption. In colder climates where heating and lighting is required during the cold and dark winter months, the heat byproduct has at least some value.

Halogen lamps are usually much smaller than standard incandescents, because for successful operation a bulb temperature over 200 °C is generally necessary. For this reason, most have a bulb of fused silica (quartz), but sometimes aluminosilicate glass. This is often sealed inside an additional layer of glass. The outer glass is a safety precaution, reducing UV emission and because halogen bulbs can occasionally explode during operation. One reason is if the quartz bulb has oily residue from fingerprints. The risk of burns or fire is also greater with bare bulbs, leading to their prohibition in some places unless enclosed by the luminaire.

Those designed for 12 V or 24 V operation have compact filaments, useful for good optical control, also they have higher efficiencies (lumens per watt) and better lives than non-halogen types. The light output remains almost constant throughout life.

Fluorescent lamps consist of a glass tube that contains mercury vapour or argon under low pressure. Electricity flowing through the tube causes the gases to give off ultraviolet energy. The inside of the tubes are coated with phosphors that give off visible light when struck by ultraviolet energy.[3] have much higher efficiency than Incandescent lamps. For the same amount of light generated, they typically use around one-quarter to one-third the power of an incandescent.

Solid state LEDs have been popular as indicator lights since the 1970s. In recent years, efficacy and output have risen to the point where LEDs are now being used in lighting applications as well as in decorative applications such as holiday lighting.

Indicator LEDs are known for their extremely long life, up to 100,000 hours, but lighting LEDs are operated much less conservatively, and consequently have shorter lives.

LED technology is useful for lighting designers because of its low power consumption, low heat generation, instantaneous on/off control, and in the case of single color LEDs, continuity of color throughout the life of the diode and relatively low cost of manufacture.

Carbon arc lamps consist of two carbon rod electrodes in open air, supplied by a current-limiting ballast. The electric arc is struck by touching the rods then separating them. The ensuing arc heats the carbon tips to white heat. These lamps have higher efficiency than filament lamps, but the carbon rods are short lived and require constant adjustment in use. The lamps produce significant ultra-violet output, they require ventilation when used indoors, and due to their intensity they need protecting from direct sight.

Invented by Humphry Davy around 1805, the carbon arc was the first practical electric light. They were used commercially beginning in the 1870s for large building and street lighting until they were superseded in the early 20th century by the incandescent light. Carbon arc lamps operate at high powers and produce high intensity white light. They also are a point source of light. They remained in use in limited applications that required these properties, such as movie projectors, stage lighting, and searchlights, until after World War 2.

With some discharge lamps, very high voltage is used to strike the arc. This requires an electrical circuit called an igniter, which is part of the ballast circuitry. After the arc is struck, the internal resistance of the lamp drops to a low level, and the ballast limits the current to the operating current. Without a ballast, excess current would flow, causing rapid destruction of the lamp.

The simplest ballasts are just an inductor, and are chosen where cost is the deciding factor, such as street lighting. More advanced electronic ballasts may be designed to maintain constant light output over the life of the lamp, may drive the lamp with a square wave to maintain completely flicker-free output, and shut down in the event of certain faults.

Life expectancy is defined as the number of hours of operation for a lamp until 50% of them fail. This means that it is possible for some lamps to fail after a short amount of time and for some to last significantly longer than the rated lamp life. This is an average (median) life expectancy. Production tolerances as low as 1% can create a variance of 25% in lamp life. For LEDs, lamp life is when 50% of lamps have lumen output drop to 70% or less.

Lamps are also sensitive to switching cycles. The rapid heating of a lamp filament[dubious – discuss] or electrodes when a lamp is turned on is the most stressful event on the lamp. Most test cycles have the lamps on for 3 hours and then off for 20 minutes. (Some standard had to be used since it is unknown how the lamp will be used by consumers.) This switching cycle repeats until the lamps fail and the data is recorded. If switching is increased to only 1 hour on, the lamp life is usually reduced because the number of times the lamp has been turned on has increased. Rooms with frequent switching (bathroom, bedrooms, etc.) can expect much shorter lamp life than what is printed on the box.

The total amount of artificial light (especially from street light) is sufficient for cities to be easily visible at night from the air, and from space. This light is the source of light pollution that burdens astronomers and others. 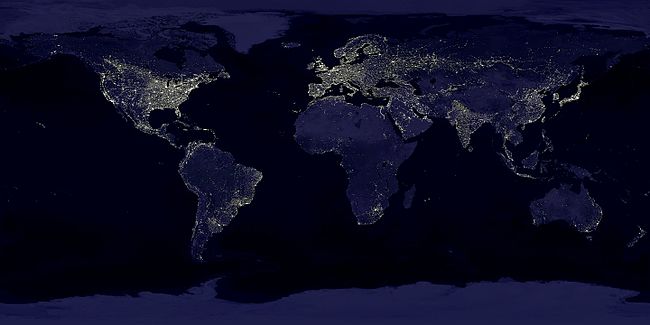 Human-made lights highlight particularly developed or populated areas of the Earth's surface, including the seaboards of Europe, the eastern United States, Japan and South Korea.