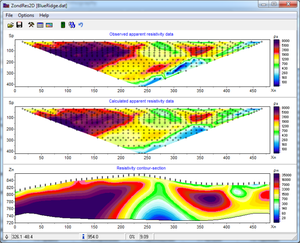 A related geophysical method, induced polarization, measures the transient response. The technique evolved from techniques of electrical prospecting that predate digital computers, where layers or anomalies were sought rather than images. Early work on the mathematical problem in the 1930s assumed a layered medium (see for example Langer, Slichter). Tikhonov who is best known for his work on regularization of inverse problems also worked on this problem. He explains in detail how to solve the ERT problem in a simple case of 2-layered medium. During the 1940s he collaborated with geophyicists and without the aid of computers they discovered large deposits of copper. As a result, they were awarded a State Prize of Soviet Union.

When adequate computers became widely available the inverse problem of ERT could be solved numerically, and the work of Loke and Barker at Birmingham University was among the first such solution, and their approach is still widely used.

With the advancement in the field of Electrical Resistivity Tomography (ERT) from 1D to 2D and now-a- days 3D, ERT has explored many fields. The applications of ERT include fault investigation, ground water table investigation, soil moisture content determination and many others. In industrial process imaging ERT can be used in a similar fashion to medical EIT, to image the distribution of conductivity in mixing vessels and pipes. In this context it is usually called Electrical Resistance Tomography, emphasising the quantity that is measured rather than imaged.