Eleonore Magdalene of Neuburg (Eleonore Magdalene Therese; 6 January 1655 – 19 January 1720) was Holy Roman Empress as the spouse of Leopold I, Holy Roman Emperor.[1] Through her marriage, she was also Queen of Bohemia and Hungary, German Queen, and Archduchess of Austria. She served as Interim Regent in 1711. She was the paternal grandmother of Empress Maria Theresa.

Born a Countess Palatine of Neuburg in Düsseldorf, Eleonore Magdalene was the oldest daughter of Philip William, Elector Palatine and his wife Elisabeth Amalie of Hesse-Darmstadt. Among her siblings were Maria Sophia, married to Peter II of Portugal and Maria Anna, married to Charles II of Spain.

Eleonor was given a good education in composition, music and poetry and could master several languages. Very early on, she displayed as very strong pious nature and fervent adherence with Catholicism, so much so that she expressed her wish to become a nun. She received several proposals, among them from James II of England.

Eleonor married Emperor Leopold I in 1676. She was a good candidate as a bride for the emperor already in 1673 because of her family's reputed great fertility and connections. Although Claudia Felicitas of Austria was chosen before her in 1674, she was ultimately chosen in 1676. None of the previous consorts of the emperors had given birth to surviving sons, and she was chosen to remedy this. Her fervent Catholicism and pious nature was much to her favor when she was chosen as future empress. As was the custom for prospective brides of the Holy Roman Emperor, she was also forced to undergo a medical examination to establish her expected fertility.

Eleonor herself accepted the marriage for the sake of parents, but she did so unwillingly, as she wished to become a nun and still did not wish to marry at all. Reportedly, she tried to burn her face by the sun to appear unattractive and thereby avoid marriage. The wedding took place in Passau 14 December 1676.

Empress Eleonor was active within charity, protected convents and supported to poor. She took control over the economy of the royal court and managed to reduce its expenses through a more effective organization. She was regarded to perform her representational duties well according to the ceremonious Spanish court routine, and actively participated in shooting matches and hunting parties as well as the religious duties associated with the pietas austriaca. She strictly adhered to all religious festivals and prescriptions, and from 1688, she devoted much time to the Marian cult, in which she was introduced by Abraham á Sancta Clara and to which she introduced her two daughters-in-law. She was an active member of the Gesellenschaft det Sklavinnen oder Leibeign Mariens, a lay order devoted to Virgin Mary, which prescribed daily religious observance and religious charity, and in 1688, she received the Sternkreuzorden. She founded Carmelite convents in Grazer and Vienna, and the Capuchin Marco d'Aviano was her confessor and adviser.

Eleonor suffered from depression and was described as self-destructive. She was drawn to the penitential side of Catholicism: as an example, she used bracelets with small spikes on the inside to torment the flesh. When court protocol demanded she visit the opera, she reportedly took a prayer book with her to distract her from the play. She hosted a court affected by her strong religious views: strict, simple and conventlike and, as it was said, in an atmosphere reminiscent of an eternal mourning period, which was somewhat ridiculed as exaggerated.

Eleonor was crowned Queen of Hungary in 1689, and Holy Roman Empress in Augsburg in 1690. She was politically active, achieved influence over her Leopold and through him managed to participate in the affairs of state. As he could not read all languages, while she was multilingual, she translated foreign political documents for him, as was the case when they were written in French. It is reported that Empress Eleonor received and opened important political documents while the Emperor stood waiting beside her "as a secretary". She created a wide patronage net of connections by handing out favors: she protected the career of chancellor Theodor Strattmann, and it was through her influence that the Jesuits Bauer and Tönnemann was appointed the advisers to the emperor.[2] She benefited the interests of her birth family by securing high status marriages for her sisters and benefiting the careers of her younger brothers in church and the political needs of her eldest brother, the palatine elector. She accompanied Leopold on his travels and supervised the upbringing of her children personally. She arranged the marriage of both her sons. She deeply disliked the private life of her son Joseph, scolding him for his infidelities and placing his procurers in prison.[3] 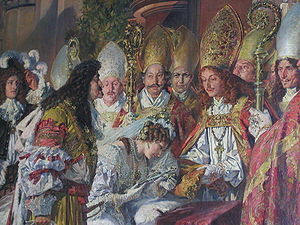 Painting depicting the 1676 marriage of Eleonor and Leopold

In 1705, Eleonor was widowed, and Leopold was succeeded by her elder son Joseph. As Empress Dowager, Eleonor was famously known for dressing in mourning for the rest of her life. During the reign of Joseph I, she endeavored to keep her political influence through her daughter-in-law, Empress Wilhelmina Amalia. When the marriage of her second son Charles was arranged, she supervised the Catholic education of his convert bride, Elisabeth Christine, and took her on a pilgrimage to Mariazell in 1706 prior to the marriage in 1707. Eleonor greatly disapproved of her son Joseph keeping an official royal mistress, Marianne Pálffy, but was powerless to stop it as she had no influence upon Joseph.

In 1711, Emperor Joseph I died, and was succeeded as ruler of the Habsburg lands by her younger son Charles, at that point absent in Spain. Eleonor was invested Regent of the Habsburg lands by the privy conference while Charles traveled to Vienna i Austria from Barcelona in Spain. As such, she was supported by her daughters. Charles had no confidence in her rule and ordered his confidant chancellor count Wratislaw to report to him about her rule, which placed him in conflict with Eleonor.[4] During her regency, she had conflicts with Count Wratislaw and Prince Eugene of Savoy. As Regent, Eleonor confiscated the gifts Joseph had given Marianne Pálffy and ordered her to marry if she did not wish to be expelled from court.[5] Further more, she fired Feldmarschall Johann Graf Pálffy von Ungarn, brother of the royal mistress of the late Emperor Joseph, Marianne Pálffy, who was at that point negotiating the peace with Hungary after the Rákóczi Rebellion.[6] His colleagues, however, circumvented her by appointing a loyalist of him as hes surrogate, and she was persuaded to restore him.[7] After negotiations was completed, she signed the Treaty of Szatmár. She also appointed Alexander Károlyi general. During her regency, there was a fear among the ministers that she would use her position to defend the rights of her brother, the palatine elector, to the Upper Palatinate in a time when the interests of Austria would be better benefited by sacrificing his lands to Bavaria, who claimed its rights to it.[8] Eleonor presided over the congress to determine the succession and election of an new Emperor, and favored the election of Charles as Emperor.

During the reign of Charles VI, Eleonor, as well as her daughter-in-law Wilhelmine Amalia, engaged herself in the succession on behalf of her daughters. Through the secret pactum mutuae successionis of 1703, Leopold I had established a succession which dictated that in the absence of a male heir, the Habsburg lands should pass to the daughters of first Joseph, then Charles, and thirdly Leopold. This was known by the three emperors and Baron Seliern: non of the empresses new for certain that the document existed, but they had heard of it, and both Wilhelmine Amalia and Eleonor were very active in establishing the truth and pressuring Charles to establish a formal and public succession order, which would also be necessary for court protocol.[9] In 1712, Wilhelmine Amalia managed to have Baron Seilern to give her the document, which she sent to the head of her family the Elector of Hanover, who sent her Leibnitz to Vienna to help her negotiate with Charles. When Charles presented the original version of the Pragmatic Sanction on 21 April 1713, Wilhelmine Amalia had triumphed in making him adjust to the secret succession order of 1703. It was at a dinner at Eleonor, in the presence of the numerous archduchesses, that Seilern informed them of this.[10]

In 1719, Charles VI, for diplomatic reasons, was forced to arrest the sister and niece of Eleonor, Hedwig Elisabeth and Clementine Sobieski, to stop the marriage between Clementine and the Jacobite pretender James III in Rome. Eleonor managed to delay the transmission of the warrant quite some time during their travel through Austrian lands before they were placed under arrest in Innsbrück. She continued to use her patronage connections to prevent Charles from marrying Clementine to some one else, such as the Duke of Modena, and eventually, Eleonor assisted Clementine to escape Austria to Italy.[11] She had a good relationship with Empress Elisabeth Christine, who nursed her on her death bed in 1720. After her death, the Jesuit Francis Wagner praised her fertility and piousness, her religious upbringing of her children and her wish to escape the world as a widow, and Johann Christian Günther described her as a paragon of virtue and faith.