Elisabeth Christine of Brunswick-Wolfenbüttel (28 August 1691 – 21 December 1750) was Princess of Brunswick-Wolfenbüttel, Holy Roman Empress, German Queen, Queen of Bohemia and Hungary; and Archduchess of Austria by her marriage to Emperor Charles VI.[1] She was renowned for her delicate beauty and also for being the mother of Empress Maria Theresa. She is also the maternal grandmother of Marie-Antoinette, Queen of France, though she died five years before her granddaughter's birth in 1755. She was also the longest serving Holy Roman Empress.[2]

Elisabeth Christine was the eldest daughter of Louis Rudolph, Duke of Brunswick-Lüneburg and his wife Princess Christine Louise of Oettingen-Oettingen.

At age 13 Elisabeth Christine became engaged to the future Charles VI, Holy Roman Emperor, through negotiations between her ambitious grandfather, Anthony Ulrich, Duke of Brunswick-Wolfenbüttel and Charles' sister-in-law, Empress Wilhelmina Amalia, whose father was John Frederick, Duke of Brunswick-Lüneburg and thus belonged to another branch of the Guelph dynasty. However, the Lutheran Protestant bride opposed the marriage at first, since it involved her switching to Roman Catholicism, but finally she gave in.[3] She was tutored in Catholicism by her mother-in-law, who introduced her to the Marian cult[4] and made a pilgrimage with her to Mariazell in 1706. On 1 May 1707, she was converted in Bamberg, Germany.[citation needed] She was forced to swear the Tridentine Creed rather than a modified version she had hoped.[4] Prior to the wedding, she was forced to undergo a medical examination to prove her fertility by a doctor and the Jesuit confessor of Charles.[5] 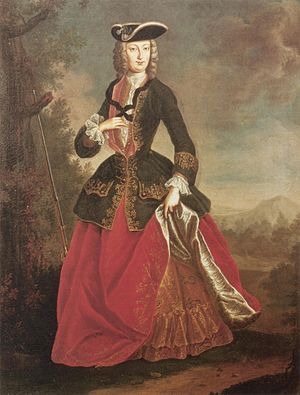 At the time of the wedding, Charles was fighting for his rights to the Spanish throne against the French-born King Philip V of Spain, so he was living in Barcelona. Elisabeth Christine arrived in Spain in July 1708 and married Charles on 1 August 1708 in the church of Santa Maria del Mar in Barcelona. As Philip V had already fathered a son, Elisabeth Christine was immediately pressured to produce a son.[5] During her time in Spain, she upheld a long-term correspondence with her mother, which was reportedly a consolation over the continuous pressure to produce a son.[5]

When her husband left for Vienna to take possession of the imperial crown in 1711, he left Elisabeth Christine behind in Barcelona appointing her as General Governor of Catalonia during his absence.[6] She wisely ruled Catalonia alone until 1713, when she had to leave Barcelona and join her husband in Vienna. Her official role as regent was to sustain the moral of the Catalan subjects of Charles, but Martino claimed that she actually governed more effectively than Charles had during his Spanish reign.[6] 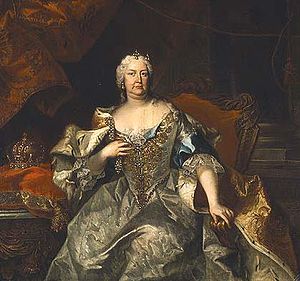 As empress, Elisabeth Christine as well as her predecessor were described as accomplished in music, discretion, modesty and diligence, and was regarded to fulfill her representational role as empress well both within the Spanish court protocol of hunting and balls and amateur theater as well as the religious devotion days of pietas austriaca.[7] She was an excellent shot and attended shooting matches, participated in hunting while she and her ladies-in-waiting dressed in amazon attire and also played billiards.[8] Elisabeth Christine was later rumored to be a crypto-Protestant, likely because she was a patron of Jansenists such as Johann Christoph Bartenstein.[4] Charles VI did not allow her any political influence what so ever after her arrival in Austria in 1713. However, she was described as intelligent and self-sufficient, and she established political connections among the ministers, especially Starhemberg, and she took some initiative to engage in politics on her own. In the 1720s, she appeared to have had some influence in the treaty with the Russian Tsar through her family connections in Northern Germany, and she allied herself with the court faction which opposed the plans to marry her daughters to members of the Spanish royal house.[9]

The marriage of Elisabeth Christine was dominated by the pressure upon her to give birth to a male heir. She reportedly found the situation very stressing and was tormented by the loss of confidence in Charles VI that this caused.[5] Three years after her marriage, court doctors prescribed large doses of liquor to make her more fertile, which gave her face a permanent blush.[5] During her 1725 pregnancy, Charles unsuccessfully had her bedchamber decorated with erotic images of male beauty so as to make her expected baby male by stimulating her fantasy.[5] After this, the court doctors prescribed a rich diet to increase her fertility, which made her so fat that she became unable to walk, experienced breathing problems, insomnia and dropsy and had to be lowered in to her chairs by a specially constructed machine.[10] Though her health was devastated by the different prescriptions as how to make her pregnant with a male issue, Charles VI apparently did care for her: he continued to refer to her by her pet name White Liz, expressed sincere concern in his diary about her health and left her an independent income in his will.[10] Charles had a mistress before the marriage, and he had a mistress, countess Althann, from 1711 onward, though Althann was not an official mistress and had been married to one of his ministers shortly before the arrival of the empress to make the relationship more discreet.[11]

In 1740, Charles VI died, leaving her a widow. As a widow, she never received the large income left to her in the will of Charles because of the crisis of the state, but her daughter Maria Theresa provided a comfortable existence for her court.[10] Though the traditional view has been that she had a good relationship with her daughter the empress, there is actually nothing to confirm such a thing. While Maria Theresa is known to freely express her affection of people she cared for, she never did so for her mother; she visited her regularly, but the visits was formal and during her interaction she behaved strictly according to Spanish court etiquette.[12] In 1747, the Prussian ambassador claimed that she was politically active: "without arousing the suspicion that she is trying to meddle"[6] in political matters. Elisabeth Christine died in Vienna. 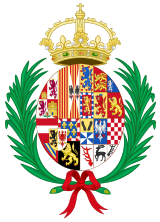 Coat of arms as consort of the Pretender to the Spanish Throne.