Elisabeth of Valois (Spanish: Isabel; 2 April 1545 – 3 October 1568) was a Spanish queen consort. The eldest daughter of Henry II of France and Catherine de' Medici, she married Philip II of Spain as his third wife.

She was born in the Château de Fontainebleau. Her childhood was spent in the French royal nursery, where her father insisted she share her bedroom with her future sister-in-law, Mary, Queen of Scots, who was about the same age. Even though Elisabeth had to give precedence to Mary (since Mary was already a crowned queen), the two would remain close friends for the rest of their lives. While it is acknowledged that her sister Margaret and her future sister-in-law Mary were prettier than she, she was one of Catherine's attractive daughters. Elisabeth was also described as being shy, timid and very much in awe of her formidable mother; although there is also evidence that Catherine was tender and loving toward Elisabeth. This was certainly evident in her letters to Elisabeth. 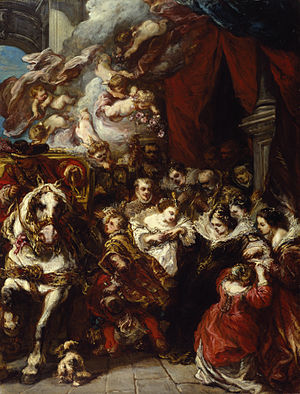 This painting by Eugène Isabey depicts Elisabeth, dressed more like a widow than a bride, swooning as she is led to the carriage that will bear her away from France to marry King Philip II of Spain.[1] The Walters Art Museum.

Elisabeth married Philip II of Spain son of Charles V, Holy Roman Emperor, and Isabella of Portugal in 1559. Originally married via proxy at Notre Dame (with the Duke of Alba standing in for Philip) prior to leaving France, the actual ceremony took place in Guadalajara, Spain, upon her arrival. The marriage was a result of the Peace of Cateau Cambrésis (1559). His second wife, Mary I of England, had recently died, making Elisabeth of Valois Philip's third wife.

At her wedding she met the famous painter Sofonisba Anguissola and Ana de Mendoza, who would live with her the rest of her life.[2] Elisabeth had been an amateur painter before, but Anguissola helped her improve her technique further.

Philip was completely enchanted by his 14-year-old bride, and within a short period of time had given up his mistress, an unnamed woman of the court, with whom he had an illegitimate child named Maria Luisa de Borbon who later was married to the 6th Duke of Arcos. Despite the significant age difference, Elisabeth was also quite pleased with her husband. (In letters to her mother, she proclaimed herself to be fortunate to have married so charming a prince.) Philip enjoyed hosting chivalric tournaments to entertain his wife. Elisabeth would play liege lady to the three young princes of the Spanish Court: Carlos, Prince of Asturias, John of Austria (illegitimate son of Charles V), and Alexander Farnese, Duke of Parma (son of Charles V's illegitimate daughter Margaret).

Elisabeth had originally been betrothed to Philip's son, Carlos, Prince of Asturias, but political complications unexpectedly necessitated instead a marriage to Philip. Her relationship with her troubled stepson Carlos was warm and friendly. Despite reports of his progressively bizarre behavior, Carlos was always kind and gentle to Elisabeth. When it eventually became necessary for Philip to lock him away (which shortly led to the Prince’s demise), Elisabeth cried for days.[citation needed]

Philip was very attached to Elisabeth, staying close by her side even when she was ill with smallpox. Elisabeth's first pregnancy in 1564 ended with a miscarriage of twin girls. She later gave birth to Infanta Isabella Clara Eugenia of Spain on 12 August 1566, and then to Isabella's younger sister Catherine Michelle of Spain on 10 October 1567. Elisabeth had another miscarriage on 3 October 1568, and died the same day, along with her newborn infant daughter.

After the death of Elisabeth, Catherine de' Medici offered her younger daughter Margaret as a bride for Philip. Philip declined the offer because he thought it was against Biblical and Canon Law to marry the sister of a deceased wife. He was described as absolutely heartbroken at the loss of his wife, as he had loved her deeply. He mourned for almost a year before even considering a new bride. 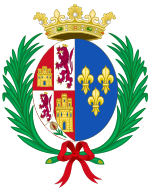 Coat of arms of Elisabeth of France, Queen of Spain.

Elisabeth of Valois is a central character in Thomas Otway's play Don Carlos, in Schiller's play of the same name, and in Verdi's opera adapted from Schiller's play, also titled Don Carlos. All these works imply a tragic romance between Elisabeth and Carlos, suggesting that they were really in love with each other when Elisabeth was forced to break off her engagement to Carlos and marry his father Philip.

Elisabeth of Valois' marriage to Philip II is the occasion for the wedding games at which Henry II dies in Madame de Lafayette's novella The Princesse de Cleves. Her role is brief but it substantially affects the novella's narrative arc.