From Infogalactic: the planetary knowledge core
Jump to: navigation, search
For the tower complex under construction in Dubai, see Elite Towers.

The Elite Tower is a site in Ramat Gan, Israel, in which various skyscrapers have been planned, but as of March 2015, construction has been cancelled due to delays in the permitting process.[1] At 265 metres upon completion, the tower would have been the tallest building in Israel, taking the title from its neighbour, City Gate Tower.

The site was originally purchased by Donald Trump for $44 million,[2] where he planned to build the Trump Plaza Tower, the project was later purchased by the Azorim Group and was to be constructed on the historic site of the Elite Candy Factory. 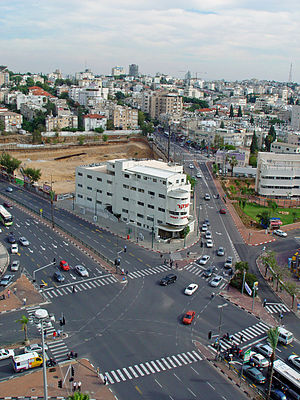 Originally, the Elite Tower site was purchased for $44 million by American real estate tycoon Donald Trump[2] in association with Crescent Heights Investments. He planned to build the Trump Plaza Tower, but Trump shelved the plans in 2007, when he sold the site on to Azorim for NIS 306.5 million (around $80 million).[3][4]

On 3 April 2014, it was announced that the tower would have a height of 265 metres with a total of 65 stories, and would be accompanied by a 25-story office tower on the same site. The all-residential tower would contain 338 residential units. On the 65th floor, the architect confirmed there would be a viewing room as well as a cafe. Construction was expected to begin sometime in 2014 and be completed by 2017.[5]

In early March 2015, purchasers of units in the tower announced that "construction of the tower was canceled, due to a delay in obtaining a permit."[1]