Eliza Courtney (20 February 1792 – 2 May 1859) was the illegitimate daughter of the Whig politician and future Prime Minister Charles Grey, 2nd Earl Grey and the society beauty Georgiana, Duchess of Devonshire, while Georgiana was married to William Cavendish, 5th Duke of Devonshire.

The Duchess was forced by her husband to relinquish Eliza shortly after her birth, to be raised by Charles Grey's parents, Charles Grey, 1st Earl Grey and Elizabeth Grey, Countess Grey. The Duchess came to visit Eliza in secret. Eliza named her firstborn daughter Georgiana.

The name Courtney, extinct since the death of Charles Kelland Courtney in 1761, was derived from her great-uncle, her maternal grandmother's brother, William Poyntz (d.1809), having married Isabella (d.1805), sister and co-heiress of the aforementioned Charles Courtney, the last of the west country family of Courtney of Trethurfe and Courtney of Tremeer. 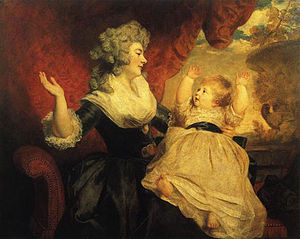 Her mother with an elder sibling 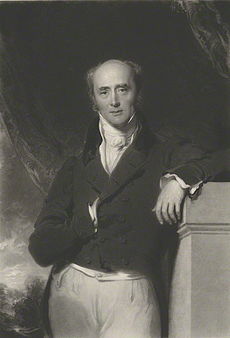 Eliza Courtney was born in France, in Aix-en-Provence on 20 February 1792. She was brought to Falloden, Northumberland in northern England and adopted by her paternal grandparents. Unlike her mother's legitimate children from her marriage, Eliza was not raised as part of the Devonshire House set in London. Her mother, Georgiana, could not acknowledge her daughter and visited her in secret until her own death. Several anguish-ridden poems from mother to daughter survive; two are reproduced below:

And yet remote from public view flower there is of timid hue,
Beneath a sacred shade it grows,
But sweet in native fragrance blows.
From storms secure, from tempests free,
But ah! too seldom seen by me.
For scarce permitted to behold
With longing eyes each grace unfold.

My bosom struggles with its pain
And checks the wishes form'd in vain;
Yet when I perchance supremely blest,
I hold the floweret to my breast,
Enraptur'd watch its purple glow
And blessings (all I have) bestow.
The gentle fragrance soothes my care
And fervent is my humble prayer
That no dread evil may beset
My sweet but hidden violet.[1]

Unhappy child of indiscretion,
poor slumberer on a breast forlorn
pledge of reproof of past transgression
Dear tho' unfortunate to be born

Meanwhile in these sequested vallies
Here may'st thou live in safe content
For innocence may smile at malice
And thou-Oh ! Thou art innocent[2]

Georgiana was allowed to see her daughter occasionally when the Greys brought Eliza to London, and acted as a sort of unofficial godmother.

In 1808, her maternal aunt Henrietta Ponsonby, Countess of Bessborough, who didn't know she was Eliza's aunt, visited the Greys and was dismayed at what she observed:

Eliza is a fine girl, and will, I think, be handsome; but tho' they are kind to her, it goes to my heart to see her—she is so evidently thrown into the background, and has such a look of mortification about her that it is not pleasant, yet he [Charles Grey] seems very fond of her. Lord B. [Harriet's husband] has this moment ask'd me whether she is not the Governess.

Eliza was not informed of her true parentage until after the death of Georgiana Cavendish, Duchess of Devonshire.

In March 1814, Lord Broughton recorded meeting Eliza at dinner and described her as:

the daughter of the late Duchess of Devonshire by Lord Grey, … a fine girl, sensible and talkative, and easy mannered.

Ellice was acting Governor-General of Malta for five-and-a-half months, from 13 May to 27 October 1851.

In the 1856 Webster's, he is listed as having a residence at 57 Park Street, Mayfair.

Eliza Courtney, Mrs Ellice, is thought to have had three daughters and two sons.

Her daughter Georgiana was born on 12 October 1817. On 4 November 1846, Georgiana Ellice married Hugh Horatio Seymour (1821–1892). Seymour was the son of Lt. Col. Hugh Henry Seymour (1790–1821), himself son of Admiral Lord Hugh Seymour (1759–1801), who was the fifth son of the first Marquess of Hertford by his marriage to Charlotte Cholmondeley, daughter of the first Marquess of Cholmondeley. A younger brother of Col. Hugh Seymour was Colonel Sir Horace Seymour (1791–1851), an ancestor of Diana, Princess of Wales. His grandson was Sir Horace James Seymour GCMG CVO (1885–1978), a diplomat who was British Minister in Tehran from 1936 to 1939 and British Ambassador to China, 1942 to 1946. One of Sir Horace's grandsons, James Seymour (born 1956) is married to Anya Hindmarch.

Eliza had another daughter, also named Eliza, the following year, in 1818. This Eliza married Henry Bouverie William Brand (1814–1892) in 1838. After a distinguished speakership of the House of Commons, Eliza's husband was created Viscount Hampden; later still he inherited from his brother the Barony of Dacre, as 23rd in line. Descendants include the present Lord Monk Bretton; Sarah, Duchess of York; and Viscount Hampden. Eliza Ellice Brand died on 8 March 1899 at Pelham House, Lewes.

In April 1889 Major Edward Charles Ellice married another first cousin once removed, Margaret Georgiana Freeman Thomas (died 1929), daughter of Frederick Freeman Thomas by his wife Mabel Brand, daughter of the 1st Viscount Hampden. Like him Margaret Georgiana was a descendant of Eliza Courtney, through Eliza's second daughter Eliza. Her brother was Freeman Freeman-Thomas, Viceroy of India and was created 1st Marquess of Willingdon.

Eliza's second son, Charles Henry, was born in 1823 in Florence. Charles followed his father into the 24th Regiment of Foot and was sometime Quartermaster-General and then Adjutant-General to the Forces. He married Louisa Caroline Lambton, a daughter of William Henry Lambton and niece of the 1st Earl of Durham. Thom's Upper Ten Thousand for 1876 lists him as of Horningsheath, Bury St Edmunds. He was subject of Vanity Fair treatment, 20 October 1877. Lt. Gen. Sir Charles Henry Ellice, KCB died in 1888.

Eliza died a widow in Norwood, Surrey, aged 67. "Norwood in Surrey" in this case is Upper Norwood; South Norwood; West Norwood; or Sydenham.

Eliza Courtney's descendants include Sarah, Duchess of York and her daughters Princesses Beatrice and Eugenie of York, who are seventh[4] and eighth[5] in line to the British throne, respectively. She is also related to Diana, Princess of Wales and her sons Prince William, Duke of Cambridge and Prince Harry of Wales, who are the second and fifth in line to the British throne, respectively.