Elizabeth is a 1998 biographical film written by Michael Hirst, directed by Shekhar Kapur, and starring Cate Blanchett in the title role of Queen Elizabeth I of England, alongside Geoffrey Rush, Christopher Eccleston, Joseph Fiennes, Sir John Gielgud, Fanny Ardant and Richard Attenborough. This 1998 film is loosely based on the early years of Elizabeth's reign. In 2007, Blanchett and Rush reprised their roles in the sequel, Elizabeth: The Golden Age, covering the later part of her reign.

The film brought Australian actress Blanchett to international attention. She won several awards for her portrayal of Elizabeth, notably a BAFTA and a Golden Globe in 1998, while the film was also named the 1998 BAFTA Award for Best British Film. Elizabeth was nominated in 7 categories in the 71st Academy Awards, including Best Picture and Best Actress, receiving the prize for Best Makeup.

The film sees a young Elizabeth elevated to the throne on the death of her half-sister Mary I, who had imprisoned her. Her reign over the divided and bankrupt realm is perceived as weak and under threat of invasion by Early Modern France or Habsburg Spain. For the future stability and security of the crown she is urged by advisor William Cecil (Attenborough) to marry, and has suitors in the Catholic Philip II of Spain and the French Henri, Duc d'Anjou. She instead embarks on an affair with the wholly unsuitable Robert Dudley (Fiennes).

Elizabeth must counter threats from within such as the powerful 4th Duke of Norfolk (Eccleston), and from the armies of Mary of Guise (Ardant) garrisoned in Scotland. She also faces plots from Rome directed by Pope Pius V (Gielgud). Assisted by her "spymaster" Francis Walsingham (Rush), she puts down the threats both internal and external, ruthlessly executing the plotters. Elizabeth eventually ends her affair and resolves to marry nobody except England. The film ends with Elizabeth assuming the persona of the "Virgin Queen," and saying: "I am married to England," initiating England's Golden Age.

In 1558, Queen Mary (Kathy Burke), the Catholic daughter of King Henry VIII and Catherine of Aragon, dies of a cancerous tumour in her uterus. Mary's Protestant half-sister, Elizabeth (Cate Blanchett), whom Henry fathered with Anne Boleyn, becomes Queen of England. Elizabeth had previously been jailed for a supposed conspiracy to murder Mary but has been freed for her coronation. Elizabeth is being courted by several suitors, including Henry, Duc d'Anjou (Vincent Cassel), whom she rejects, but is urged by William Cecil, 1st Baron Burghley (Richard Attenborough) to marry, which would secure her throne.

However, she has a secret affair with Robert Dudley, Earl of Leicester instead. The affair is, however, no secret from Cecil, who makes it clear that a monarch has no private life. Elizabeth deals with various threats to her reign, including Thomas Howard, 4th Duke of Norfolk (Christopher Eccleston) who seeks to legitimize his claim by marrying her Catholic cousin, Mary, Queen of Scots and Mary's mother, Mary of Guise (Fanny Ardant), who brings French troops into Scotland to attack Elizabeth's forces when they invade. Elizabeth permanently banishes Dudley from her private presence when she finds out from Cecil that he is married. Elizabeth feels that such relations could give a man too much power over her.

Moreover, cutting off her relations with Dudley is part of the process by which she becomes increasingly tough and assertive, as she carefully prepared and rehearsed the speech she delivered to a recalcitrant Parliament and force through her religious reforms, the Act of Uniformity. She also becomes capable of occasional ruthless behavior as in unflinchingly ordering the execution of those whom she considers dangerous to her rule. After Elizabeth's adviser Francis Walsingham (Geoffrey Rush) discovers Norfolk and the Spanish ambassador De La Quadra (James Frain) plotting with King Philip, she orders their arrest and execution.

Mary of Guise is assassinated by Walsingham, who acted on unofficial orders from Elizabeth. All this is a considerable change from the warm-hearted, rather romantic girl that Elizabeth was earlier; remaining such would have been incompatible with being a Queen who ruled and dominated the men around her. Elizabeth has her face painted white and her hair cut by Kat Ashley (Emily Mortimer), assuming the persona of the "Virgin Queen." Elizabeth declares she is married to England just before walking down the aisle to sit on her throne.

The costuming and shot composition of the coronation scene is based on Elizabeth's coronation portrait. 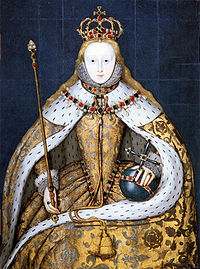 This portrait "The Coronation of Elizabeth" was used as the basis for the photography and costume of Cate Blanchett during the coronation scene in the film. This is a copy of a now lost original, this copy attrib. Nicholas Hilliard

Cate Blanchett was chosen to play Elizabeth after Kapur saw a trailer of Oscar and Lucinda.[1] According to the director's commentary, Kapur mentioned that the role of the Pope (played by Sir John Gielgud) was originally offered to, and accepted by, Marlon Brando. However, plans changed when Kapur noted that many on set would probably be concerned that Brando would be sharing the set with them for two days. Later, when Gielgud had taken the role, Kapur at one point suggested (in vain) that the Pope's accent should be Italian; he added that every British actor within earshot was horrified that any director was asking Sir John Gielgud to speak in an accent that "wasn't John Gielgud."[citation needed]

A large proportion of the indoor filming, representing the royal palace, was conducted in various corners of Durham Cathedral—its unique nave pillars are clearly identifiable as such.[citation needed]

The film was received well by critics and the public, it holds an 81% "fresh" rating on film aggregate website Rotten Tomatoes based on 59 film critic reviews. The site's consensus was: "No mere historical drama, Elizabeth is a rich, suspenseful journey into the heart of British Royal politics, and features a typically outstanding performance from Cate Blanchett."[2]

The Catholic League for Religious and Civil Rights accused the film of anti-Catholicism, stating that the film gives the "impression that the religious strife was all the doing of the Catholic Church," noting that the review in The New York Times considered it "resolutely anti-Catholic" complete with a "scheming pope" and repeating the charge made in the Buffalo News that "every single Catholic in the film is dark, cruel and devious."[4]