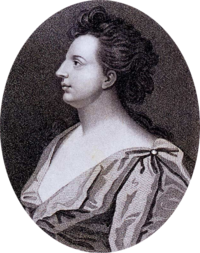 Elizabeth Barry changed "like Nature which she represents, from Passion to Passion, from Extream to Extream, with piercing Force and with easy Grace".

Elizabeth Barry (1658 – 7 November 1713) was an English actress of the Restoration period.

She worked in big, prestigious London theatre companies throughout her successful career: from 1675 in the Duke's Company, 1682 – 1695 in the monopoly United Company, and from 1695 onwards as a member of the actors' cooperative usually known as Betterton's Company, of which she was one of the original shareholders. Her stage career began 15 years after the first-ever professional actresses had replaced Shakespeare's boy heroines on the London stage.

The actor Thomas Betterton said that her acting gave "success to plays that would disgust the most patient reader", and the critic and playwright John Dennis described her as "that incomparable Actress changing like Nature which she represents, from Passion to Passion, from Extream to Extream, with piercing Force and with easy Grace".

A frequently repeated anecdote holds that the 17-year-old Barry at first performed so unskillfully that she was fired from the company several times, but was transformed into a brilliant actress by the coaching of her lover, John Wilmot, 2nd Earl of Rochester. While multiple sources confirm that Rochester was Barry's lover, the only source for the coaching story is a Life of Barry published in 1740 – 65 years after the events – by Edmund Curll, well known for his fanciful and inaccurate biographies.

Barry was a successful comedian who created a variety of Restoration comedy heroines throughout her career, but her greatest impact on Restoration drama was as a tragic actress. Her capacity for projecting pathos was an inspiration to playwrights Thomas Otway and Thomas Southerne in the three famous tragic roles they wrote for her: Monimia in Otway's The Orphan (1680), Belvidera in Otway's Venice Preserved (1682), and Isabella in Southerne's The Fatal Marriage (1694). These three roles, wrote the prompter John Downes, "gain'd her the Name of Famous Mrs. Barry, both at Court and City, for when ever She Acted any of these three Parts, she forc'd Tears from the Eyes of her Auditory, especially those who have any Sense of Pity for the Distress't." 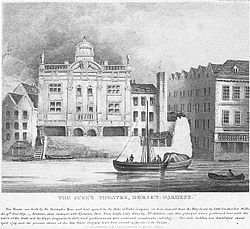 During the first part of her career, Barry worked at the Duke's Theatre at Dorset Gardens, on the riverfront, London's most luxurious playhouse.

In his autobiography many years later, Colley Cibber recalled the power of her voice: "When distress of Tenderness possess'd her, she subsided into the most affecting Melody and Softness. In the Art of exciting Pity, she had a Power beyond all the Actresses I have yet seen, or what your Imagination can conceive." Elizabeth Howe has argued that it was Barry's success in the role of Monimia that "clinched the movement away from heroic drama and started the establishment of 'she-tragedy' as a popular genre." Barry was always described as being a plain woman. Portraits suggest intelligence but heavy features, and the playwright Thomas Shadwell writes in a letter in 1692 that it would have been better to have staged Nicholas Brady's The Rape in Roman dress, "and then w'th a Mantle to have covered her hips Mrs Barry would have acted ye part." Apparently none of this mattered to contemporaries. Even though Barry was "the ugliest Woman" in the world off stage, wrote the anonymous A Comparison Between the Two Stages (1702), she was "the finest Woman in the World upon the Stage."

Barry worked for the Duke's Company from 1675 to 1682, taking the role of Cordelia opposite Thomas Betterton's Lear in Nahum Tate's 1681 adaptation of Shakespeare's King Lear. After the Duke's and the King's companies were amalgamated in 1682, she continued as one of the star performers of the new United Company, which remained for 12 years the only theatrical company in London. The absence of rival companies left the actors in a weak bargaining position in relation to management, and when the United Company fell under the mismanagement of Christopher Rich (theatre manager) in the 1690s, "as sly a Tyrant as ever was at the Head of a Theatre," the senior actors including Barry, Betterton and Anne Bracegirdle left to form their own collaborative company. Barry was one of the original patent-holders of the actors' company, which opened at Lincoln's Inn Fields with the smash hit of William Congreve's Love For Love in 1695 and continued to successfully challenge Rich's United Company.

Barry achieved remarkable public approval and business success for a single woman in London in the late 17th century, especially considering that she was generally known to have a daughter by Rochester and another by the playwright George Etherege. Many actresses at this time achieved the prize of respectability by being married, usually to actors, but Barry never married. In 1709 she retired from the stage.

Barry is a supporting character in The Libertine, Stephen Jeffrys' play about John Wilmot's life, as well as its 2004 film adaptation, in which she is portrayed by Samantha Morton. Barry also appears as a character in the 2015 play [exit Mrs Behn] or, The Leo Play by Christopher vanDer Ark.