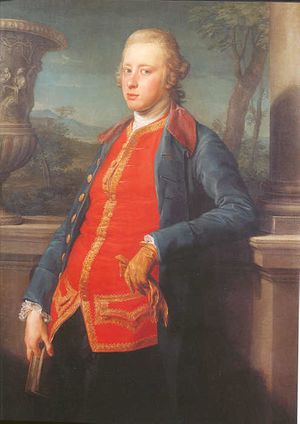 Elizabeth Foster's second husband, with whom she lived from 1782 on: William Cavendish, 5th Duke of Devonshire

Known as Bess, she was born Elizabeth Christiana Hervey in a small house in Horringer, St Edmundsbury, Suffolk. Her father, Frederick Hervey, later became the fourth Earl of Bristol.

When her father succeeded as the earl in 1779, she became Lady Elizabeth Foster. The couple resided after 1779 with her parents at Ickworth House in Suffolk. The marriage was not a success, and the couple separated within five years, plausibly after Foster had a relationship with a servant. Foster retained custody of their sons and did not allow the boys to see Bess for 14 years.

In May 1782, Bess met the Duke and Duchess of Devonshire in Bath, and quickly became Georgiana's closest friend. From this time, she lived in a triad with Georgiana and her husband, William, the 5th Duke of Devonshire, for about 25 years. She bore two illegitimate children by the Duke: a daughter, Caroline St Jules, and a son, Augustus (later Augustus Clifford, 1st Baronet), who were raised at Devonshire House with the Duke's legitimate children by Georgiana. Georgiana grew ill and died in 1806; three years later, Bess married the duke and became the Duchess of Devonshire. He died two years later.

Bess is also said to have had affairs with several other men, including Cardinal Ercole Consalvi, John Sackville, 3rd Duke of Dorset, Count Axel von Fersen, Charles Lennox, 3rd Duke of Richmond, and Valentine Quin, 1st Earl of Dunraven and Mount-Earl. There is some evidence that Quin fathered an illegitimate son by her, who became the noted physician Frederic Hervey Foster Quin.[citation needed] Quin joined the Duchess as her travelling physician in Rome in December 1820, and afterwards attended her in that city during her fatal illness in March 1824.[2]

Lady Elizabeth was a friend of the French author Madame de Staël, with whom she corresponded from about 1804.

Lady Elizabeth Foster was depicted by Hayley Atwell in the 2008 film The Duchess.[3]

With William Cavendish, 5th Duke of Devonshire (prior to their marriage):

Vere Foster (1819–1900), her grandson, was a renowned Irish philanthropist and educationalist.