Princess Palatine Elisabeth Charlotte[1] (German: Pfalzprinzessin Elisabeth Charlotte; 27 May 1652 – 8 December 1722) was a German princess and, as Madame, the wife of Philippe I, Duke of Orléans, younger brother of Louis XIV of France, and mother of France's ruler during the Regency. Louis invoked her hereditary claim to the Palatinate as pretext to launch the Nine Years' War in 1688. Her vast, frank correspondence provides a detailed account of the personalities and activities at the court of her brother-in-law, Louis XIV for half a century, from the date of her marriage in 1672.

Princess Elisabeth Charlotte was born on 27 May 1652 in Heidelberg Castle, to Charles I Louis, Elector Palatine of the Simmern branch of the House of Wittelsbach, and Landgravine Charlotte of Hesse-Kassel.[2] Her grandmother Elizabeth of Bohemia was a Scottish and later English princess, daughter of James I of England and granddaughter of Mary, Queen of Scots. Her first cousin became George I, the first Hanover King of England. In childhood she became known as Liselotte—a portmanteau of her names. Her parents were in an unhappy dynastic marriage and in 1653 her father began an affair with Marie Luise von Degenfeld, one of his wife's attendants. He purported to marry her motu proprio as a prince-elector of the Empire, without benefit of a judicial divorce, and claimed to have done so to legitimise the bastard children. Liselotte was five years old when she was sent to live with her father's sister, Sophia, wife of Ernest Augustus, Elector of Hanover.[2]

She always remembered her time with her aunt as the happiest of her life, although she became close enough to her younger half-sisters to correspond with them at least weekly after she married. In 1663, Liselotte had to move back to Heidelberg where she lived with her stepmother, fifteen half-siblings, and brother, the future Charles II, Elector Palatine. She had purportedly desired to marry her cousin William III of Orange, who would later become King of England, though her family believed that sacrifices needed to be made in order to make a more beneficial marriage with the recently widowed brother of the King of France, formerly married to her father's first cousin, Princess Henrietta Anne of England.[2] 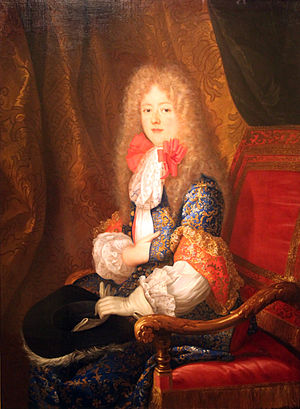 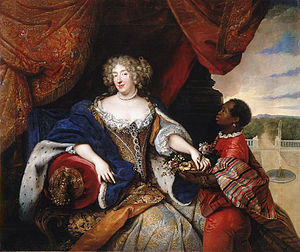 On 16 November 1671, she was married by proxy at Metz to Philippe I, Duke of Orléans. By prearrangement, after leaving her father's realm but prior to arriving in France, she formally converted to Roman Catholicism.[1] The arranged marriage was conceived by the bride's aunt, Anna Gonzaga, a close friend of her future husband and his deceased first wife, who negotiated the marriage contract, including the secret Catholic instruction and subsequent public conversion of the fiancée.[1] At the French court, her husband Philippe was known by the traditional honorific of Monsieur.

Elisabeth Charlotte objected to money spent on his favourites and the exercise of their influence with him to enrich themselves.[3] She said on the subject:

I could put up with it if Monsieur only squandered his money in gaming, but sometimes he gives away as much as 100,000 francs at one swoop, and all the economies fall upon me and the children. That is not at all pleasant, besides putting me in a position where, as God is my witness, we would have to live entirely on the King's charity, which is a miserable thing.[4]

Elisabeth Charlotte had apartments at Versailles, use of the Palais-Royal in Paris, and her favourite residence, the beautiful Château de Saint-Cloud on the outskirts of Paris, which was the couple's main residence when not at the Palace of Versailles. Liselotte also had an apartment at the King's private residence, the Château de Marly. In her dowager years she would stay at the Grand Trianon built by her brother-in-law. The marriage at first proved to be happy, with the birth of two male heirs. The couple had three children. After the death of the couple's first son, the Duke of Valois, she experienced depression and worried about her third pregnancy (with Élisabeth Charlotte d'Orléans). After this birth, the relationship between husband and wife was never as close as it had been. After the birth of their daughter Élisabeth Charlotte, the couple mutually agreed to cease conjugal relations. Philippe turned to his minions, and Elisabeth Charlotte to writing.[2]

Her letters to her aunt, Sophia of Hanover, and others, created not only a vivid picture of life during the reign of Louis XIV, but also of the Regency era of her son, Philippe. They reflect her alienation from her husband and other family members, as well as her warm relations with the king, and with her son, daughter and her two stepdaughters.[citation needed]

As the king's only brother and sister-in-law, the couple were expected to be in usual attendance at court, where her husband's rank as a fils de France ensured her precedence before all save the queen, the wives of the king's son and grandsons—and his maîtresse-en-titre. This last position rankled her, and she disliked the king's illegitimate children, especially Louis-Auguste, Duke of Maine.[citation needed]

Madame de Montespan's youngest daughter, Françoise Marie de Bourbon, would eventually marry her son. No inducements ever reconciled Elisabeth Charlotte to the marriage. When she discovered that her son had agreed to it at the king's insistence, she slapped his face in front of the whole court, and turned her back on the king as he greeted her with a bow. Later, writing on the subject she admitted:

If, by shedding my own blood, I could have prevented my son's marriage, I would willingly have done so; but since the thing was done, I have had no other wish than to preserve harmony.[4]

In addition to letters to her aunt Sophia and her morganatic half-sisters the Raugravines, she also corresponded with the former's courtier Gottfried Leibniz, although they never met. After he died, she insisted that the Académie des Sciences, of which he had been a member, honour his passing. The resulting eulogy to Leibniz, by Fontenelle, was the only one ever delivered anywhere. When the Simmern branch of the Wittelsbach dynasty became extinct in the male line with the death of her brother Karl II in 1685, Louis XIV sent troops to claim the Palatinate in his sister-in-law's name, initiating the War of the Palatine Succession (1688–1697), which would decimate much of the Rhineland.[1] 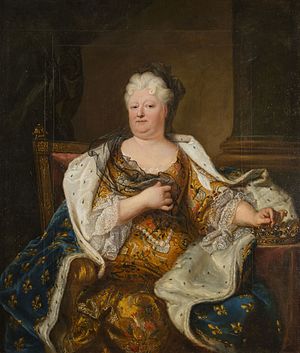 On 9 June 1701 her husband, just under sixty years old, died of a stroke at the château de Saint-Cloud. Earlier, he had a heated argument with his brother at the Château de Marly about the conduct of his son—who was also the king's son-in-law. After her husband's death, Elisabeth Charlotte feared that the king would send her to a convent, as stipulated in her marriage contract. Instead she was confronted with secretly-made excerpts of her all-too-candid letters to correspondents abroad. She was warned to change her attitude toward Madame de Maintenon.[citation needed]

She remained welcome at court. She was allowed to keep her apartments at all the royal residences and retained her rank. From her husband, she inherited 40,000 livres a year. Louis XIV added 250,000 livres, and her son promised her another 200,000.[5]

Some time after Philippe's death, she wrote:

If those who are in the next world could know what was happening in this one, I think His Grace, the late Monsieur, would be most pleased with me, for I have gone through his boxes to find all the letters written to him by his boyfriends and have burnt them unread, so that they will not fall into other people's hands... then ...I receive great comfort from the King, otherwise I could not endure my position. When the King speaks about Monsieur he is quite moved.[4]

In 1715, Louis XIV died aged seventy-seven at the Palace of Versailles. In his will, he divided the regnal prerogatives among relatives and courtiers, allocating to his legitimised son, the Duke of Maine, guardianship of the new king, Louis XV, who was five years old. The Parlement of Paris overturned the will's provisions at the request of Elisabeth Charlotte's son, who thus became regent. In her memoirs, Elisabeth Charlotte describes the new era of the Regency. Although no longer outranked by any woman at court and freed from the imagined persecutions of Madame de Maintenon, she did not cease daily complaints to her correspondents about the antics of what she regarded as an increasingly decadent court, about which she wrote:

I believe that the histories that will be written about this court after we are gone will be better and more entertaining than any novel, and I am afraid that those who come after us will not be able to believe them and think they are just fairy tales.[4]

Elisabeth Charlotte died at age 70 on 8 December 1722, at the château de Saint-Cloud, near Paris. She and her husband, the Duke of Orléans, were the founders of the modern House of Orléans. Their only surviving son, Philippe II, Duke of Orléans, was the Regent of France during the minority of Louis XV of France. She became the ancestress of emperors Holy Roman Emperor Francis I, Emperor Pedro II of Brazil, and France's Citizen-King Louis Philippe.[citation needed]

Elisabeth Charlotte was described as stolid and mannish. She possessed the stamina to hunt all day, refusing to wear the mask that Frenchwomen were accustomed to use to protect their skin while watching their men hunt. Her face developed a ruddy and weather-beaten look. She walked too rapidly for most courtiers to keep up, save the king. She had a "no-nonsense" attitude. Her hearty appetite caused her to gain weight as the years went by, and when describing herself she once commented that she would be as good to eat as a roasted suckling pig. Raised a Protestant, she was not fond of lengthy Latin masses. She remained virtuous and at times outraged by the open infidelity practiced by the aristocracy. Her views were frequently the opposite of those prevalent at the French court.[2]

She is known by different names and styles in different languages with:

The dynastic titles to which she was entitled were Countess Palatine of the Rhine at Simmern and Duchess of Bavaria. At the royal court of France she was known, prior to marriage, as the Princess Palatine Elisabeth Charlotte, and afterwards, although her official title was "Her Royal Highness, Madame, Duchess of Orléans", she was entitled to and invariably accorded the unique designation of Madame as wife of the king's younger brother.[1]

She was played by Renate Müller in the 1935 German film The Private Life of Louis XIV, and Paula Paul in the 2014 British film A Little Chaos.