Elizabeth (Betsy) Fry (21 May 1780 – 12 October 1845), née Gurney, was an English prison reformer, social reformer and, as a Quaker, a Christian philanthropist. She has sometimes been referred to as the "angel of prisons".

Fry was a major driving force behind new legislation to make the treatment of prisoners more humane, and she was supported in her efforts by the reigning monarch. Since 2001, she has been depicted on the Bank of England £5 note.

Elizabeth (Betsy) Gurney was born in Gurney Court, off Magdalen Street, Norwich, Norfolk, England into a prominent Quaker family, the Gurneys. Her childhood family home was Earlham Hall which is now part of the University of East Anglia.[1] Her father, John Gurney (1749–1809), was a partner in Gurney's Bank. Her mother, Catherine, was a member of the Barclay family who were among the founders of Barclays Bank. Her mother died when Elizabeth was twelve years old. As one of the oldest girls in the family, Elizabeth was partly responsible for the care and education of the younger children, including her brother Joseph John Gurney, a philanthropist. One of her sisters was Louisa Gurney Hoare (1784–1836), a writer on education. 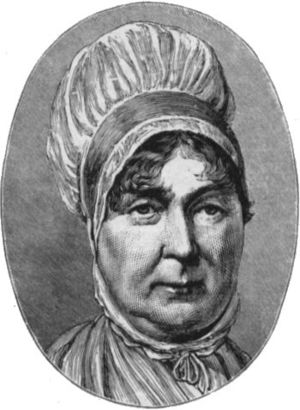 At the age of 18, Elizabeth was deeply moved by the preaching of William Savery, an American Quaker. Motivated by his words, she took an interest in the poor, the sick and prisoners. She collected old clothes for the poor, visited the sick in her neighbourhood and started a Sunday school in the summer house to teach children to read.

She met Joseph Fry (1777–1861), a banker who was also a Quaker, when she was 20 years old. They married on 19 August 1800 at the Norwich Goat Lane Friends Meeting House and moved to St Mildred's Court in the City of London. Elizabeth Fry was recorded as a minister of the Religious Society of Friends in 1811.

Joseph and Elizabeth Fry lived in Plashet House in East Ham between 1809 and 1829 when they moved to Upton Lane in Forest Gate. They had eleven children, five sons and six daughters: 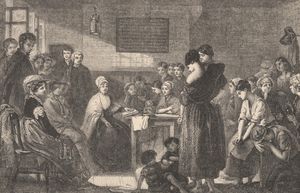 Prompted by a family friend, Stephen Grellet, Fry visited Newgate Prison. The conditions she saw there horrified her. The women's section was overcrowded with women and children, some of whom had not even received a trial. The prisoners did their own cooking and washing in the small cells in which they slept on straw.

She returned the following day with food and clothes for some prisoners. She was unable to further her work for nearly four years because of difficulties within the Fry family, including financial difficulties in the Fry bank. Fry returned in 1816 and was eventually able to found a prison school for the children who were imprisoned with their mothers. She began a system of supervision and required the women to sew and to read the Bible. In 1817 she helped found the Association for the Reformation of the Female Prisoners in Newgate. This led to the eventual creation of the British Ladies' Society for Promoting the Reformation of Female Prisoners, widely described by biographers and historians as constituting the first "nationwide" women's organisation in Britain.

Elizabeth Fry wrote in her book Prisons in Scotland and the North of England that she stayed the night in some of the prisons and invited nobility to come and stay and see for themselves the conditions prisoners lived in. Her kindness helped her gain the friendship of the prisoners and they began to try to improve their conditions for themselves. Thomas Fowell Buxton, Fry's brother-in-law, was elected to Parliament for Weymouth and began to promote her work among his fellow MPs. In 1818 Fry gave evidence to a House of Commons committee on the conditions prevalent in British prisons, becoming the first woman to present evidence in Parliament.

Elizabeth Fry also helped the homeless, establishing a "nightly shelter" in London after seeing the body of a young boy in the winter of 1819/1820. In 1824, during a visit to Brighton, she instituted the Brighton District Visiting Society. The society arranged for volunteers to visit the homes of the poor and provide help and comfort to them. The plan was successful and was duplicated in other districts and towns across Britain.

After her husband went bankrupt in 1828, Fry's brother became her business manager and benefactor. Thanks to him, her work went on and expanded.

In 1840 Fry opened a training school for nurses. Her programme inspired Florence Nightingale, who took a team of Fry's nurses to assist wounded soldiers in the Crimean War.

In 1842, Frederick William IV of Prussia went to see Fry in Newgate Prison during an official visit to Great Britain. The King of Prussia, who had met the social reformer during her previous tours of the continent promoting welfare change and humanitarianism, was so impressed by her work that he told his reluctant courtiers that he would personally visit the gaol when he was in London.[3]

Fry became well known in society[citation needed]. Some people praised her for having such an influential role as a woman[citation needed]. Others alleged that she was neglecting her duties as a wife and mother in order to conduct her humanitarian work[citation needed] One admirer was Queen Victoria, who granted her an audience a few times and contributed money to her cause[citation needed]. Another admirer was Robert Peel who passed several acts to further her cause including the Gaols Act 1823. The act was largely ineffective, because there were no inspectors to make sure that it was being followed.

Following her death in 1845, a meeting chaired by the Lord Mayor of London, resolved that it would be fitting "to found an asylum to perpetuate the memory of Mrs Fry and further the benevolent objects to which her life had been devoted." * A fine 18th-century town house was purchased at 195 Mare Street, in the London Borough of Hackney and the first Elizabeth Fry refuge opened its doors in 1849. Funding came via subscriptions from various city companies and private individuals, supplemented by income from the inmates' laundry and needlework. Such training was an important part of the refuge's work. In 1924, the refuge merged with the Manor House Refuge for the Destitute, in Dalston in Hackney, becoming a hostel for girls on probation for minor offences. The hostel soon moved to larger premises in Highbury, Islington and then, in 1958, to Reading, where it remains today. The original building in Hackney became the CIU New Lansdowne Club but became vacant in 2000 and has fallen into disrepair. Hackney Council, in 2009, was leading efforts to restore the building and bring it back into use. The building did undergo substantial refurbishment work in 2012 but as of July 2013, the entire building is for sale. The building and Elizabeth Fry are commemorated by a plaque at the entrance gateway.

Elizabeth Fry died from a stroke in Ramsgate, England, on 12 October 1845. Her remains were buried in the Friends' burial ground at Barking. Seamen of the Ramsgate Coast Guard flew their flag at half mast in respect of Mrs Fry; a practice that until this occasion had been officially reserved for the death of a ruling monarch.[4] More than a thousand people stood in silence during the burial at the Ramsgate memorial 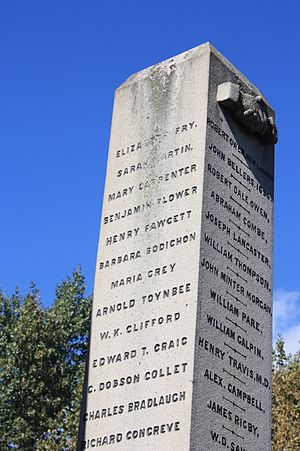 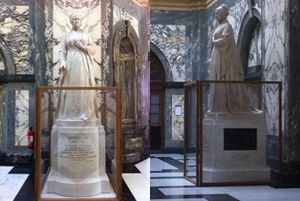 Fry's statue in the Old Bailey

There are a number of memorials which commemorate places where Fry lived. There are plaques located at her birthplace of Gurney Court in Norwich; her childhood home of Earlham Hall; St. Mildred's Court, City of London, where she lived when she was first married; and Arklow House, her final home and place of death in Ramsgate. Her name heads the list on the southern face of the Reformers Monument in Kensal Green Cemetery, London.

Due to her work as a prison reformer, there are several memorials to Elizabeth Fry. One of the buildings which make up the Home Office headquarters, 2 Marsham St, is named after her. She is also commemorated in prisons and courthouses, including a terracotta bust in the gatehouse of HM Prison Wormwood Scrubs and a stone statue in the Old Bailey. The Canadian Association of Elizabeth Fry Societies honours her memory by advocating for women who are in the criminal justice system. They also celebrate and promote a National Elizabeth Fry Week in Canada each May.

Elizabeth Fry is also commemorated in a number of educational and care-based settings. The University of East Anglia's School of Social Work and Psychology is housed in a building named after her. There is an Elizabeth Fry Ward in Scarborough Hospital in North Yorkshire, United Kingdom. A road is named for Fry at Guilford College, a school in Greensboro, North Carolina, which was founded by Quakers. There is a bust of Elizabeth Fry located in East Ham Library, Newham Borough of London.

Quakers also acknowledge Elizabeth Fry as a prominent member. Her grave at the former Society of Friends Burial Ground, located off Whiting Avenue in Barking, Essex, was restored and received a new commemorative marble plinth in October 2003. In February 2007, a plaque was erected in her honour at the Friends Meeting House in Upper Goat Lane, Norwich. Fry is also depicted in the Quaker Tapestry, on panels E5 and E6. She is also honoured by other Christian denominations. In the Lady Chapel of Manchester's Anglican Cathedral, one of the portrait windows of Noble Women on the west wall of the Chapel features Elizabeth Fry.

Since 2001, Fry has been depicted on the reverse of £5 notes issued by the Bank of England. She is shown reading to prisoners at Newgate Prison. The design also incorporates a key, representing the key to the prison which was awarded to Fry in recognition of her work.[5] However, as of 2016, Fry's image on these notes will be replaced by that of Winston Churchill.[6] She was one of the social reformers honoured on an issue of UK commemorative stamps in 1976.