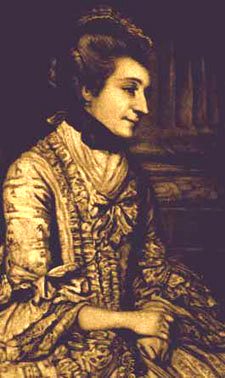 Her parents were both from wealthy families with strong ties to the British peerage and intellectual life. She is sister to Sarah Scott, author of A Description of Millenium Hall and the Country Adjacent. She married Edward Montagu, a man with extensive holdings, to become one of the richer women of her era. She devoted this fortune to fostering English and Scottish literature and to the relief of the poor.

She was born in Yorkshire to Matthew Robinson (1694-1778), of West Layton and Edgeley in Yorkshire, and Elizabeth daughter of Robert Drake, of Cambridge, by his wife Sarah Morris, daughter of Thomas Morris of Mount Morris, Monks Horton. Elizabeth was the eldest of their three daughters. Conyers Middleton, the prominent Cambridge don, was the second husband of her Drake grandmother Sarah Morris.[1] Elizabeth and her sister Sarah, the future novelist Sarah Scott, spent time as children on extended stays with Dr. Middleton, as both parents were somewhat aloof. The two girls learned Latin, French, and Italian and studied literature. As a child, Elizabeth and Sarah, in particular, were very close, but grew apart after Sarah became sick with smallpox.

While young, Elizabeth became a friend of Lady Margaret Harley, later the Duchess of Portland, the only surviving child of Edward Harley, 2nd Earl of Oxford and Earl Mortimer. Lady Margaret and Elizabeth corresponded weekly when apart and were inseparable when together. She spent time with Lady Margaret in London and met many of the celebrated figures of the 1730s, including the poet Edward Young and the religious thinker Gilbert West. In Lady Margaret's household, men and women spoke as equals and engaged in witty, learned banter. Mrs. Montagu later used this model of intellectual discourse in her salons. Visits to Lady Margaret became more important to Elizabeth when her mother inherited a country seat in Kent and made that her home, with the daughters. 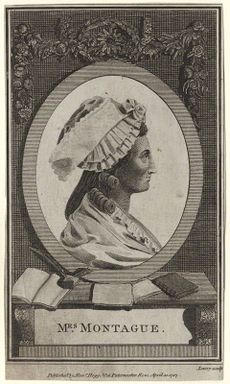 In 1738, Montagu wrote to Harley explaining that she had no desire for men or marriage. She saw marriage as a rational and expedient convention and did not suppose it possible to love a man. In 1742 she married Edward Montagu, grandson of the Edward Montagu, 1st Earl of Sandwich, who owned numerous coal mines and had several rents and estates in Northumberland. She was twenty-two and he was fifty years old. The marriage was advantageous, but it was apparently not very passionate. All the same, she bore a son, John, the next year, and she loved her child immensely. When he died unexpectedly in 1744, she was devastated. She and Edward remained friendly throughout their remaining time together, but there were no more children or pregnancies. Prior to the loss of her son, she had not been very religious, but his death brought her to consider religion more and more. Her sister, meanwhile, Sarah Scott, was growing extremely devout.

Elizabeth kept a female companion with her most of the time. This person was not exactly a servant, but she would act in that role. She would be expected to carry things and aid Elizabeth on her daily round. Barbara Schnorrenberg suggests that Sarah Scott was in this function and says that there is good reason to suggest that she married poorly to escape that situation (Schnorrenberg 723). After Elizabeth's mother died, her father moved to London with his housekeeper, giving no money at all to his children. When Sarah was removed from her bad marriage, Elizabeth's father (whose ward she was) not only gave her no financial help but forbade either Elizabeth or Matthew, her brother, from relieving her distress.

Beginning in 1750, she and Edward established a routine where they would winter in London in Mayfair and then, in the spring, go to Sandleford in Berkshire, which had been his since 1730. He would then go on to Northumberland and Yorkshire to manage his holdings, while she would occasionally accompany him to the family manor-house at East Denton Hall, a clean-lined mansion of 1622 on the West Road in Newcastle upon Tyne.

She was a shrewd businesswoman, despite affecting to patronise Northumbrian society for its practical conversation. Though acting as Lady Bountiful to her miners and their families, she was pleased at how cheap this could be. She was also glad to note that: 'Our pitmen are afraid of being turned off and that fear keeps an order and regularity amongst them that is very uncommon.' Elizabeth enjoyed hearing the miners singing in the pit, but found, alas, that their dialect was 'dreadful to the auditors' nerves.'

Horace Walpole wrote to George Montagu in 1768: 'Our best sun is Newcastle coal.'

In London, Elizabeth began to be a celebrated hostess. She organized literary breakfasts with Gilbert West, George Lyttelton, and others. By 1760, these had turned to evening entertainments with large assemblies. Card playing and strong drink were forbidden from these convocations, which were now known as blue stocking events.

By 1770, her home on Hill Street had become the premiere salon in London. Samuel Johnson, Sir Joshua Reynolds, Edmund Burke, David Garrick, and Horace Walpole were all in the circle. For writers, being introduced there meant patronage, and Montagu patronized a number of authors, including Elizabeth Carter, Hannah More, Frances Burney, Anna Barbauld, Sarah Fielding, Hester Chapone, James Beattie, and Anna Williams. Samuel Johnson's hostess, Hester Thrale, was also an occasional visitor to Hill Street. Among her persistent admirers was the physician Messenger Monsey. Among the blue stockings, Elizabeth Montagu was not the dominant personality, but she was the woman of greatest means, and it was her house, purse, and power that made the society possible. As a literary critic, she was a fan of Samuel Richardson, both Fieldings (Henry Fielding and Sarah Fielding), and Fanny Burney, and she was pleased to discover that Laurence Sterne was a distant relation. She was related to Laurence Sterne through the Botham family. Sterne entrusted her with the disposition of his papers upon his departure for France. He was in ill health and the prospect of his dying abroad was real. She was a supporter of Bishop Percy's Reliques of Ancient English Poetry.

She also held similar events at her residence in the centre house of the Royal Crescent in Bath.[2]

File:Houghton MS Hyde 7 (15) - Montagu, p 1.jpg
First page of a draft manuscript of An Essay on the Writings and Genius of Shakespear, 1769

In 1760, George Lyttleton encouraged her to write Dialogues of the Dead, and she contributed three sections to the work, anonymously (her authorship of these is testified to elsewhere). It is a series of conversations between the living and the illustrious dead and works as a satire of 18th century vanity and manners. In 1769, she published An Essay on the Writings and Genius of Shakespear. In it, she proclaims William Shakespeare the greatest English poet and, in fact, the greatest poet of any nation. She also attacks Samuel Johnson's Preface to Shakespeare from 1765 for not having gone on to praise Shakespeare's plays enough. While Johnson had dealt with text, history, and the circumstances of editing, Montagu wrote instead about the characters, plots, and beauties of the verse in Shakespeare and saw in him a championing of all things inherently English. When the book was initially published anonymously, it was thought to be by Joseph Warton, but by 1777 her name appeared on the title page. Johnson, for his part, was estranged from Montagu at this point.

In the late 1760s, Edward Montagu fell ill, and Elizabeth took care of him, although she resented giving up her freedom. He died in 1775. In 1776, she adopted her nephew, the orphan of her brother. Matthew Robinson, the child, kept his family name, but he was named Elizabeth's heir. At that point, the coal and land holdings Montagu passed on to Elizabeth accounted for an income of £7,000 a year. She managed her wealth and estates well, and by her death her coal income was worth 10,000 pounds a year.

In 1777, she began work on Montagu House in Portman Square in London, moving in in 1781, on land leased for 99 years. She also expanded Sandleford Priory in the 1780s, and had Capability Brown design its garden and alter the park. She died in Montagu House in London on 25 August 1800 and left Sandleford and all of her money to Matthew Robinson, her nephew.

Elizabeth Montagu is author of two works published in her lifetime: three sections in George Lyttleton's Dialogues of the Dead (1760) and An Essay on the Writings and Genius of Shakespeare (1769). In addition, two collections of Montagu's letter were published posthumously.

Dialogues of the Dead was a series of critiques about eighteenth century society. In Dialogue 26, Montagu uses Hercules to engage in a discussion of virtue. In Dialogue 27, a character, Mrs. Mopish, cannot go the Elysian Fields because she is endlessly distracted by worldly influences. In Dialogue 28, a bookseller explains to Plutarch the difficulties of publishing in modern society.

An Essay on the Writings and Genius of Shakespeare defends Shakespeare against criticism by supporters of the French style of drama, particularly against the attacks of Voltaire. In Essay Montagu claims Shakespeare's success comes from his overall virtue and ability to engaging the audiences' emotion, not from strict adherence to the classical models of drama.

Montagu was a copious writer of familial letters to her coterie and beyond. Her letters include discussions of health, domestic arraignments, travel plans, and reports of social events. About one-third of her correspondence focused on culture such as theater, opera, public spectacles, moral philosophy, and divinity.[3] Of these topics, history was discussed more than twice as much as any other topic.[3]

Her most frequent correspondence on literature was with her sister, Sarah Scott, followed by her friends, Elizabeth Carter and Gilbert West.[3] She and Scott were both avid readers of published letters throughout their lives, reading collections by Pope and Swift.[4] This influenced the women’s own letter writing. Their frequency of correspondence waxed and waned over the years depending on the circumstances of their lives;[5] Montagu is recorded to have written Scott more frequently.[3]

Similarly, Montagu is noted to have sent more letters to Elizabeth Carter than to have received them.[3] Montagu was an ardent supporter of Carter despite her friend being of a lower class; Montagu respected Carter's skill and virtue. Montague felt comfortable enough to correspond with Carter about the responsibility of great wealth.[6]

Gilbert West influenced Montagu’s thinking about religion, history, and literature. He also affected her style of writing for a time. Based on his example, she began writing in a more formal syntax, but she eventually became irritated with the restrictions and reverted to her freer, more natural style.[6]

Montagu corresponded with George Lyttelton frequently about literature and history, a relationship which would later lead to Lyttleton including three of her works in his Dialogues of the Dead. Their letters were known to have markedly different tones: hers were serious and intellectual, his responses tended toward flirtatious.[7]

Montagu maintained a close relationship with the elder statesman, William Pulteney, Lord Bath. Their relationship was purely emotional but described as a “pseudo-courtship.” [6]

Lady Margaret Harley was a lifelong friend of Montagu’s. It was Lady Harley to whom Montagu vented her frustrations over the institution of marriage and her desire for a truly companionate marriage—if she must have one at all. Montagu also expressed to Lady Maragaret that marriage should include financial incentive.[5]

A collection of Montagu’s letters were first published 1809 by her nephew and heir, Matthew Montagu, under the title, The Letters of Mrs. Elizabeth Montagu, with Some of the Letters of her Correspondents. The selection of letters reflect a concern for Montagu’s moral reputation. Another edition of her letters was released in 1906 by Matthew’s granddaughter, Emily J. Climenson, and her friend, Reginald Blunt. This revised collection expanded on Montagu’s view of the social world including fashion, politics, and nobility.[3]