From Infogalactic: the planetary knowledge core
Jump to: navigation, search
For her aunt, see Elizabeth of York, Duchess of Suffolk. 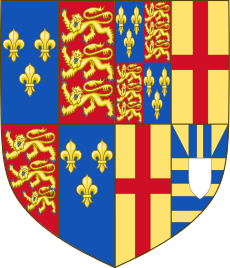 Elizabeth of York (11 February 1466 – 11 February 1503) was queen consort of England from 1486 until her death. As the wife of Henry VII, she was the first Tudor queen. She was the daughter of Edward IV, niece of Richard III and married the king following Henry's victory at the Battle of Bosworth which ended the Wars of the Roses. She was the mother of Henry VIII.

Daughter of the king

Elizabeth of York was born at the Palace of Westminster as the eldest child of King Edward IV and his wife, Elizabeth Woodville. Her christening was celebrated at Westminster Abbey, sponsored by her grandmothers Jacquetta of Luxembourg, Duchess of Bedford, and Cecily Neville, Duchess of York. Her third sponsor was her cousin, Richard Neville, 16th Earl of Warwick.[3]

She was named a Lady of the Garter in 1477, along with her mother and her paternal aunt Elizabeth of York, Duchess of Suffolk. In 1469, she was briefly betrothed to George Neville. His father John later supported George's uncle the Earl of Warwick in rebellion against King Edward IV, and the betrothal was called off. In 1475, Louis XI agreed to the marriage of Elizabeth of York and his son Charles, the Dauphin of France. In 1482, however, Louis XI reneged on his promise.

Sister of the king

On 9 April 1483, Elizabeth's father unexpectedly died and her younger brother, Edward V, ascended the throne. Her uncle, Richard, Duke of Gloucester, was appointed regent and protector of his nephews.[4] Shortly after his brother's death, Gloucester began taking steps to isolate his nephews from their Woodville relations. He intercepted Edward V while he was travelling from Ludlow, where he had been living as Prince of Wales, to London to be crowned king. Edward V was placed in the royal residence of the Tower of London, ostensibly for his protection. Elizabeth Woodville fled with her younger son Richard and her daughters into sanctuary in Westminster Abbey. Gloucester asked to take Richard with him, so the boy could reside in the Tower and keep his brother Edward company. Elizabeth Woodville agreed.

Two months later, on 22 June 1483, Edward IV's marriage was declared invalid. It was claimed that Edward IV had at the time of his marriage to Elizabeth Woodville already been betrothed to Lady Eleanor Butler. Parliament issued a bill, Titulus Regius ("The Title of the King"), in support of this position. This measure legally bastardised the children of Edward IV, made them ineligible for the succession, and declared Gloucester the rightful king. Gloucester ascended the throne as Richard III on 6 July 1483, and Edward V and his brother disappeared shortly afterwards. Rumours began to spread that they had been murdered.[5]

Niece of the king 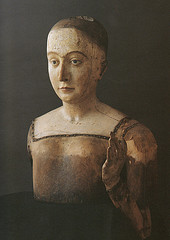 Elizabeth's mother made an alliance with Lady Margaret Beaufort, mother of Henry Tudor, later King Henry VII, who had the closest claim to the throne of those in the Lancastrian party. Although Henry Tudor was descended from King Edward III,[6] his claim to the throne was weak, due to an act of parliament passed during the reign of Richard II in the 1390s that barred accession to the throne to any heirs of the legitimised offspring of his great-great-grandparents, John of Gaunt and Katherine Swynford. Despite this, his mother and Elizabeth Woodville agreed Henry should move to claim the throne and, once he had taken it, marry Elizabeth of York to unite the two rival Houses. In December 1483, in the cathedral in Rennes, Henry Tudor swore an oath promising to marry her and began planning an invasion.

In 1484, Elizabeth of York and her family left Westminster Abbey and returned to court. It was rumoured that Richard III intended to marry her because his wife, Anne Neville, was dying and they had no surviving children. The Crowland Chronicle claimed that Richard III was forced to deny that intention by enemies of the Woodvilles, who dreaded the family's return to royal favour. There is no conclusive evidence, but Sir George Buck (1560-1622) later claimed to have uncovered a letter from Elizabeth indicating that she was involved and willing, although he never produced the supposed letter. Soon after Anne Neville's death, Richard III sent Elizabeth away from court to the castle of Sheriff Hutton and opened negotiations with King John II of Portugal to marry his sister, Joan, Princess of Portugal, and to have Elizabeth marry their cousin, the future King Manuel I of Portugal.[7]

Wife of the king

As the eldest daughter of Edward IV with no surviving brothers, Elizabeth of York had a strong claim to the throne in her own right, but she did not assume the throne as queen regnant. Such a precedent would not truly come to England for another 67 years, when Elizabeth of York's granddaughter, Mary I, acceded to the throne. Henry VII acknowledged the necessity of marrying Elizabeth of York to ensure the stability of his rule and weaken the claims of other surviving members of the House of York, but he ruled in his own right and claimed the throne by right of conquest and not by his marriage to the heir of the House of York. He had no intention of sharing power.[9] He consequently chose to be crowned on 30 October 1485, before his marriage.

Henry VII had the Titulus Regius repealed, thereby legitimising the children of Edward IV, and acknowledged Edward V as his predecessor. After procuring papal dispensation, Cardinal Bourchier, Archbishop of Canterbury, officiated at the wedding of Henry VII and Elizabeth of York on 18 January 1486, in Westminster Abbey. Their first son, Arthur, was born on 20 September 1486. Elizabeth of York was crowned queen on 25 November 1487. Following her coronation, she gave birth to six more children, but only four survived infancy: Margaret, Arthur, Henry and Mary.

Despite being a political arrangement at first, the marriage proved successful and both partners appear to have grown to love each other.[10] Elizabeth of York did not exercise much political influence as queen due to her strong-minded mother-in-law Lady Margaret Beaufort, but she was reported to be gentle, kind, and generous to her relations, servants, and benefactors. When not at official gatherings, she lived a quiet life largely away from politics with three of her children at Eltham Palace. Elizabeth of York enjoyed music and dancing, as well as dicing. She also kept greyhounds.[11]

On 14 November 1501, Elizabeth of York's 15-year-old son Arthur married Catherine of Aragon, daughter of King Ferdinand II of Aragon and Queen Isabella I of Castile. The pair were sent to Ludlow Castle, the traditional residence of the Prince of Wales. Arthur died in April 1502. The news of Arthur's death caused Henry VII to break down in grief, as much in fear for his dynasty as in mourning for his son. Elizabeth comforted him, telling him that he was the only child of his mother but had survived to become king, that God had left him with a son and two daughters, and that they were both young enough to have more children.[12][13] 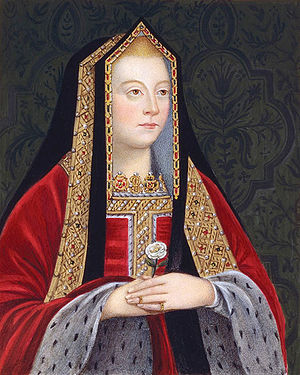 An 18th-century copy of Elizabeth of York as queen: She holds the white rose of the House of York.

Elizabeth of York became pregnant once more and spent her confinement period in the Tower of London. On 2 February 1503, she gave birth to Katherine, but the child died a few days afterwards. Succumbing to a post partum infection, Elizabeth of York died on 11 February, her 37th birthday. Her husband and children appear to have mourned her death deeply. According to one account, Henry Tudor "privily departed to a solitary place and would no man should resort unto him." This is notable considering that, shortly after Elizabeth's death, records show he became extremely ill himself and would not allow any except his mother Margaret Beaufort near him. For Henry Tudor to show his emotions, let alone any sign of infirmity, was highly unusual and alarming to members of his court.

In 2012, an illuminated manuscript that was once the property of Henry VII was rediscovered in the National Library of Wales. It depicts the aftermath of Elizabeth's death vividly. Henry VII is shown receiving the book containing the manuscript in mourning robes with a doleful expression on his face. In the background behind their father are the late queen's daughters, Mary and Margaret, in black veils. An 11-year-old King Henry VIII's red head is shown weeping into the sheets of his mother's empty bed. 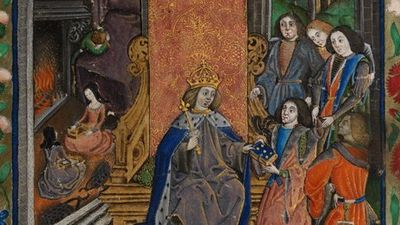 Henry VII and his children after the death of Elizabeth of York: Young Henry VIII is in the top left corner. His father, Henry VII, remained in seclusion for six weeks following her death and likely wore robes like these for quite some time after.

Henry Tudor entertained thoughts of remarriage to renew the alliance with Spain—Joanna, Dowager Queen of Naples (niece of Ferdinand II of Aragon), Joanna, Queen of Castile (daughter of Ferdinand and Isabella), and Margaret, Dowager Duchess of Savoy (sister-in-law of Joanna of Castile), were all considered—–but he died a widower in 1509.

Henry VII likely died in part of a broken heart; evidence indicates his grief over Elizabeth lasted for years. Each year on 11 February, he decreed a requiem mass be sung, the bells be tolled, and 100 candles be lit in honour of Elizabeth of York. The Tower of London was abandoned as a royal residence, evidenced by the lack of records of it being used by the royal family or Henry Tudor after 1503. All future births in the reign of Elizabeth's son, Henry VIII, took place in palaces.[14]

In addition, Henry Tudor's reputation for miserliness and paranoia became markedly worse after the death of Elizabeth of York, as evidenced by the tax collection rolls of the time. He was buried with Elizabeth of York under their effigies in his chapel. Her tomb was opened in the 19th century. The wood casing of her lead coffin was found to have been removed to create space for the interment of her great-great grandson James VI and I.[15] 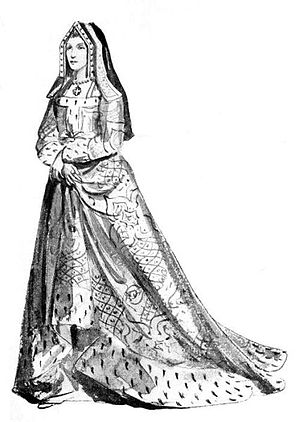 According to folklore, the "queen ... in the parlour" in the children's nursery rhyme "Sing a Song of Sixpence" is Elizabeth of York, while her husband is the king counting his money. The symbol of the Tudor dynasty is the Tudor rose, which became a royal symbol for England upon Elizabeth's marriage to Henry VII in 1486. Her White Rose of York is most commonly proper to her husband's Red Rose of Lancaster and today, uncrowned, is still the floral emblem of England.

Elizabeth of York was a renowned beauty, inheriting her parents' fair hair and complexion. All other Tudor monarchs inherited her reddish gold hair and the trait became synonymous with the dynasty. Elizabeth and Henry VII had seven children:

Elizabeth of York in popular culture 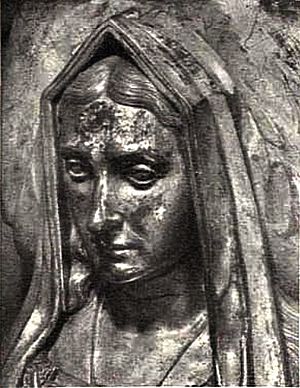 Elizabeth of York's effigy on her tomb