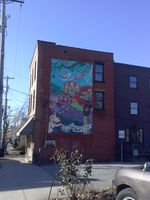 Ellsworth Avenue is located in the Shadyside neighborhood of Pittsburgh, Pennsylvania. It is mostly a commercial street that has locally owned businesses, galleries, restaurants, and bars.[1] It runs southwest-northeast, parallel to Walnut Street, another commercial street, and is bounded by Shady Avenue to the east and South Neville Street to the west. Ellsworth Avenue is one of Shadyside's three business districts, along with South Highland Avenue and Walnut Street.[2]

Several Pittsburgh Historic Landmarks line Ellsworth Avenue. At the corner of Neville and Ellsworth is the Church of the Ascension, an episcopalian church that was named a landmark in 1971.[3] Colonial Place is a mansion designed by George S. Orth that became a landmark in 1898. Roslyn Place and Ellsworth Terrace are also landmarks located here. 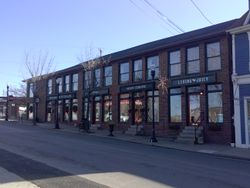 In the 1964, Margo Lovelace bought 58881/2 Ellsworth and started a marionette theatre called the Lovelace Theatre. A mural was painted on a west-facing wall of 5883 Ellsworth Ave to commemorate her contribution to the arts in the region.

Ellsworth has a number of restaurants such as Bites and Brews, Fajita Grill, Open Bottle Bistro, and Umi and Soba, which are part of the Big Burrito Restaurant Group. Food chains located on Ellsworth include the first Crazy Mocha Coffee Company and the Bagel Factory.

Ellsworth also features two of Pittsburgh's gay and gay friendly bars, Spin Bartini and Ultra Lounge and 5801 Video Lounge and Cafe. Other popular bars include Elbow Room and Harris Grill, which has "bacon night" on Tuesdays.[4] 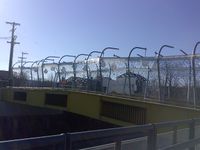 In 2008, the Urban Redevelopment Authority approved a design by Sheila King for a footbridge to connect businesses in the Eastside of Shadyside with Ellsworth Avenue and Saphr Street.[5]

There is a 100-foot long mural dedicated to Martin Luther King Jr. at the corner of Ellsworth Avenue, near the busway stop in East Liberty, that was created in the summer of 2007.[6] The mural begins at Ellsworth, goes along Shady Avenue, and ends at Penn Avenue. The idea for the mural started with local Pittsburgh artist Kyle Holbrook.