Embassy Hill was a short-lived Formula One team started by the two-time Formula One world-champion Graham Hill, racing as a constructor with its own chassis in 1975. The team debuted in 1973 and had limited success in three seasons of racing, but everything was cut short by the death of Hill, Tony Brise and some of the team's top personnel in the crash of a light aircraft in the autumn before the 1976 season. The team was sponsored by Imperial Tobacco's Embassy cigarette brand and ran under various names during its time.

Embassy Racing With Graham Hill first came into being when Graham Hill decided to leave his previous team, Brabham, unhappy with the atmosphere there. He announced in late 1972[1] he was starting his own team, acting as owner and driver. Securing sponsorship from Embassy, Hill started operating a team with cars purchased from Shadow. Things did not go well that year: the team's best finish was ninth at Zolder, being the last finisher among 9 cars (the former World Champion also started 23rd of 23 cars that race).

The chassis for 1974 were bought from Lola, and designated as the Lola T370. Graham Hill drove throughout the season and scored a point at the 1974 Swedish Grand Prix, but this was to be the team's only point that season. The second car was driven by Guy Edwards, and later Peter Gethin and Rolf Stommelen.

The T370 was still being used at the beginning of the 1975 season, until the team's new car was ready. The new car for 1975 was initially designated as the Lola T371,[2] but when designer Andy Smallman left Lola to work full-time for Embassy Hill it was renamed the Hill GH1.[3] Smallman's design drew heavily from the design of previous year's Lola cars.[1]

Unfortunately, the second race of the GH1 at the 1975 Spanish Grand Prix[4] was marred by the collapse of Rolf Stommelen's rear wing mounting, which pitched his car into the crowd and killed four people. Stommelen was injured in the accident and did not return until the second half of the season.

After failing to qualify at the 1975 Monaco Grand Prix, a race he had won five times, Hill no longer drove the cars himself, and his driving role was taken over by Tony Brise. Brise, considered a rising star,[5] finished sixth in the 1975 Swedish Grand Prix and qualified sixth for the 1975 Italian Grand Prix.

Alan Jones took over the second car for most of the races that Stommelen missed; Jones finished fifth place in the 1975 German Grand Prix.

François Migault and Vern Schuppan were also behind the wheel of the second Hill that year.

The GH2 was the first Formula One car that Andy Smallman designed from scratch specifically for Graham Hill's team, and it was intended for use in the 1976 World Championship season.[6] It was intended to replace the previous model, the Hill GH1, which had started life as the Lola T371. The GH2 employed the usual Cosworth DFV engine and Hewland FG400 gearbox, and had extremely flat boxes,[clarification needed] which gave the car a sleek silhouette. Tony Brise began testing in the late summer of 1975 at Silverstone, and the times indicated the team could hope for a successful season.[citation needed]

After the deaths of Graham Hill, Tony Brise, Andy Smallman and Ray Brimble in November 1975, the GH2 project came to a halt. However, a GH2 was still built and is now in a British automobile museum.

End of the team

On the evening of 29 November 1975 Graham Hill was piloting an Embassy Hill Piper Aztec light aircraft from France to London. His passengers were team manager Ray Brimble, team driver Tony Brise, designer Andy Smallman and mechanics Terry Richards and Tony Alcock. They were returning from Circuit Paul Ricard where they had been testing the Hill GH2 car being prepared for 1976. They were due to land at Elstree Airfield before onward travel to London to attend a party. Shortly before 10pm the plane hit trees beside a golf course at Arkley in thick fog. In the ensuing crash and explosion everyone on board was killed.[7][8] As the team now only consisted of the deputy team manager and two mechanics it was impossible to continue.[9][10] 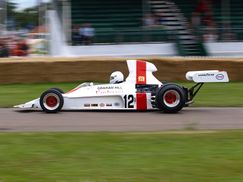