The United States was the first country to "accord de facto recognition" to the newly founded state of Israel on 14 May 1948, immediately following Israel's proclamation of independence.[2] U.S. President Harry S. Truman subsequently announced that there would be an exchange of missions:

On 22 June, Clark Clifford, President Truman's aide, called James G. McDonald telling him that the President wanted McDonald to be the United States' first representative to Israel.[3] During his ambassadorship, McDonald helped strengthen relations between the two governments. For example, in 1950, the United States and Israel entered into an "Aviation Agreement" that allowed Trans World Airlines (TWA) to operate fully out of Israel and El Al to send regular flights to the United States. Ambassador McDonald hoped the signing of the first formal agreement between the two governments would be the first in a series of similar agreements that would gradually bind the two countries and peoples closer together in creative co-operative work.[4]

There is controversy surrounding the Tel Aviv location of the United States embassy because the State of Israel has identified Jerusalem as its capital, citing 3,000 years of Jewish history to buttress the claim. The United States does not recognise Jerusalem as Israel's capital.[5]

Walworth Barbour served as Ambassador of the United States to Israel from 1961–1973, which is when the Embassy re-located to its present location of 71 Hayarkon Street. He assumed his post already very familiar with the Middle East and South Eastern Europe but with "no particular interest in Israel one way or another."[6] Nevertheless, Barbour was Ambassador to Israel for 12 years, and when asked why he stayed so long he answered, "I like it."[6] The American International School in Even Yehuda, Israel is named after him.

The U.S. Embassy in Tel Aviv maintains and promotes diplomatic and people-to-people relations between the United States and Israel. The Embassy has a large staff of officers and specialists who are responsible for all aspects of economic, political, commercial, military, media, educational, cultural, and humanitarian relations. Tel Aviv operates one of the State Department's busiest Non-Immigrant Visa sections, which produces the highest volume of nonimmigrant visas in the Middle East.[7] The American Citizens Services (ACS) office is the State Department's third largest ACS office overseas, and the volume of U.S. passports issued makes Tel Aviv the second largest passport operation in the world.[8]

There is also an American Consular Agent in Haifa.[9]

Press and Cultural Affairs at the U.S. Embassy Tel Aviv

The Office of Press and Cultural Affairs is responsible for embassy communication through its public website and popular social media platforms. The office maintains a Facebook page, a YouTube page, and a Flickr page (see External links). It is also responsible for all communication with media organizations in Israel. The office invites Israelis to participate in professional visits to the United States, conducts exchange programs, showcases American culture through visits of visual and performing artists, and invites academics to speak with students, experts and general audiences. The Embassy reaches thousands of young Israeli Jews and Arabs through English language programs, and provides grants to many non-government organizations involved in co-existence activities.

The American Center in Jerusalem

A public-access American Center in Jerusalem was established in 1968 as part of the embassy’s effort to reach out to Israeli academics and officials. The staff of the American Center design and oversee educational seminars, exchanges, performances, and grant programs in a wide variety of areas, including cultural diplomacy, sports diplomacy, legal issues, diversity, coexistence, women’s issues, human rights, religious tolerance, and English instruction. These activities take place at the Center itself or at partner institutions.[10] The American Center also operates an Information Resource Center, which is open to the public and offers 6,000 reference and circulating books, 1,000 DVDs, 80 periodicals and journals, and access to news and scholarly databases.

The Middle East Partnership Initiative (MEPI) is a U.S. State Department program that supports political and economic reform efforts in the Middle East and North Africa. Run out of the Public Diplomacy office of the U.S. Embassy Tel Aviv, MEPI Israel's projects strive to build a more pluralistic, participatory, and prosperous society in Israel. Specifically, MEPI programming in Israel empowers community leadership, provides educational opportunities, and opens an outlet for civic discourse. To this end, MEPI partners with local organizations to bolster agents of change.

The Fulbright Commission for Israel

The United States-Israel Educational Foundation also operates an EducationUSA Counseling Center which distributes information on post-secondary educational opportunities in the United States. The Counseling Center assists interested candidates in the selection of suitable programs and offers advice in the preparation of application files. The Center provides both group information sessions and individual counseling.[12]

The United States Agency for International Development (USAID) is the principal U.S. assistance agency that extends help to countries recovering from disaster, trying to escape poverty, and engaging in democratic reforms.[14] Although USAID is separate from the State Department, both report to the United States Secretary of State. Since 1994, USAID has worked in the West Bank and Gaza providing more than $3.4 billion in U.S. economic assistance to Palestinians in the areas of water and sanitation, infrastructure, education, health, economic growth, and democracy. USAID also provides assistance for basic human needs in both the West Bank and Gaza, including emergency food, health care, and access to safe water.[15]

U.S. Immigration and Customs Enforcement (ICE) has a Homeland Security Investigations (HSI) Office located within the U.S. Embassy Tel Aviv. As the largest investigative arm of the United States Department of Homeland Security (DHS), HSI enhances U.S. national security by conducting international law enforcement operations. The HSI Office in Tel Aviv partners with their Israeli counterparts to combat criminal organizations and prevent terrorist activities. They are charged with enforcing a wide array of laws, including those related to financial crime, trade fraud, and narcotics and cash smuggling. Aside from Tel Aviv, HSI works with 69 offices in 47 countries around the world.[16]

Federal Bureau of Investigation in Israel

For nearly seven decades, the FBI has stationed special agents and other personnel overseas to help protect Americans back home by building relationships with principal law enforcement, intelligence, and security services around the globe that help ensure a prompt and continuous exchange of information. The FBI Legal Attaché in Israel works with the Israeli law enforcement and security agencies to coordinate investigations of interest to both countries.

U.S. Senior Defense Official/Defense Attaché represents the U.S. Secretary of Defense, the Chairman of the Joint Chiefs of Staff, and the Commander of U.S. European Command in Israel. To accomplish this mission U.S. Defense Attaché Office (DAO) personnel advise the U.S. Ambassador to Israel on military matters, implement a variety of bi-lateral military engagement programs, and thoroughly report political-military developments in a timely manner. The USDAO serves as the primary point of contact for all joint U.S.-Israeli military activities and communications on defense matters between the U.S. government and the Government of Israel. 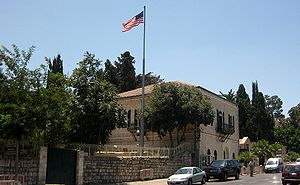 The Jerusalem Embassy Act, passed by Congress in 1995, requires the United States to relocate its embassy in Israel from Tel Aviv to Jerusalem by December 31, 1999 and that Jerusalem be recognized as the capital of Israel. The Embassy remains in Tel Aviv because the Act also allows for the President to "delay the implementation of the law indefinitely if the move presents national security concerns."[17] Presidents Bill Clinton, George W. Bush, and Barack Obama have regularly invoked the clause, delaying the move of the embassy to Jerusalem.

Mike's Place a few days after the suicide bombing

Although Tel Aviv is widely considered one of the safest cities in Israel, there have been some terrorist attacks over the years. Notably during the Second Intifada in 2003, Mike's Place, which is located next door to the U.S. Embassy, was attacked by a suicide bomber. The blast killed three civilians and wounded 50.