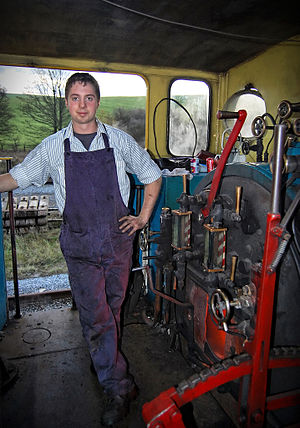 A fireman working aboard a locomotive on the Embsay line, photographed at Bolton Abbey Station in 2009.

The Embsay & Bolton Abbey Steam Railway (E&BASR) is a heritage railway in North Yorkshire, England, (formed in 1968 and re-opened in 1981).

The preserved railway was part of the former Midland Railway route from Skipton to Ilkley (which was closed down by British Railways in 1965 over 15 years before).

The E&BASR currently runs for a total distance of 4 miles (6 km) from Embsay via Draughton Sidings, Holywell and Stoneacre Loop to Bolton Abbey station and carries around 100,000 passengers a year. [1]

The railway has a long-term objective to extend the line in both directions eastwards to the West Yorkshire village of Addingham and southwest towards the North Yorkshire market town of Skipton.[2][3]

The rolling stock on the line consists of 20 ex-industrial locomotives, the oldest of which was built in 1908; three diesel-multiple units; and ten other diesel locomotives. The railway holds annual galas including the popular Diesel Gala and the Harvest of Steam.

Embsay railway station was built in 1888. Bolton Abbey village is named after a nearby ruined 12th century priory, belonging to the Dukes of Devonshire.

The route was formerly part of the Midland Railway line that connected Skipton and Ilkley via Addingham. The line was shut down by British Railways in 1965 and was left to rest in disrepair. Around 14 years later in 1979 a group of volunteers put forward a plan to reopen the line as a preservation route. This plan went ahead and Embsay railway station was refurbished throughout the second half of the 70's and reopened in 1981.

To the west of Embsay station, a run-round loop was built for locomotives to run round. This is near the site of the former Embsay Junction, which was disconnected when the line closed.

By 1987 further extensions brought the line to a newly constructed halt at Holywell and later to Stoneacre Loop. Bolton Abbey railway station finally reopened in 1998, Bringing the current total of over 4 miles in length.

As of 2014, the E&BASR currently plans to extend their services (via the nearby 220 yard Haw Bank tunnel) into Skipton (further up the line, a further 2 miles in length - to whom the railway could interchange with services on the Airedale Line), as well as to reconstruct platform 2 at Bolton Abbey station itself, "as part of a possible extension down to Addingham".

File:Lobb Ghyll Viaduct.jpg
The abandoned Lobb Ghyll viaduct; an incredible five arch construction which is sited on the former line from Embsay to Addingham. It is hidden away in a bluebell wood by the River Wharfe to the south of Bolton Bridge.

Extension to Addingham and Ilkley

As the original line stretched from the North Yorkshire market town of Skipton to the West Yorkshire spa town of Ilkley there was a talk of extending the re-opened track to cover the original extent (in the past) prior to its closure by British Railways in 1965.

Taking the line to Addingham and re-opening Addingham is often mentioned as a potential project but the line's owners have said that they intend to settle down and consolidate the current route, respectively.[4]

However Sustrans are interested in converting the route into a cycle path, but would provide formation space for a single track allowing any extension to be built.[5]

The Addingham extension could start off as an extension to a possible halt (Wharfe Riverside) (located near Bolton Bridge close by[clarification needed]), before Addingham could be considered officially.

The embankment supporting Addingham railway station, goods yard and depot was removed and replaced in the 1980s with a housing development, with the bridge and abutments over the main road demolished at around the same time.

There are plans to rebuild one of the bridge abutments at the end of the surviving embankment to the north as part of the Addingham Project which also involves constructing a replica LMS style station, goods yard and depot on the extra land next to and at the edge of the embankment.

These would be over the main road from the now defunct former station and goods depot, Funding would have to be made for next couple of 10 to 15 years before any project like this would happen.

Much of the route between Addingham and Ilkley has been re-developed since abandonment. Cuttings have been filled in and Ilkley viaduct was demolished in 1973 (six years before the E&BSR re-opened).

The Skipton platforms at Ilkley station now form the station's car park and there has been significant building development in Ilkley town centre on the former trackbed. Therefore, it is unlikely that this section will be reinstated as preserving the whole line between Ilkley and Skipton was considered too expensive.

There is currently no link between the Heritage line and the Network Rail branch line to Swinden Quarry (the former Yorkshire Dales Railway), the points at this site having been dismantled. Re-instating this link would allow trains to serve Skipton station, and would potentially offer greater access to the railway.[6]

The platforms at Skipton (5 & 6) that served the Ilkley route were made redundant in 1965. If this link were reinstated these platforms would need to be rebuilt as they have been disused for a very long time.

In 1982 there were plans to extend the line up to Skipton, as a special DMU service was running at the time.[citation needed] Unfortunately British Rail was still using the section between the two stations for its operations to Swinden Quarry (as the old Grassington branch was and is still part of the rail network), so plans were dropped, stating that operating as far as Skipton whilst sharing the line with the goods operation was too problematic.

Network Rail has carried out a survey for the reinstatement of the connecting points between the Heritage line at Embsay and the freight line to Rylstone, and the reinstatement of the platforms 5 and 6 at Skipton, costing between £1.1  million and £2.6 million.[6] If funding is made available, then the line could be extended.[7] JMP Consulting has been commissioned to develop a business case for the project[6]

There are also plans for a proposed Wharfe Riverside halt close to the old Lobb Ghyll Viaduct halfway between Bolton Abbey and Addingham stations.[citation needed]

In 1986, whilst footbridgeless at the time, Embsay railway station itself appeared in an episode of the final series of the Yorkshire Television sitcom In Loving Memory as the fictional Oldshaw railway station, in which Ernie Hadfield (Colin Farrell) accidentally led the group on a short cut over the track, resulting in a coffin becoming stuck on the trackbed, which is then crushed by an oncoming train, carrying the deceased from the coffin in front.

The railway was also the filming location of an episode of Emmerdale (also a Yorkshire Television programme). In the episode, Embsay station was made to look like the fictional Hotten station. Many of the shows's famous characters were at the filming. The episode was filmed in December 2004.[8]

The railway has even appeared on the BBC Television documentary programme (Great British Railway Journeys) presented by Michael Portillo.

The route runs through the countryside of the Yorkshire Dales on the border between the county council areas of North Yorkshire and West Yorkshire.

The railway has helped and supported the surrounding area (and local economy) to regenerate and provide brand new attractions, boosting both all trade and tourism.

Stoneacre. Run-round loop along the route.