From Infogalactic: the planetary knowledge core
Jump to: navigation, search
For other uses, see Emden (disambiguation).

Emden is a town and seaport in Lower Saxony in the northwest of Germany, on the river Ems. It is the main town of the region of East Frisia and, in 2011, had a total population of 51,528. 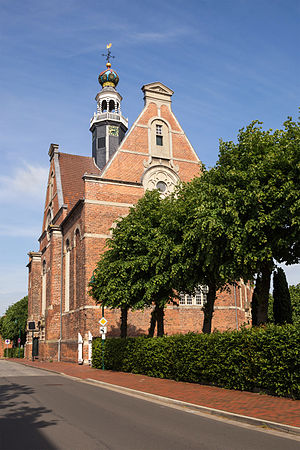 The exact founding date of Emden is unknown, but it has existed at least since the 8th century. Older names for Emden are Amuthon, Embda, Emda, and Embden. Town privilege and the town's coat of arms, the Engelke up de Muer (The Little Angel on the Wall) was granted by Emperor Maximilian I in 1495.

In the 16th century, Emden briefly became an important centre for the Protestant Reformation under the rule of Countess Anna von Oldenburg who was determined to find a religious "third way" between Lutheranism and Catholicism. In 1542 she invited the Polish noble John Laski (or Joahannes a Lasco) to become pastor of a Protestant church at Emden; and for 7 years he continued to spread the new religion around the area of East Frisia. However in 1549 following pressure from the Emperor Charles V, the Countess was forced to ask Laski to leave for England and the experiment came to an end. Nevertheless, the legacy was important for the reformation in the Netherlands.

Emden was a very rich town during the 17th century, due to large numbers of Dutch immigrants such as Diederik Jansz. Graeff. It was a centre of reformed Protestantism at that time, producing the first Bible translation in Dutch.

In 1744 Emden was annexed by Prussia. In 1752 Frederick the Great chartered the Emden Company to trade with Canton, but the company was ruined when Emden was captured by French forces in 1757 during the Seven Years' War. The town was recaptured by Anglo-German forces in 1758 and for the rest of the conflict was used as a major supply base by the British to support the ongoing war in Westphalia.

During the Napoleonic French era, Emden and the surrounding lands of East Frisia were part of the short-lived Kingdom of Holland.

Industrialization started at around 1870, with a paper mill and a somewhat bigger shipyard. At the end of the 19th century, a big canal, the Dortmund-Ems Canal was constructed, which connected Emden with the Ruhr area. This made Emden the "seaport of the Ruhr area"—which lasted until the 1970s. Coal from the south was transported to the North Sea port, and imported iron ore was shipped via the canal towards Rhine and the Ruhr. The last iron ore freighter was moored in the port of Emden in 1986.

The town centre was almost completely wiped out as a result of Allied bombing raids during the Second World War, destroying nearly all historic buildings. The RAF first bombed Emden on 31 March 1940. The most severe bombing took place on 6 September 1944, when roughly 80 percent of all houses in the town centre were destroyed. In the collective memory of the town, this date still plays an important role. The shipyard area was largely untouched – the British targeted the civilian areas, apparently in revenge for the bombing of Coventry by the Luftwaffe.[citation needed] The reconstructed town was opened on 6 September 1962, exactly 18 years after the bombing.

The main industries in Emden are automobile production and shipbuilding. Volkswagen runs a large production plant which builds the Volkswagen Passat car and which employs around 10,000 people. Emden is also one of the three main ports for car shipping in Europe (together with Zeebrugge in Belgium and Bremerhaven in Germany). More than 850,000 cars were imported and exported in 2005. The Nordseewerke shipyard, a subsidiary of ThyssenKrupp, employs around 1,400 dockers and specializes in conventional submarines. It also produces different kinds of cargo ships as well as ships for special purposes such as icebreakers, dredgers and other ships of that type.

Another important economic sector is tourism, mainly as a day trip destination for tourists staying in the surrounding villages on the North Sea coastline.

A university of applied sciences (Fachhochschule) was opened in 1973. At present, around 4.240 students are enrolled, most of them studying for technical degrees.

The highest playing football (soccer) club is BSV Kickers Emden. The capacity of the stadium is 7,200, due to safety objections of the German Football Association. In 1994, some 12,000 spectators followed a match against the reserves squad of Hamburger SV, which still is the record. In that season, Kickers Emden became the champion of the 3rd League, but failed to be promoted to the Second League since the team lost the promotion round.

Since Emden is not only located close to the North Sea, but also to the river Ems and various small rivers and canals, boat sports are very popular among inhabitants and tourists.

Ships and places named after the town 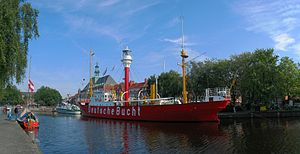 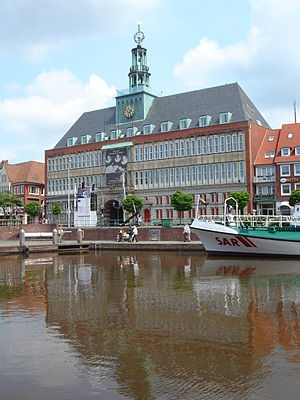 In addition, the village of Emden, Illinois in the United States was named after Jacob Emden[3] due to the large number of emigrants from Emden to the village in northwestern Logan County, Illinois. Another namesake town in the USA is the unincorporated town of Embden, North Dakota (the b added to correct the pronunciation).[4]

Emden is twinned with: