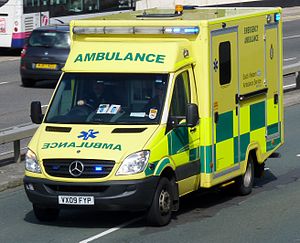 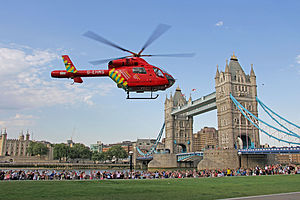 The London Air Ambulance in action

Emergency medical services in the United Kingdom provide emergency care to people with acute illness or injury and are predominantly provided free at the point of use by the four National Health Services of England, Scotland, Wales, and Northern Ireland. Emergency care including ambulance and emergency department treatment is free to everyone, regardless of immigraton or visitor status.[1]

The NHS commissions most emergency medical services through the 14 NHS organisations with ambulance responsibility across the UK (11 in England, 1 each in the other three countries), although there is both subcontracting to, and direct commissioning of, private and voluntary ambulance services to respond to some calls.

As with other emergency services, the public normally access emergency medical services through one of the valid emergency telephone numbers (either 999 or 112).[2]

In addition to ambulance services provided by NHS organisations, there are also some private and volunteer emergency medical services arrangements in place in the UK, including all air ambulances (except those operated by the Scottish Ambulance Service), the use of private or volunteer ambulances at public events or large private sites, and as part of community provision of services such as community first responders.

Role of the ambulance services 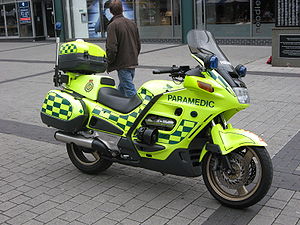 A paramedic's motorcycle in Birmingham

Public ambulance services across the UK are required by law to respond to four types of requests for care,[3] which are:

Ambulance trusts and services may also undertake non-urgent patient transport services on a commercial arrangement with their local hospital trusts or health boards, or in some cases on directly funded government contracts,[4] although these contracts are increasing fulfilled by private and voluntary providers.

The National Health Service Act 1946 gave county and borough councils a statutory responsibility to provide an emergency ambulance service, although they could contract a voluntary ambulance service to provide this, with many contracting the British Red Cross, St John Ambulance or another local provider. The Regional Ambulance Officers’ Committee reported in 1979 that “There was considerable local variation in the quality of the service provided, particularly in relation to vehicles, staff and equipment. Most Services were administered by Local Authorities through their Medical Officer of Health and his Ambulance Officer, a few were under the aegis of the Fire Service, whilst others relied upon agency methods for the provision of part or all of their services.”

The 142 existing ambulance services were transferred by the National Health Service Reorganisation Act 1973 from local authority to central government control in 1974, and consolidated into 53 services under regional or area health authorities.[5]

This led to the formation of predominantly county based ambulance services, which gradually merged up and changed responsibilities until 2006, when there were 31 NHS ambulance trusts in England.

The June 2005 report "Taking healthcare to the Patient", authored by Peter Bradley,[6] Chief Executive of the London Ambulance Service, for the Department of Health led to the merging of the 31 trusts in to 13 organisations in England,[7] plus one organisation each in Wales, Scotland, and Northern Ireland. Following further changes as part of the NHS foundation trust pathway, this has further reduced to 10 ambulance service trusts in England, plus the Isle of Wight which has its own provision.

Following the passage of the Health and Social Care Act 2012, commissioning of the ambulance services in each area passed from central government control in to the hands of regional clinical commissioning groups.

The commissioners in each region are responsible for contracting with a suitable organisation to provide ambulance services within their geographical territory. The primary contract for each area is currently held by a public NHS body, of which there are 11 in England, and 1 each in the other three countries.

In England there are now ten NHS ambulance trusts, as well as an ambulance service on the Isle of Wight, run directly by Isle of Wight NHS Trust, with boundaries generally following those of the former regional government offices. The ten trusts are:

The English ambulance trusts are represented by the Association of Ambulance Chief Executives (AACE), with the Scottish, Welsh and Northern Irish providers all associate members.

The service was operated before reorganisation in 1974 by the St Andrews’ Ambulance Association under contract to the Secretary of State for Scotland.[5] The Scottish Ambulance Service is a Special Health Board that provides ambulance services throughout whole of Scotland, on behalf of the Health and Social Care Directorates of the Scottish Government.[8]

Due to the remote nature of many areas of Scotland compared to the other Home Nations, the Scottish Ambulance Service has Britain's only publicly funded air ambulance service, with two Eurocopter EC 135 Helicopters and two Beechcraft B200C King Air fixed-wing aircraft. There is also a partnership to provide the Emergency Medical Retrieval Service which gives rapid access to the skills of a consultant in emergency or intensive care medicine using Scottish Ambulance Service road and air assets.[9]

The ambulance services across England have been increasingly busy, with a significant increase in calls in the last two decades,[7] as shown in the table below:

There is a large market for private and voluntary ambulance services, with the sector being worth £800m to the UK economy in 2012.[15] Since April 2011, all ambulance providers operating in England have been required by law to be registered with the Care Quality Commission, under the same inspection regime as NHS services, and there are currently around 250 credentialled providers.[16]

The primary activities of the private and voluntary services include:

There is a duty on Category 1 responders (including the NHS) to make appropriate arrangements for major incidents, and as such private and voluntary ambulance services are generally included as part of local planning for the provision of ambulance services during major incidents, such as mass casualty events (including 7 July 2005 London bombings), adverse weather, or severe staff shortage.

Private ambulance services are common the UK, with over 200 providers, and their use under contract to the NHS to answer 999 calls has been growing year on year,[18] with every NHS ambulance trust using private providers in each year from 2011−2014, and contracted providers answering three quarters of a million 999 calls in that three-year period.[19] Expenditure on private ambulances in England increased from £37m in 2011−12 to £67.5m in 2013/4, rising in London from £796,000 to more than £8.8m.[20] In 2014−15, these 10 ambulance services spent £57.6 million on 333,329 callouts of private or voluntary services - an increase of 156% since 2010−11.[14] This use of private contractors for frontline services has been politically controversial,[21][22] although 56% of the British public believe that greater private sector involvement will help maintain or improve standards in the NHS.[23]

In 2013, the CQC found 97% of private ambulance services to be providing good care.[16] These private, registered services are represented by the Independent Ambulance Association.

There are also a number of unregistered services operating, who do not provide ambulance transport, but only provide response on an event site. These firms are not regulated, and are not subject to the same checks as the registered providers, although they may operate similar vehicles, and offer near identical services.[17] 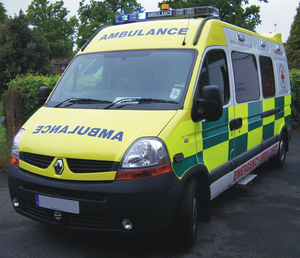 As they are in direct competition for work with the private ambulance providers, the voluntary providers do operate with some paid ambulance staff to fulfil their contracts.

There are a number of smaller voluntary ambulance organisations, fulfilling specific purposes, such as Hatzola who provide emergency medical services to the orthodox Jewish community in some cities.[25] [26][27][28][29] These have however run into difficulties due to use of vehicles not legally recognised as ambulances.[30]

With the exception of Scotland, where the Scottish Ambulance Service provides air ambulances, all UK air ambulances are funded by charitable organisations, and operated by private contractors, with medical staff usually seconded from the local NHS ambulance trust.

All emergency medical services in the UK are subject to a range of legal and regulatory requirements, and in many cases are also monitored for performance. This framework is largely statutory in nature, being mandated by government through a range of primary and secondary legislation.

This requires all providers to register, to meet certain standards of quality, and to submit to inspection of those standards.[31] Organisations not meeting the standards can be sanctioned, or have their registration removed, preventing them from offering any medical services.

The CQC replaced the previous regulator of England's NHS ambulance services, the Healthcare Commission, with its remit expanded to include all private and voluntary providers. Independent ambulance services have only been subject to formal regulation since 2011.[31]

The performance of every NHS ambulance provider is measured and benchmarked by the government. Commonly called 'ORCON',[32] after the consultancy used to formulate them, the New Ambulance Performance Standards (NAPS) were developed in the 1990s, and merged in to the Clinical Quality Indicators (CQI) used today.

The benchmarked targets include:[2]

Every ambulance provider is responsible to the CQC for compliance with best practice. Best practice guidance is published by the Joint Royal Colleges Ambulance Liaison Committee (JRCALC), and most providers follow the majority of this issued guidance.

There are a range of staff grades who work in emergency medical services in the UK. The majority of staff fall in to four main categories (in descending skill order):

In 2014/5 Ambulance Trusts were forced to look overseas to fill vacancies for paramedics. Only one was recruited from outside the UK in 2013-4 but 183 had been recruited since April 2014. Of these 175 were recruited by the London Ambulance Service from Australia. Across England, ambulance services reported that 1,382 of 15,887 posts were vacant – a rate of 9%.[34]

Other roles within the NHS Ambulance Services include Ambulance Nurse (presently only employed by South Central Ambulance Service and identical in role to Paramedic, allowing interchangeability), Emergency Care Practitioner and similar Specialist Paramedic/Nurse roles with a focus on admission avoidance, and a broad range of support staff.

The British Association for Immediate Care coordinates voluntary schemes, and individual medical and allied health professionals, providing immediate care throughout the UK.[35] BASICS doctors, nurses or paramedics may assist NHS paramedics at the scenes of serious accidents or be on-hand at major sporting events. 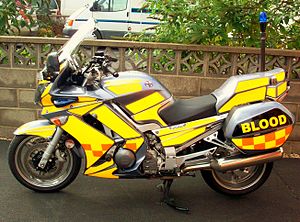 Across Great Britain, there is a network of volunteer Blood Bikes groups who provide motorcycle courier services for blood, tissue and organs which require transport to, or between, hospitals. In most cases, they carry blue lights and sirens which can be used when transporting blood or human tissue for transplant. There is a national organisation representing these groups, called the Nationwide Association of Blood Bikes (NABB).[36]

Volunteer community first responders (CFRs) are now common place resources for NHS Ambulance Service. CFRs are members of the public who have received training to answer ambulance 999 calls, and respond immediately within their local area, during their own time. The schemes originated to provide defibrillation in rural and remote areas, where ambulances could not quickly respond, although they are now present in both rural and urban areas.

CFRs are often operated by a local group, in partnership with the regional NHS ambulance trust, and carry a defibrillator and oxygen, along with other equipment as decided by the clinical governance arrangements. Some schemes have their own vehicles and actively fundraise to support their schemes.

In more rural areas where ambulance responses can take longer, fire personnel have been trained in basic first aid and pain management. They are trained in CPR, use of an AED, oxygen and entonox. They normally take a call from the ambulance Emergency Operations Centre and respond in a car fitted with blue lights, sirens and ambulance / fire service livery. This service is normally staffed by retained firefighters.