Emerson Park is a London Overground station serving the Emerson Park neighbourhood of the London Borough of Havering in north-east London. The station is on the Romford to Upminster Line and is the only intermediate station on that single-track line, 1 mile 64 chains (2.9 km) down-line from Romford. The station was opened as Emerson Park Halt in 1909 by the London, Tilbury and Southend Railway on a branch line which had connected Romford with Upminster and Grays since 1893.

The station has been managed by London Overground since May 2015, which also provides the train services. Emerson Park has no station buildings other than a platform canopy over the single platform. It has very low, but growing, usage for a suburban railway station with 127,298 passenger entries/exits in 2013/14.

The Romford to Upminster Line was constructed in 1893 as a branch of the London, Tilbury and Southend Railway (LT&SR). Property development in the immediate area and in 1908 the proposed new railway station at Gidea Park on the Great Eastern Railway (GER) prompted the LT&SR to construct a station on their branch. The station was opened on 1 October 1909 as Emerson Park Halt[4] on the branch line from Romford to Grays via Upminster, where it connected with the main route from London Fenchurch Street. A run round loop was constructed 500 yards to the west to enable extra trains to run between Emerson Park and Upminster. When push-pull working began in 1934 the loop was not needed and taken out c. 1936.[5] Originally named Emerson Park Halt, and shown in some timetables and on some signage throughout its history as Emerson Park & Great Nelmes, the station name was later simplified to Emerson Park, but the date of this change is not recorded.[4] Even though the station has long been called Emerson Park, one former platform sign installed by National Express East Anglia in the late 2000s read: "Welcome to Emerson Park Halt". 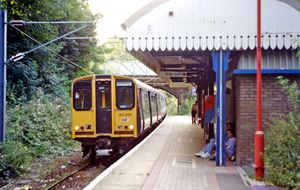 The station consists of a side platform located to the north of the single track. Access to the street is provided by a ramp. The station is of basic design and has no buildings other than a platform canopy. There are Oyster card validators and a ticket vending machine. A digital display board underneath the canopy provides departure information.

London Buses routes 165, 256 and 370 serve the station, providing connections to Ardleigh Green, Harold Wood, Hornchurch, Lakeside Shopping Centre, Rainham, Romford and Upminster.[6] It is one of three stations in the Hornchurch area, all some distance from the town centre; the others are Hornchurch and Upminster Bridge, both on the London Underground's District line. 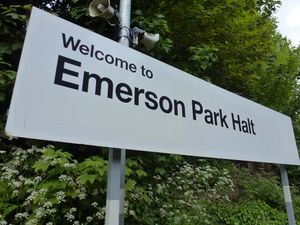 Former "Halt" signage in 2014, before the station transferred to London Overground 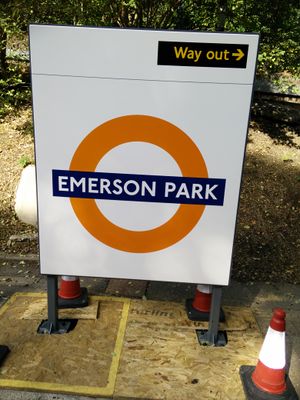 In May 2015 the station transferred from Abellio Greater Anglia operation to London Overground.[7][8] Since then, services run Monday to Saturday between approximately 6:15 am and 10 pm and on Sundays from approximately 8:45 am to 8 pm.[9] Oyster pay as you go has been available at the station since 2010. The total numbers of passenger entries and exits at the station during the year are:

During the 2013/14 year there were 127,298 passenger entries and exits at the station, continuing a trend of growth over the preceding years.