Emil Dominik Josef Hácha (12 July 1872 – 27 June 1945) was a Czech lawyer, the third President of Czechoslovakia from 1938 to 1939. From March 1939, his country was under the control of the Germans and was known as the Protectorate of Bohemia and Moravia.

Emil Hácha was born on 12 July 1872 in the South Bohemian town of Schweinitz in Böhmen.[1] He graduated from a secondary school in Budweiss and then applied for the law faculty at the University of Prague. After finishing his studies in 1896 (JUDr.) he worked for the Country Committee of the Kingdom of Bohemia in Prague (a self-government body with quite limited power). Shortly after the outbreak of World War I, he became a judge at the Supreme Administrative Court in Vienna (the court was responsible for Cisleithania). He met Ferdinand Pantůček there.

After the Treaty of Versailles, Pantůček became President of the Supreme Administrative Court of the Republic of Czechoslovakia in Prague, and Hácha became a judge (1918) and Deputy President (1919) of the court. After Pantůček's death in 1925 he was chosen by T. G. Masaryk as his successor,[citation needed] becoming first President of the Supreme Administration Court.[1] He became one of the most notable lawyers in Czechoslovakia,[2] a specialist in English common law and international law. He was also a translator of English literature (most notably the Three Men in a Boat by Jerome K. Jerome), collector of art and a poet. His book Omyly a přeludy Errors and Delusions was published in 1939 anonymously, then later under his own name in 2001.[3] He also became a member of the Legislative Council. 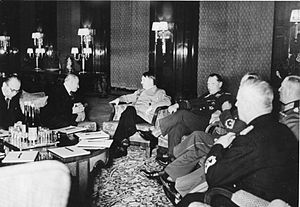 After the Treaty of Munich (Munich Agreement), Hácha was chosen as successor to Edvard Beneš on 30 November 1938 as President of Czechoslovakia.[1] He was chosen because of his Catholicism, conservatism and lack of involvement in any of the governments that had led to the disastrous partition of the country.

In the evening of 14 March 1939, Hitler summoned President Hácha to the Reich Chancellery in Berlin.[1] Hitler deliberately kept him waiting for hours, while Hitler watched a film.[4] Finally, at 1:30 a.m., on 15 March 1939, Hitler saw the President. He told Hácha that as they were speaking, the German army was about to invade Czechoslovakia.[1] All of Czechoslovakia's defences were now under German control following the Munich Agreement in September of the previous year. The country was virtually surrounded by Germany on three fronts.

Hitler now gave the President two options: cooperate with Germany, in which case the "entry of German troops would take place in a tolerable manner" and "permit Czechoslovakia a generous life of her own, autonomy and a degree of national freedom..." or face a scenario in which "resistance would be broken by force of arms, using all means." By four o'clock, after suffering a heart attack induced by Göring's threat to bomb the capital, Hácha contacted Prague, effectively "signing Czechoslovakia away" to Germany.[5] French Ambassador Robert Coulondre reported that by half past four, Hácha was "in a state of total collapse, and kept going only by means of injections."[6]

After the occupation of the remnants of Czechoslovakia on 16 March,[7] Hácha retained his office as President but was forced to swear an oath to Hitler, who appointed Konstantin von Neurath as Protector of Bohemia and Moravia.[8] He protested against the German policies and Germanization of former Czechoslovakia[citation needed] to little effect. He also secretly cooperated with the exiled government of Beneš.[citation needed]

Hácha's situation changed after Reinhard Heydrich was appointed Deputy Protector of Bohemia and Moravia, as Neurath was considered not harsh enough by Hitler. Hácha lost all remaining influence over the matters in his country and became a puppet. Many of his colleagues and friends were arrested (including the Prime Minister Alois Eliáš) and shot or sent to concentration camps. Because of the effectiveness of the terror campaign started by Heydrich, Hácha felt that collaboration with the German occupiers was the only way he could help his people and nation.[citation needed]

After the death of Heydrich, the new Deputy Protector was Kurt Daluege. Hitler had originally planned to execute 10,000 Czechs in reprisal for the murder of Heydrich and warned Hácha that if another such incident occurred "we should have to consider deporting the whole Czech population".[9] This threat was made at Heydrich's funeral.[10]

According to some post-war historians, Hácha was not responsible for his actions,[citation needed] given his old age and failing mental faculties. In any case, his influence on German policies was close to none after 1941 and almost certainly earlier. On 9 May 1945, Prague was liberated by the Red Army during the Prague Offensive. Emil Hácha was arrested on 13 May and transferred immediately to Pankrác Prison. He died in prison on 27 June[1][11] under mysterious circumstances, with many historians entertaining the possibility of assassination,[citation needed] a suspicion shared by the Hácha family. After his death, he was buried at first in an unmarked grave at the Vinohrady Cemetery, but now there is a marker on his grave.[11] 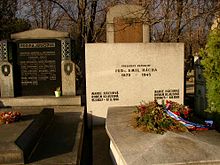