Emilio Arturo Izaguirre Girón (Spanish pronunciation: [eˈmiljo iθaˈɣire]; born 10 May 1986) is a Honduran footballer who plays as a left back for Scottish Premiership side Celtic and for the Honduras national team.

He started his career at Motagua, where he stayed for seven years. In 2010, Celtic spent £1.50m to sign him, and he picked up four major player awards in the 2010–11, first season in Scotland. He has played over 200 games across all competitions for Celtic, winning honours including four consecutive league titles.

A full international with over 80 caps since his debut in 2007, Izaguirre has represented his country at two World Cups and the 2007 Gold Cup.

Izaguirre began his career at Motagua in the Honduran League. He made his league debut on 20 March 2004 in the 3–0 victory over Universidad in Danlí.[2]

On 22 July 2008, he had a 17-day trial with English Championship outfit Ipswich Town, but was unable to play in any matches,[3] having not received international clearance from Motagua. He therefore failed to win a contract and the move fell through.[4] The following April, he was close to a move to Belgium's RSC Anderlecht.[5]

In July 2010, it was reported that Toronto FC of Major League Soccer were interested in signing Izaguirre to a designated player contract, after two stand out performances in the CONCACAF Champions League against the Canadian side,[6] but this move did not happen either.

Izaguirre agreed a four-year contract with Scottish Premier League side Celtic on 18 August 2010, subject to receiving a work permit.[7] He signed for an undisclosed fee[4][8] and was given the number 3 shirt.[3] He made his SPL debut in a 1–0 victory at Motherwell on 29 August,[9] giving a solid performance that drew plaudits from Celtic manager Neil Lennon[10] and Motherwell counterpart Craig Brown.[11][12] On 19 September, Izaguirre set up Anthony Stokes for the winning goal in a 2–1 victory over Kilmarnock at Rugby Park.[13] On 30 October, he scored his first Celtic goal against St Johnstone, where he intercepted a back pass then flicked the ball over St Johnstone centre back Dave MacKay,[14][15] before slotting a goal under the goalkeeper. The game ended 3–0 to Celtic, with Izaguirre awarded man of the match for his performance.[16] In Celtic's 3–0 victory over Rangers on 20 February 2011, he set up Gary Hooper's second goal.[17]

In the 2011 League Cup Final defeat to Old Firm rivals Rangers, Izaguirre was sent off in extra time for a foul on Vladimír Weiss.[18][19] On 6 April 2011, he had another man of the match performance against Hibernian in a 3–1 victory,[20] setting up Stokes for the first goal of the game.[21] In the 2010–11 SPL season, Izaguirre achieved a clean sweep of available senior player awards as chosen by players, organisations and the Celtic supporters. Izaguirre won both the SPFA Players' Player of the Year[22] and Scottish Premier League Player of the Year[23] awards for 2010–11. The judging panel for the latter award described Izaguirre as a "class act",[23] while Celtic assistant manager Johan Mjallby commented that Izaguirre could become one of the best players in his position in world football.[22] On 8 May, at Celtic's award ceremony, Izaguirre picked up the Players' Player of the Year Award.[24] Finally, he was voted Scottish Football Writers player of the year.[25]

Izaguirre suffered a broken ankle in the second match of Celtic's season on 7 August against Aberdeen,[26] requiring surgery which ruled out for between four and six months.[27] On 27 August, he signed a new contract with Celtic, due to run until 2015.[28] Izaguirre returned to training, after recovering from his ankle injury, in December.[29] He made his long-awaited return as a substitute on 2 January 2012 in Celtic's 3–0 win over Dunfermline Athletic at East End Park.[30]

Izaguirre played 32 league games as he won a second consecutive Scottish league title, and also featured in the 2013 Cup final, a 3–0 win over Hibernian on 26 May.[31] 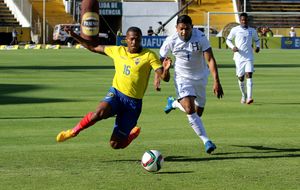 Izaguirre was part of the national team in the 2005 FIFA World Youth Championship in the Netherlands.[33]

He made his senior debut for Honduras in a January 2007 friendly match against Denmark. He has represented his country in 17 FIFA World Cup qualification matches[34] and played at the 2007[35] and 2009 UNCAF Nations Cups[36] as well as at the 2007 CONCACAF Gold Cup.[37]

He was also named in the Honduras squad for the 2010 World Cup, playing two games against Chile and Spain.[8]

Izaguirre is known to live a modest lifestyle and observe the Christian faith.[40][41]